In 2000 there were just 10m mobile phone subscribers in Africa. The industry was just picking up and the pricey gadgets were still a preserve of the rich. And although it was thought the industry had positive prospects, few people anticipated the kind of growth that has been witnessed in the last decade. 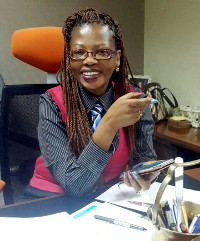 It was around this time that Esther Muchemi quit her 20-year career as an auditor to open a shop selling airtime, mobile phones and SIM cards. People around her were shocked. “They were wondering why anyone would leave a well-paying and prestigious job to become a shopkeeper, a dukawalla. Starting Samchi Telecom was literally opening a shop,” she recalls.

Over the years Samchi Telecom has worked with mobile network operator Safaricom and was the pioneer dealer to roll out mobile money transfer service M-Pesa. The company has been ranked by Safaricom as the top M-Pesa agent and airtime dealer in the country, and this year Muchemi was a finalist in the EY Entrepreneur of the Year Awards’ Eastern Africa chapter.

“I always ask myself, ‘how would my life be if I never made that move?’. I am able to educate my children in the best universities wherever in the world. I am able to give back to society and I have created more than 500 jobs. I think not taking that step would have been a big regret in my life,” says Muchemi.

The Samchi Group CEO says she was inspired to venture into entrepreneurship because she could see immense opportunity in the telecoms industry.

“There was also something unsettling in me. Accounting is good and it certainly helped me to be successful in entrepreneurship, but I wanted to achieve bigger. I could honestly see limitations in my profession because there was too much passion in me not being fulfilled by that environment.”

Although some may think she was lucky to have been at the right place at the right time, Muchemi explains it has not been a rosy affair. “I have gone through difficult times, I have had moments where I felt overwhelmed and wondered ‘what did I get myself into?’ But there has never been a moment when I thought of giving up.”

She says one reason why the group has been successful is because she does not shy away from taking risks. When M-Pesa launched Samchi Telecom was the first dealer to roll out the service in its more than 30 stores. This was expensive for the young company, and at times mistakes were made that led to losses. “I don’t know if it’s a sixth sense, or intuition, but we just decided to roll it out in all our stores in one day! As an entrepreneur, if you can’t take risks you might as well just quit.”

Muchemi adds being able to identify opportunities where others don’t is critical in entrepreneurship.

“Someone was challenging me the other day asking why was I building a hotel at a time people are closing hotels because of insecurity? But that doesn’t give me fear because it is a temporary thing. It is not the first time I have started a business during, or after, a crisis.”

In 2008, at the height of ethnic violence in Kenya, Muchemi bought two telecom companies and set shop in the Rift Valley. At the time members of her Kikuyu ethnic community were being attacked in the region and many were fleeing. “I opened in the places where a Kikuyu was not expected to be, and because of that I could get shops easily.

“Landlords were not asking for goodwill, they were inviting me. As people were closing, I was opening. If I wanted to open there today I wouldn’t get the opportunity because everyone is there and it is again ‘business as usual’. If you look closely, you will see opportunities in the midst of crises and challenges.”

Muchemi believes in starting small, taking ‘baby steps’ and staying focused on the vision. She notes that managing several businesses is not too hard as long as one sticks to the key fundamentals of being an entrepreneur. Having the spirit of competitiveness, working hard and learning “the tricks… not in school, but on the ground” are some of the fundamentals.

“I have come to the conclusion that an entrepreneur can almost do anything. I think all businesses are the same in how you handle them as an entrepreneur. An entrepreneur is beyond a manager so you have to get managers to manage your business as you do the entrepreneurship. You have to carry the vision of all the companies and network… but to do balance sheets? I am sorry, somebody else should do that.”

Muchemi describes herself as a go-getter who doesn’t believe in giving up. Being aware of the responsibility she has to her more than 500 employees and her relationships with banks, customers and partners such as Safaricom, motivates her. “I feel like I am just a steward and can’t afford to let down anybody,” she says. “When I start something I never have a plan B because I give myself, my energy, my thoughts and everything into making it a success. So I cannot entertain the thought of failure.

“Yes, at some point reality check might hit me but that is a secondary thing. I believe that whatever I touch, as long as I am focused, consistent and resilient, at some point there will be a breakthrough.”

Although being a woman entrepreneur in a male dominated industry can be challenging, she never entertains the thought that she is “less capable” because of her gender. Women possess skills that can be vital in business but often taken for granted, such as multi-tasking.

“Women should make these skills work for them. For instance, we should not be apologetic about soft skills because they are advantageous to the business. And intuition is also vital, because sometimes business is not about logic.”