Kenyan entrepreneur Alex Nyaga was only 21 when awarded a multi-million shillings contract to provide professional cleaning services for Nairobi’s Jomo Kenyatta International Airport (JKIA). The following year he bagged another big client, the US Embassy in Nairobi, which was then reducing its foreign staff in the aftermath of the 1998 bombings. 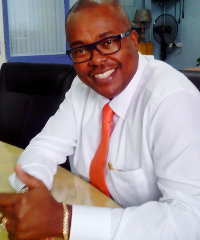 Today Nyaga is an accomplished entrepreneur running one of the leading professional cleaning and allied services companies in Kenya. He is the founder and CEO of Parapet Group that encompasses the Parapet Cleaning Services company and Parapet Hospitality and Business Institute. He has been feted as one of Kenya’s ‘Top 40 Under 40’ business leaders.

He stumbled into professional cleaning shortly after returning to Kenya in 1997. He had studied for two degrees in the US and Europe, and had a well-paying job in Switzerland, but quit to return home hoping to tap into opportunities in a booming hospitality industry. “I knew there was a great opportunity in that field and wanted to add an international outlook to the local market,” recalls Nyaga.

Industry on its knees

But by the time he arrived the industry was on its knees. The outbreak of ethnic clashes at the Kenyan coast led to hotel cancellations, tourist numbers dropped and eventually some hotels closed. There were simply no jobs in the industry.

But as a graduate in hotel management he had expertise in related fields such as housekeeping. And he had also acquired some experience in the field, including working at an airport in Geneva. So he started Parapet Cleaning Services, but for six months no business was forthcoming.

So when he saw an advert in a local paper looking for a company to provide services to an “Airport in Africa”, Nyaga responded. The airport turned out to be JKIA, and with that came Nyaga’s first deal.

A young man in the boardroom

Although he got into “awkward situations” because of his young age, such as being often asked ‘where is your boss’, Nyaga says clients appreciated the fact that Parapet Cleaning Services was providing “a certain quality that was lacking” in the market.

“They wanted a professional job done by professionals,” says Nyaga. “Of course initially age was an issue. I always got myself into very awkward situations. But the company had something to offer and it had a team of young dynamic people. We were also demystifying cleaning… by bringing in sophisticated equipment, training personnel, and displaying an understanding of the chemicals used on the job.”

For the last 17 years Nyaga has built Parapet Cleaning Services into a leading player offering cleaning solutions for both domestic and commercial customers. Its clients include airports, hospitals, shopping malls, office buildings, hotels and private residences. The company employs more than 3,500 people in Kenya and Uganda.

Despite landing big contracts early on in the business, Nyaga says he did not allow that success to distract him. His focus was firmly trained on growing the Parapet brand and maximising the potential in the industry. From the very start Parapet Cleaning Services had a board of directors and management team with clear performance targets.

“It brought that discipline of good corporate governance. I think having structures in the business from very early on is one of the things that really kept me grounded. I was also aggressively exploring the opportunity for the growth of housekeeping. I could see there was huge potential, and I did not have time to sit back and relax.”

In the last four years he says demand for professional cleaning services has risen due to the boom in commercial real estate. Other factors include the rise of labour costs, and the difficulties around managing talent that is prompting companies to outsource services while focusing on their core business.

“We have invested a lot in the structure of the business and in training of staff. Now we have a good motivated and empowered team that drives the business,” notes Nyaga

Employees are also expected to work outside of the normal eight-to-five hours. And getting people who are passionate and have the right attitude to what he describes as a “thankless job” is not easy.

“We are a company that runs 24 hours a day. We have sites that never close such as airports, hospitals, hotels and shopping malls. We need people who have the right attitude and passion,” adds Nyaga. “Anyone can get into this job because it pays, but not because they love gardening or housekeeping.

“I think that is a wrong approach, because this is a very giving, very selfless and a thankless job. Yet it is critical and essential in how we live our day-to-day lives.”