Cameroon’s Arthur Zang is the 26-year-old inventor of the Cardio Pad, believed to be Africa’s first medical tablet. The device allows healthcare workers in rural areas to perform cardiac tests and send results to specialists via mobile phone connection. 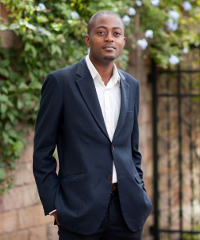 At the moment, two of Zang’s Cardio Pads are being tested by healthcare workers in Mbankomo, a small village 25kms outside of Cameroon’s capital city Yaoundé.

In an interview with How we made it in Africa, Zang explained the inspiration behind his invention.

“In Cameroon we have less than 50 cardiologists for more than 20m people, and all these cardiologists are located in the big hospitals which are in the city. So all the patients [outside Yaoundé and Douala] have to travel into the city each time they [need] an examination,” said Zang, explaining that this can be expensive and time-consuming for lower-income patients and make follow-ups difficult.

“So it is a very big challenge to solve this problem; to try and give all people the same attention.”

Zang’s patented Cardio Pad, which comes with a complete diagnostic kit, aims to solve this problem by allowing cardiac examinations to take place in rural locations by health workers who are not necessarily cardiac specialists.

A wireless set of four electrodes and a sensor are attached to the patient and transmits signals via Bluetooth to the Cardio Pad, taking a digitised electrocardiogram (ECG) reading of the patient’s heart function. The healthcare worker can then transmit this information to a national data centre, where cardiologists in urban centres can receive the ECG, make a diagnosis, and send it back to healthcare worker, along with prescription instructions. All of this can be done without the specialist ever actually seeing the patient directly.

According to Zang, his Cardio Pad and complete diagnostic kit can cost as little as US$1,000 to manufacture if the electronic components are available. “Sometimes it can be more… Electronic components designed for the medical field are really very expensive.”

Once manufactured, Zang expects that his company, Himore Medical, can sell the complete kit in the African market for between $3,000 to $3,500 – similar, yet less portable systems currently cost more than double this. “Compared to all the other devices that perform the same work, the Cardio Pad is very, very low cost,” he noted.

At the moment, the electronic components have to be manufactured in China, and then assembled in Cameroon, but Zang hopes that local manufacturing will be possible in the future. 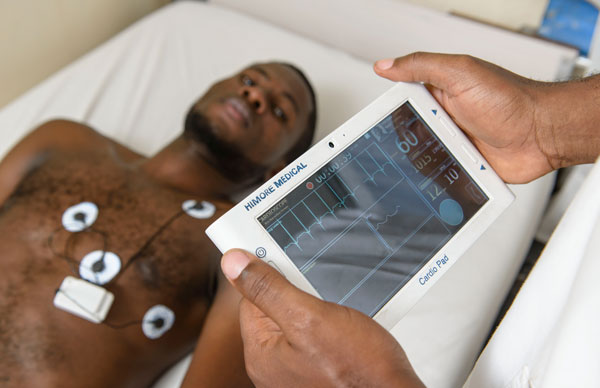 The internet: an entrepreneur’s best resource

Zang completed his bachelor’s degree in computer science from the University of Yaoundé in 2007, and two years later did a master’s at the National Advanced School of Engineering of Yaoundé. In 2009, Zang (who was looking to apply his knowledge in developing medical solutions) met a cardiologist who outlined the challenge of addressing the needs of rural patients requiring cardiac examinations.

Zang decided to invent a portable medical solution, but needed to first gain the medical electronic know-how, which he did via the internet.

“In my country we do not have a lot of engineering schools where you can learn medical electronics or bio-medical engineering. So when I wanted to design the Cardio Pad, I decided to teach myself medical electronics online. This is how I learnt electronics, learning for six months… After this I was able to design an electronic device. It was a very big challenge to learn the technology, and the internet is a very good tool to learn.”

Finding financing to build his prototype also proved to be a major obstacle, with banks unwilling to loan money to a student without guarantees. However, Zang’s mother was able to get a $1,300 loan from a bank which financed the production of his first prototype. Armed with this, he then used social media like Facebook to find further funding.

“With that prototype I made a video demonstration and the president of the country gave me $30,000 and this allowed me to manufacture the first 20 devices,” he said. “And after the manufacturing of the first 20 devices I made the second video demonstration… and I submitted it to the Rolex Awards for Enterprise, an international contest of innovation.”

This year, Zang won the award in the Applied Technology category, and was selected as one of Rolex’s 2014 five Young Laureates across the globe. In addition, Zang has been awarded 50,000 Swiss francs ($55,677), which will help him produce 100 medical tablets, 10 for each of Cameroon’s provinces.

Furthermore, Zang’s company is looking to produce other kinds of medical devices, like ultrasound equipment that can assist medical examinations in poverty-stricken locations and hospitals.

Zang’s advice to other aspiring entrepreneurs in Africa is to make use of available tools such as the internet, and to not be conventional in their thinking and approach to solving African problems.