The Gulf region is actively working to strengthen its business relationship with Africa. 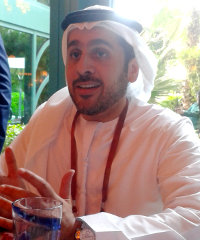 The Dubai Chamber, the emirate’s business promotion agency, is this week hosting a number of African government and business leaders for the Africa Global Business Forum, held at the opulent Atlantis hotel. Coincidentally, or maybe not, South African hospitality tycoon Sol Kerzner was one of the developers of the hotel.

The Dubai Chamber plans to boost the presence of Gulf companies in Africa, while at the same time position Dubai has a gateway for investment into the continent.

“We can see many opportunities of co-operation and partnership happening between this region and Africa,” says Essa Ali AlZaabi, a senior vice president at the Dubai Chamber.

The Chamber has already established an office in Ethiopia, with additional branches planned for Ghana and Mozambique.

AlZaabi adds the region wants to export its expertise in areas such as infrastructure and tourism to Africa.