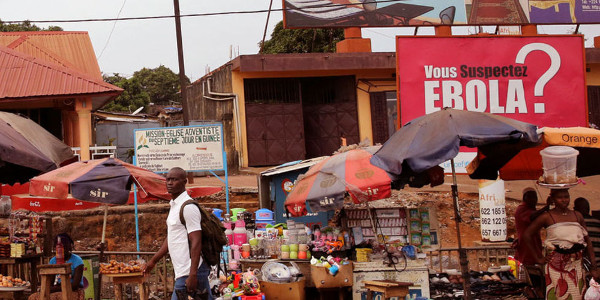 Make no mistake: Guinea is still one of the poorest countries in the world. Photo: World Bank/Dominic Chavez

On November 17th, a gathering organised by international development and financial institutions in Paris concluded with a sweeping announcement of an additional US$21bn to finance Guinea’s national plan.

This was barely one month after an almost similar amount was agreed between China and Guinea, part of a strategic investment package Presidents Xi Jinping and Alpha Conde negotiated. For a country with a GDP of about $6.2bn, this is remarkable. The news coming from a country that had its growth reduced to zero by the Ebola cataclysm just few years back, is definitely changing fast.

Make no mistake: Guinea is still one of the poorest countries in the world. But its recent efforts to promote economic growth by boosting output in the mining and agriculture sectors, and by encouraging good economic governance make it a poster example of an African country pushing against all odds to succeed. Such developments are often ignored by the mainstream players. As the saying goes, ‘The pyramids in Egypt were not built in a day’. Guinea is quietly transforming its economic structure after the ravages of bad governance destroyed its potential to be a star performer. The country was punished for wanting to be independent, certainly, but also neglected for its lack of vision and seriousness.

Boké is Guinea’s main mining town. Recent unrest in the area brought to light the fact that despite its vast natural resources, the population of Boké has yet to see mineral wealth translate into tangible development. The way mining has been managed inhibits the ability of residents to benefit from it. A local resident expressed his frustration by saying, “I was sad at first and then angry. There are big mining companies here, yet no one who is a native to Boké can get a job. Even the Guineans getting jobs come from outside Boké.”

To address youth’s concerns, a new project was launched to target approximately 30% of the Boké labour force that is currently involved in job searching, entrepreneurship, or SME ownership. The programme will match the demand and supply chains for labour in the mining industry, by providing job readiness and micro-enterprise support, an ecosystem for growth for established SMEs, and ongoing job support for participants. Aside from direct outreach, the project will work with community groups, employers, and the media to source participants. With a total labour force of up to 410,000, the services of the new initiative could potentially serve 30% of the total labour market, or almost 125,000 beneficiaries.

Guineans have also expressed frustration about the agriculture sector, particularly when it comes to exporting pineapples. Guinea was a leading exporter of pineapples to Europe until the 1970s. The country was recognised for the quality and variety of its pineapples, including the Cayenne Lisse, Baroness of Rothschild and Queen Victoria. Guinea has been absent from major fresh pineapple consumer markets since. But the Ministry of Agriculture and main private actors in the sector have now set a target of hundreds of tonnes of fresh pineapple exports targeting international markets by the end of January, 2018. To achieve this objective and to remove key bottlenecks in the value chain, a partnership was signed between the government, pineapple producers in the Basse Guinée region and French importer VB International.

These are examples of changes touching people’s lives. Getting uninterrupted electricity in Conakry and major towns finally gave credence to the Guinean saying that the country is ‘West Africa’s waterfall’. Thanks to the new Kaleta dam, that change is tangible too. The Souapiti dam under construction will further decrease the power deficit and offer the country with the largest reserves of bauxite and the best iron ore deposits in the world – a chance to start industrialising through commodities value addition. Obviously this has never happened partly because the infrastructures needed were never prioritised.

In recent years, Guinea has made many developmental strides with regards to the three-most significant human development indicators: life expectancy at birth; expected years of schooling for school-age children and average years of schooling in the adult population; and income – measured by gross national income per capita. Progress in these indicators is encouraging. Since 1985, life expectancy at birth has improved by approximately 20%, from 50 to almost 60 years of age, and expected years of schooling has increased almost threefold in the same period, from less than three years to almost nine years.

With progress in macroeconomic indicators, sustainable sovereign debt included, the country is feeling the new business climate. Guineans have always been entrepreneurs by heart. Across Africa they are found amongst the successful and risk-takers. Time has come for Guineans to do the same at home.

Carlos Lopes is a professor at the Graduate School of Development Policy and Practice, University of Cape Town and visiting fellow at the Oxford Martin School, Oxford University.