The idea behind a pension plan is to provide people with an income during retirement, when they are no longer earning a steady income from employment. Only an estimated 7.5% of Africa’s working population currently contribute to a pension. Despite this relatively low penetration, there is reason to believe that the continent’s pension fund industry is set for a boom. 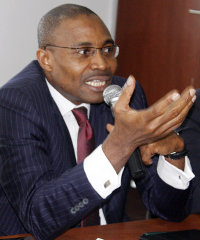 Dave Uduanu, chairman of the Pension Fund Operators Association of Nigeria, says that the industry only has about 1% of its portfolio allocated to private equity.

It is predicted that within three decades, Africa will have a larger working age population than China. According to Diana Noble, CEO of CDC – the UK’s development finance institution – this workforce will need pensions. “More workers are going to move from the informal sector – which we all know is very large – get formal jobs [and] contribute to pension plans,” she said during a panel discussion at last month’s African Venture Capital Association (AVCA) conference in Cape Town.

Noble added that African pension funds also have a demographic advantage over other regions. “If you look at Japan’s pension fund industry, the ratio of workers to pensioners is approaching 1:1. If you look at Zimbabwe, the ratio will not get below one pensioner to 10 workers for another 20 years.”

Noble reckons that Africa’s private equity industry will be a major beneficiary of the growth in pension funds.

When pension funds invest the contributions of employees, they normally spread the money across a variety of asset classes, including stock exchange-listed companies, bonds, properties and private equity.

Ord notes that other African pension fund regulators, driven partially by the small universe of listed investments, are starting to consider the benefits of private equity investments.

The Nigerian pension fund industry collectively has less than 1% of its assets invested in private equity, according to Dave Uduanu, chairman of the Pension Fund Operators Association of Nigeria, who also participated in the AVCA event.

The Eskom Pension and Provident Fund – the pension fund for South African electricity producer Eskom’s employees – only has around 2.5% invested in private equity.

Although it is not there yet, South Africa’s Government Employees Pension Fund (GEPF) – the continent’s largest pension scheme – has a long-term strategy to have anything between 10% and 20% of its portfolio allocated to unlisted investments, which includes private equity.

John Oliphant, principal officer and head of investment and actuarial at the GEPF, noted that unlisted investments have the potential to deliver superior returns. “If you look at what is happening in various asset classes, you start seeing that most of the asset classes are struggling to deliver real returns, let alone delivering returns in excess of inflation. Based on our strategy, we have identified unlisted investment as a very important pillar for generating excess returns for us going forward into the future.”

Uduanu said that because the Nigerian stock exchange and bond markets have historically delivered very high returns, it is tougher for pension funds to justify private equity investment.

Despite the fact that the pension fund industry in much of the continent is still in its infancy, Noble is confident that it is going to play an increasingly bigger role in supporting private equity. “The African private equity industry is going to go through an incredibly important transition. African pools of capital are increasingly going to become major funders. I don’t think the question is ‘if’. It is simply ‘when?’.”