“We all need treats, even when things are a bit tight,” says Wayne Gosling, CEO of Groupon South Africa. And it seems to be working. Groupon is sweeping through South Africa like the proverbial wild fire. They are currently offering deals in all the main cities, but also in places like Nelspruit and Stellenbosch. 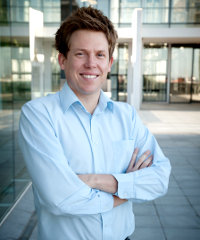 Gosling is echoing the reason for the success of Groupon that was started by Andrew Mason in Chicago in 2008 amidst the global recession. Groupon taps on the combination of people’s desire for a deal and to treat themselves, and this is even more evident during difficult financial times when people have less money to spend. Groupon’s first offer was a two-for-one-pizza deal at bar in Chicago that was bought by 24 people.

During a recent interview in Vanity Fair, Mason said that people spend the majority of their disposable income on “stuff that can’t be shipped in boxes” like eating out, recreational activities and personal care.

Gosling and Daniel Guasco, co-CEOs, started Twangoo in South Africa in 2009, which was a direct clone of Groupon in the US. They soon became the South African leader in collective online buying. When they needed money to sustain that position they got in touch with Andrew Mason and in January 2011 Groupon bought Twangoo. In the beginning of February 2011, Groupon SA was launched.

For the unenlightened, the Groupon concept is simple. Businesses agree to discount a product or service for anything between 50% and 90%. Customers subscribe to Groupon by providing an email address and the deal of the day is delivered to their inbox. Payment is made via credit card. Usually a minimum number of people have to buy the offer, ahead of the cut-off time, before the deal “tips” or is honoured and becomes redeemable. If the deal does not tip, your card is not charged and nobody gets the deal. Groupon and the business split the revenue from the deal 50-50.

For the consumer the advantages of buying on Groupon is the obvious value for money deal and treat-yourself combination, but it is also an incentive to move out of your comfort zone and experience your city and surrounds. A recent Cape Town offer was a typical out of the box experience of a Segway (personal transporter) tour of the Spier Wine Estate that included a wine tasting for R190 (US$28), a saving of 50%.

For a merchant the advantages are also multi-pronged. Apart from selling services, filling tables and empty rooms, it is a marketing tool. There is the argument that it is sometimes impossible for a merchant to discount a product or service and still split the revenue with Groupon. Gosling, however, argues that the service they provide vendors comes at a cost, but instead of paying for expensive newspaper or radio advertisements, Groupon is a much more cost effective option, with no upfront payment. It can be seen as free advertising, which would especially benefit smaller businesses. He also indicated that since they have a focus on building long term relationships they are prepared to negotiate with business partners who share the long term vision.

Apart from the love for a deal, many subscribers open the daily email to read the product write-up, which is quirky, bizarre and often preposterous. A Botox deal was described as “Isaac Newton discovered gravity not when cranially assaulted by a falling apple but upon noticing his sagging jowls while examining the forehead bruise in the mirror. Help reverse the Newtonian burden with today’s Groupon . . .” The write-up is usually followed by an afterthought which is completely off-kilter and absurd. After the write-up of a pizza deal the following was offered “Food for thought: In the remote villages of Italy, old pizzas are used as frisbees. When the children run out of amusing foods to throw at each other, they sit and stare at the bus station.”

The quirkiness stems from Groupon’s creator Andrew Mason, who is often labelled as idiosyncratic. He reportedly said about Groupon’s success, “As we get bigger, instead of being like most companies, conforming and becoming more normal, we want to become weirder.” In the Chicago office there is a “typical” teenagers bedroom, complete with unmade bed, sports equipment and empty Cheerios packets, called “Michaels Room” – the use of which is unclear. In the Vanity Fair article Mason posed with a cat (whether real or superimposed is unknown) on his head. Gosling emphasised that the quirky editorial voice will remain as it is part of the Groupon SA brand.

According to Gosling the majority of the Groupon SA database is female (65%), between the ages of 24 to 34 and that 95% is employed. This profile is mirrored by statistics in the US and UK, that also indicates that most consumers are single and have a post-matric education.

Groupon’s growth has been phenomenal. In the three years since 2008 it has grown into a multi-national corporation with 83 million subscribers in 43 countries and 7,000 employees. This success was appetizing enough for Google to offer $6 billion to take over Groupon. When Groupon declined this very lucrative offer, speculation ran rife. The New York Times at the time, for example, speculated that apart from the obvious reasons that Groupon wanted to stay independent, secure even more substantial investors, and become more prosperous, the company possibly would go public with a share offering. This materialised when in June 2011 Groupon has announced plans for an IPO it hopes will raise some $750 million.

Gosling says that for the South African business the most popular deal, in terms of numbers, was a nationwide offer at Sandwich Baron that was selling coupons for R5 ($0.75) for a chicken mayonnaise sandwich that normally costs R17 ($2.50). More than 16,000 coupons were sold. Their most lucrative deal, however, was recently when 915 customers paid R1,050 ($157) instead of R2,100 ($314) for a sunrise hot air ballooning experience that included breakfast, chocolate and champagne.

Whether Groupon is going to venture into the rest of Africa is uncertain. In Kenya, a similar concept is offered by Zetu. Gosling was unable to comment on African expansion due to Securities and Exchange Commission (SEC) regulations following the filing of Groupon’s IPO registration.