Where once stood overgrown bush and sisal plantations, now sits a luxury golf estate that is home to some of Kenya’s wealthiest. Five years ago a group of investors, led by Alastair Cavenagh, a businessman and one of Kenya’s prominent rally drivers, teamed together to build the 2,500-acre Vipingo Ridge golf development. 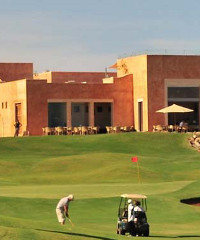 Located at the Kenyan coast near the city of Mombasa, the development features an 18-hole course, a game conservancy, sandy beaches, a private airstrip, numerous lakes, woodland areas and nature trails. So far 600 acres of the 2,500-acre project have been developed.

Vipingo Ridge CEO Robert Ward tells How we made it in Africa that transforming a sisal plantation into a five-star residential golf estate has been challenging.

Major tasks for the team included clearing bushes, moving trees and putting in infrastructure such as roads, power and water. They overcame several challenges by “doing things internally”. For instance the company acquired its own equipment such as bulldozers and trucks. It all helped reduce costs.

“We invested in all that early on so had the capability, in-house, to do almost all the work rather than rely on external contractors. When talking of a development of this size, if for example you hired a bulldozer from somebody, in a short while you’d be paying them more than buying it outright,” says Ward.

“Our overall development strategy has been to do it ourselves, and that makes sense because of the grand scale of everything. For example, it made sense to put up our own electrical reticulation system. While it was a big investment upfront it meant that we could control the process and time frame of putting in the power,” says Ward.

He explains that if they had relied on Kenya Power for electricity distribution, the development would have almost certainly been subject to a lot of delays. And Vipingo Ridge also developed its own water capacity by digging a network of boreholes.

When implementing such a big real estate project, Ward says speed is of the essence otherwise one risks spending lots of money on management and labour costs. “If you drag your feet, and don’t push forward, you risk running out of cash,” he warns.

“I hear about other developments where when they have site meetings they have 22 consultants advising on different aspects of the project. We would never do that. We don’t do it as a democracy. With a development like this you need a strong minded board of directors who have a clear vision and they pursue that vision without deviating.

“I think if you have too many consultants and advisors, your vision and direction gets blurred and your finances get drained by paying consultants.”

Ward notes that the ethos of the key shareholders and co-founders of Vipingo Ridge has been instrumental in the project’s success. Most are successful businessmen with interests in shipping, civic construction, oil distribution and golf course development.

According to Ward, seed capital running into hundreds of millions of shillings from Vipingo Ridge shareholders enabled the company to build core infrastructure, including the golf course.

“It made a big difference to the project because you can’t rely 100% on your property sales to drive the development. You have to spend quite a bit of money upfront. As far as the total cost of development, which has been about Ksh.3.3bn (US$37m), approximately 20% was seed capital. It is very important to have that seed capital to start things off and make significant progress.”

He warns that failure to put in infrastructure in the early days tends to kill the appetite of potential buyers.

To build a world class standard 18-hole golf course, he estimates requires a minimum of $3m.

“Then you need to be prepared to spend approximately $600,000 to $1m on golf course machinery. What people don’t realise is that when you are doing a golf estate you need lots of water. A golf course can use up to two million litres a day. You need to have a clear plan for water.”

He compares building a residential golf estate to “developing a small town”.

Ward describes the shareholders as a group of visionary friends, all successful in business, daring to go where others would fear to.

“They are people who dream up something and they achieve it. They are risk takers, and are very successful risk takers. They love the Kenyan coast, they have all worked in this region. This is their home as well as their investment.”