Nigerians are a nation of entrepreneurs; while the Kenyan capital of Nairobi has established itself as a technology hub. 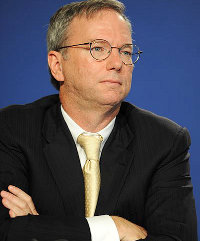 So wrote Eric Schmidt, executive chairman of Google, in a post on Google+, after spending a week in sub-Saharan Africa.

“Nigeria, known as a land of oil corruption and the ubiquitous 419 email scams, is the biggest surprise to a first time visitor. Nigerians are entrepreneurial, stylish, educated, and have the belief that their country can emerge as the next Brazil,” wrote Schmidt. “With 170 million citizens, and a record breaking 11 years of civilian elected government, the compound growth and the shared memory of real internal conflict almost guarantee their short term success. Future growth of Nigeria should help with its international image problem, as the real story of its success gets out.”

Schmidt was even more upbeat about Nairobi’s prospects of becoming the Silicon Valley of Africa. “Nairobi has emerged as a serious tech hub and may become the African leader.”

He attributed a rise in foreign investment into Kenya to the country’s “relatively stable politics, the British legal system, and a benign climate”.

According to Bloomberg, Schmidt visited Nairobi’s iHub, a co-working space for tech entrepreneurs, and was impressed with a number of local startups, including Kopo Kopo (a platform that allows SMEs to accept mobile payments), SafariDesk (a vacation planning service) and eLimu (a company producing tablets for primary school students).

Paul Hunkin, one of the co-founders of SafariDesk, tweeted: “Just met @ericschmidt at @iHub — his reaction to @safaridesk was ‘hey, you should be able to make a lot of money off that’.”

The Google chairman also visited Rwanda, and compared the small East African country to Singapore. “Rwanda is a jewel with a terrible past. High economic growth and the development of a significant middle class are threatened by the withdrawal of aid due to UN complaints over the Congo.”

Despite the general positive tone of his note, Schmidt, however, also commented on the various hurdles still facing the continent, including a lack of reliable electricity, corruption, and security concerns.

He said that the internet will play an important role in addressing many of these challenges. “Connectivity is much more important for security than many analysts think. Societies who are not connected lack opposing viewpoints and are much more subject to easy radicalisation. The virtue of having more connectivity is that people will have more choices, and more choices lead [to] a better understanding of the value to go to school, the need to treat women equally, the choice to not demonise others, etc.”

Mobile – the future of African internet

Schmidt said that due to the large penetration of mobile phones on the continent, this will be the primary means of how most people will access the internet. “Many Africans will be last, unfortunately, to be connected to the rest of us. For them, the best short term outcome will be feature phones (inexpensive voice and SMS phones).”

He noted that some African countries are taking their time to licence 3G and 4G networks, describing it as “a costly delay for countries that have little residential broadband”.

In 2001, Schmidt was recruited by Google founders Larry Page and Sergey Brin to run their company as CEO. Although he stepped down from the CEO position in 2011, he continues as executive chairman where he is responsible for the external matters of Google: building partnerships and broader business relationships, government outreach and technology thought leadership, as well as advising the CEO and senior leadership on business and policy issues.

He concluded by saying: “The demographic dividend in Africa of young people is their greatest hope, in my opinion. Today high rates of unemployment show an economy underperforming to its true potential. This new generation expects more, and will use mobile computing to get it. Optimism is appropriate for Africa, as the people we met will do much more with less than we can imagine, and the devices and systems built in the first world will be used in the most creative ways in the emerging new world of Africa.”