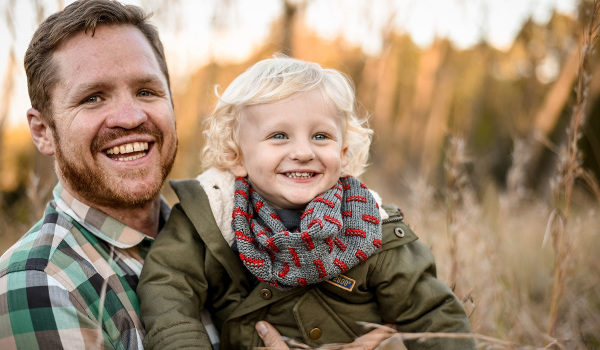 Designing a “flat, half-an-egg-shaped” rugby ball to “turn the South African rugby industry on its head”, earned a dad from Pretoria the title of South Africa’s “most legendary dad” – at the very least in the eyes of his family and Whistler African Style Rum.

“We are so happy that our dad and husband is recognised for being the legend he is,” says winning dad Gary Crookes’ wife, Maude.

She entered her husband, a marketer from Pretoria, into Whistler African Style Rum’s “Dad, You’re a Legend” campaign on behalf of the couple’s son Carter, who is only two years and nine months old.

The entry, with the spirited motivation, “My dad decided rugby players needed a flat, half-an-egg-shaped rugby ball to practice and improve their passing and catching skills. He developed a whole programme with it. This English-speaking, ‘ginger-head’ marketer has taken on, and shook up the SA rugby scene. He whistles his own tune and is not scared to do so,” ended up being the winning one.

The nationwide Father’s Day campaign, which ran through June, aimed to find the one dad in South Africa that most personifies the saying “Whistle your own tune”.

Motivated by their own dads who do things a little differently, just like them, Whistler rum founders Trevor Bruns, Leon Bruns and Stephan De Vos were looking for a unique way to honour dads who aren’t afraid to “swim upstream”.

According to Bruns, Crookes – who invented the ShadowBall which is currently being used in the Nashua Rugby Skills Project –was the stand-out entry.

“He changed the existing rugby industry. Anyone else would think he is crazy, but he did it and it works,” says Bruns.

To enter, participants had to visit whistlerrum.co.za and motivate why they think their dad is the most legendary one in South Africa.

Not only does Crookes now have the title of the country’s most legendary dad, but he also has a case of rum to toast his victory.