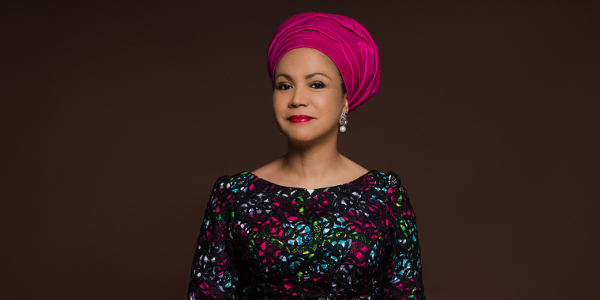 “Whatever thy hand findeth, do with all thy might.” This was the advice that Adenike Ogunlesi’s mother would repeatedly give her as a child.

“And my mother’s voice still echoes in my head today.”

Ogunlesi is the entrepreneur behind Nigerian children’s clothing manufacturer and retailer, Ruff ‘n’ Tumble. The brand has 15 stores across five cities in the country and has another opening before the end of the year. There are further plans to open an additional 28 stores between 2016 and 2018.

It all started during the rainy season in 1996 when Ogunlesi decided to make her three small children pyjamas. They were cotton, colourful, and trimmed with lace with a Peter Pan collar. There was nothing like them in the market.

They caught the attention of her sister-in-law who ordered seven pairs. And this planted the thought in Ogunlesi’s mind: maybe other mothers would be willing to pay for them as well.

She began selling them out of the boot of her car after dropping her children at school. When they sold, her husband suggested she make other clothing for children too. “So I took all my kids clothes apart to see how they were made, developed patterns out of some of them, and just started making trousers, shorts, shirts and skirts, and all kinds of things.”

It wasn’t long before she was selling them at church bazaars and school markets. And the day she realised she had a business was when she took 120,000 naira (about US$600) worth of clothing to a market and sold almost all of it.

“I just closed my eyes to everything else and thought: ‘Okay, what exactly is going on here? There must be other people with this need’,” she recalled.

“So I did a market survey, although I didn’t realise it at the time. I looked around at what was in the market, and found [children’s clothing] was very restricted. The colours were very bland and it wasn’t very creative or attractive. I wrote a list of what I felt other companies were doing right and wrong, and from there I would draw my own competitive advantage.”

For example, one of the mistakes she felt other retailers and brands were making in Nigeria was selling three-piece outfits, without the option to mix and match.

“So I thought if all they want is a shirt, they should buy the shirt and be able to mix it with the shorts or trousers of their choice – just to be free to create a style for their kids, the way they would like their kids to be dressed. I think this was what we were offering,” she explained.

She hired some tailors and started producing for a supermarket, where she was given her own corner to sell her clothes. But every time she visited it she felt disappointed.

“People had tried on the clothes, and then they were just dropped on the floor. The whole thing was just a mess. And I thought this does not represent ‘whatever thy hand findeth, do with all thy might’. My mother would be upset if she saw this. The standards were very low.”

“I can’t remember where I was when somebody told me he was converting an old building into tiny little stores, but I said, ‘Okay, I am coming to take one. I am going to brave it. I am going to open a store.’”

Using personal savings and money borrowed from her older brother, Ogunlesi opened her first store in Lagos in 1998. And after having a long queue outside her shop one Christmas, she rented out the adjacent space next door and expanded her shop.

At the time her husband was studying towards an MBA and she started reading his textbooks, and eventually attended a short course with a focus on customer experience and supply chain management.

“One day the lecturer asked the class if they are going to be that small business that remains the same 30 years later… And I just thought: ‘Never! That can’t happen to me, not in a million years.’”

While returning from lectures that day she came across a retail space for lease. She rented it, and opened her second store.

“That’s where we introduced computerisation and started using an enterprise resource planning (ERP) system. We put in place all the customer engagement [strategies], such as getting customer data, sending them text messages, thanking them when they shop, and calling them when we haven’t seen them for a while,” she highlighted.

It wasn’t long before she opened a third outlet in Lagos, then expanded to Abuja, followed by Port Harcourt, Ibadan and Kano. Today Ruff ‘n’ Tumble has become a recognisable brand for “aspirational” and “professional” Nigerian parents, and employs over 200 people. 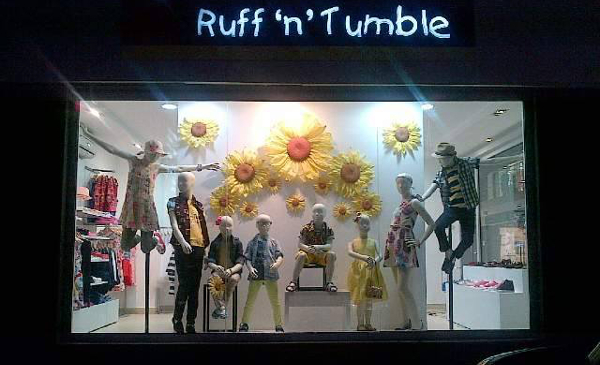 Ogunlesi said her brand has also developed a reputation for supplying durable, quality clothing that can be passed down to the next child. “As a mother, durability is key. I didn’t want clothes that after two or three washes are finished.”

Ogunlesi wanted to be a “present mother” in her children’s life, and admits that this meant slowing down the growth of her company.

“But I am glad and thankful for those years,” she emphasised. “Now my youngest child is going to finish university next year, and about four years ago I just decided that they are old enough now and I can do what I want to. It is a privilege. It is a good place to be as a mother.”

Over the next two years Ogunlesi plans to bring her number of stores in the country to over 40. “It is a huge thing to take on, but we are talking to some investors and we are hoping that it is going to happen. It is very exciting times for us.”

The business is also opening an e-commerce store, which she hopes will be ready by the end of the year.

Competition in the children’s clothing market has also become more competitive in Nigeria over the years, alongside the entrance of a number of clothing brands. Ogunlesi said she has recently commissioned some market research to see how the brand can improve its competitiveness.

“Nigeria has a very aspirational society, and people want to look and feel good. So we have to make sure our marketing is very emotive and very engaging.”

To compete with larger brands and stores, Ogunlesi is also training her sales assistants in professional styling, to add to the customer experience. And in Kano she is adapting the business model to better suit customer needs, where she has discovered many women would prefer to have sales reps visit them in the home, than shop in the mall.

‘Create your own universe’

Ogunlesi was initially supposed to become a lawyer. But after two weeks in law school she realised it was not for her and dropped out. “It was the most boring thing I had ever done in my entire life.”

Entrepreneurship, on the other hand, provided her with the “freedom to create your own universe” and “the power of choices”.

She advises other aspiring entrepreneurs to continue their learning by reading any business or management book they can get their hands on, and to draw up vision boards to help them see where they want to be in the next three to 10 years. “Because the choices you make will come from the direction of your thoughts and that’s what will become your reality. So it is very powerful,” she explained.

“And when you think you have made a mistake… take the learnings from it, dust yourself off and move on. Don’t stay in that place, just move on. But if you hold onto your vision and what it is you want to create, the universe will align. It always does.”