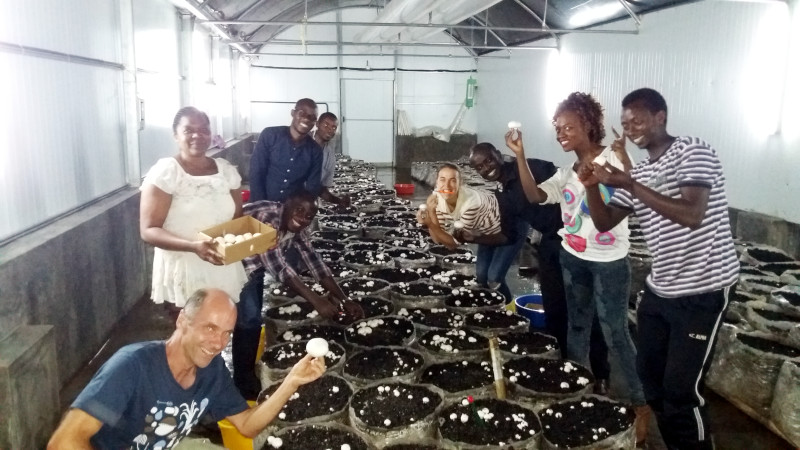 Laurent Demuynck (bottom left) celebrates a harvest with the team.

A little over a decade ago, Stanford Business School graduate Laurent Demuynck was running a microbrewery in upstate New York. Today, the entrepreneur – originally from Belgium – commutes between Barcelona where his family has settled and Musanze in northern Rwanda where his company, Kigali Farms, grows mushrooms.

The impetus for the drastic change was an inconvenient truth. “I’ve always been concerned about the environment and wanted to protect it. Then, in 2006, Al Gore’s The Inconvenient Truth triggered the need for a change in me,” he recalls. “Initially, the idea was to turn the brewery green but as I was a minority shareholder, this wasn’t possible.”

There was no clear business idea; Demuynck just knew he wanted to do something sustainable with a social impact somewhere in Africa.

The ‘what’ and the ‘where’ were still unclear. “I had heard good things about Rwanda; that it is super-clean, well organised and well structured,” he says.

In August of 2009, he first set foot in the country. Immediately, the question of the where was solved.

While the family was getting settled in Barcelona, Demuynck had time to do a lot of reading. Deciding on mushroom cultivation was thanks to a footnote in a book about circular farming that piqued his interest.

“I read that fungi could grow in brewery waste, naturally interesting to me; and then I read that it could also grow in coffee pulp. I immediately thought: ‘Well, Rwanda has coffee!’”

Demuynck had Paul Stamet’s book Mycelium Running: How Mushrooms Can Help Save the World on his shelf but had never read it. “My first reaction was that it was just an American over-exaggeration or some hype but two pages in, I was completely hooked. Fungi is unbelievable. Mushrooms, like humans and animals, digest pre-existing organic matter. It just so happens that the organic matter which mushrooms digest is the stuff nobody wants; like lignin or agricultural waste that is a little woody. This is agricultural residue and something Rwanda has a lot of.” 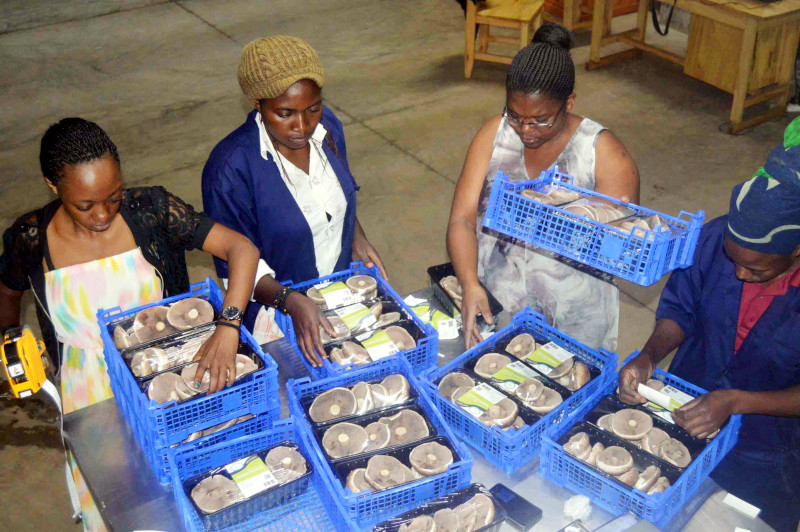 As Demuynck could not be in Rwanda permanently, he convinced his niece to move to Kigali to get the business started in April 2010. In September of that year, Kigali Farms was incorporated. He was adamant the company had to start small and grow gradually to manage its burn rate through available start-up capital. “My philosophy was to start small and make small mistakes. I was in a country I did not know, a continent I did not know, trying to grow a product I did not know. We didn’t hire any employees until June 2011,” he reveals.

Initial back-of-an-envelope market studies showed that while oyster mushroom cultivation was already prevalent in the country, there was still room to enter as a producer. Most of the existing producers were backyard growers – who were encouraged and assisted by non-profits that saw oyster mushrooms as an answer to poor nutrition and lack of income – but were short of the economies of scale to commercialise the product properly.

Kigali Farms began producing substrate tubes for the growers, adding a 100% buy-back guarantee to take the product off the growers’ hands, planning to sell this to the hospitality industry. “That didn’t really work. I had very little capital and we did not even have a fridge,” says Demuynck. “We threw a lot of mushrooms away. It was also difficult to get the farmers to follow a supply discipline. No matter how hard I tried, they could not give us notice of how much product would be supplied. Sometimes we had nothing, sometimes we had a lot.”

For several years, Kigali Farms’ payroll was higher than its revenue. Demuynck realised a strategy change was necessary.

That’s when he decided to expand the product range to include button mushrooms and recruited a consultant from South Africa to assist.

Button mushrooms account for approximately 99% of the market in the US and Europe but nobody was cultivating them in Rwanda. “Up till that point, I was using my own money and funds from the odd social enterprise grant. As a modern mushroom farm operation, we needed funding. That is when, in 2014, I had my first big shock when I approached the banks,” he says. 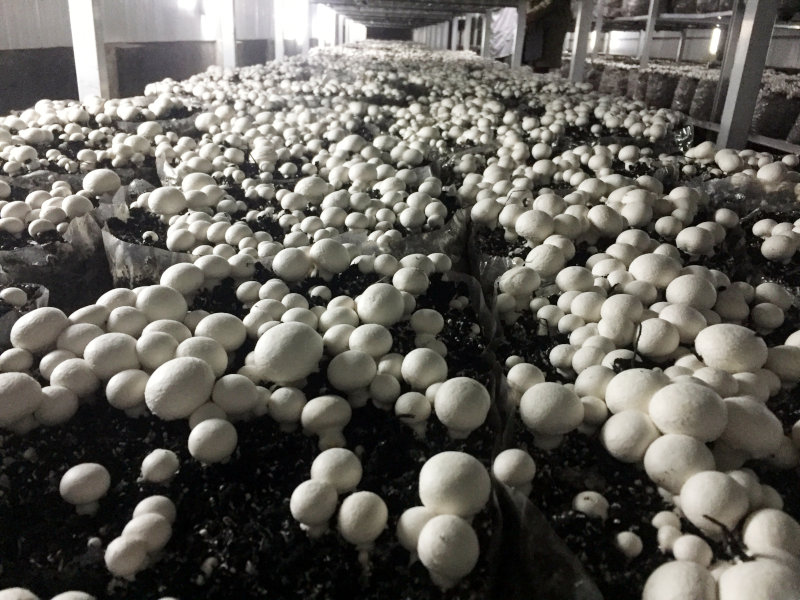 Demuynck expected a favourable response from the banks. It was not and he was close to giving up. He then presented at an investor conference in Nairobi and was finally met with enthusiasm from a German development agency. “The enthusiasm and the €200,000 funding received was fantastic.” That initial investment made it easier to once again approach the banks and Kigali Farms received two more loans to establish the mushroom farm.

The farm in the north of the country can produce five tonnes of mushrooms a week and had 120 employees pre-Covid. It was exporting to Kenya by road, and to South Sudan, Tanzania and Uganda by air. Kenyan exports have resumed and Demuynck hopes they can soon restart exports by air.

The company cultivates button, cremini, portobello, oyster and shiitake mushrooms. It still also produces substrate tubes for growing oyster mushrooms and sells the compost byproduct. “About 80% of our revenue comes from button mushrooms; although, in the coming year, we should quintuple our substrate tube sales and then the ratio will be closer to 65:35,” explains Demuynck.

For 2021, he wants to focus on marketing within the borders of Rwanda, something he admits the company has not done a lot of. Kigali Farms will also invest in some refrigerated containers for road freight to have more control over the cold-chain logistics process.

“Covid has shown that long supply chains are easily broken and we have to pay attention to the local market,” he says.

“I gave up my salary and everything to do this. The ideal outcome would be if this idea can be reproduced, by anyone, and if the 0.25% that Africa currently contributes to the mushroom production of the world can be pushed to 3%. It has all the right elements: growing cities and a growing middle-class. Mushrooms really are a great product for this market.”