Technology directly contributes around 7% to Africa’s GDP, which is higher than the global average. According to a recent report by the World Bank and the African Development Bank, the reason for this is because in Africa, mobile phones give people access to services that are available in traditional forms in the developed world, such as financial services, newspapers, games and entertainment. 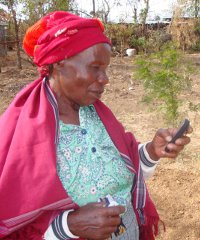 “So the value of a mobile phone is higher in Africa than elsewhere,” notes the report.

The one area where information and communication technologies (ICTs) can have the greatest impact in Africa is in the agricultural industry, the largest economic sector in most countries on the continent.

The report has identified a number of ways how technology can benefit African farming. Here are four of them:

One of the largest challenges traditionally experienced by Africa’s smallholder farmers has been a lack of transparent information about the market prices of crops.

One service that gives farmers access to market prices via their mobile phones is called Esoko, developed by Ghana-based BusyLab. Esoko also allows farmers to place buy/sell orders. The service is available in a number of countries across the continent.

“Our goal is simply to put more money into the hands of smallholder farmers, and try to address the information asymmetry that exists where farmers are frequently disadvantaged price-takers, often selling at a loss. After receiving better information, income improvements for farmers are estimated to be between 10-30%,” says the company.

Crop insurance has long been used in developed countries to address uncertain weather conditions. Agricultural insurance has, however, traditionally not been available to most smallholders in Africa.

One example of how ICT is being used to provide better access to crop insurance for smallholders is the Kilimo Salama project in Kenya. Kilimo Salama, Swahili for ‘safe agriculture’, enables smallholders to insure their agricultural inputs against adverse weather conditions, such as drought or too much rain. Farmers can insure as little as one kilogramme of maize, seed or fertiliser. To be covered under the scheme, farmers only need to pay a small amount extra on top of the price for a bag of seed, fertiliser or other inputs.

Mobile technology plays a central role in the scheme as it is used both for registration of new policies as well as for payouts. Kilimo Salama is distributed mostly through agro dealers that have been equipped with a camera phone that scans a special bar code at the time of purchase, which immediately registers the policy with UAP Insurance over Safaricom’s mobile data network. This innovative application then sends a SMS message confirming the insurance policy to the farmer’s handset. Payouts are determined by automated weather stations that monitor the rainfall. Based on the stations’ measurements and a predefined formula of crop rainfall needs, payouts are automatically made to farmers using Safaricom’s mobile money transfer service M-PESA. Farmers don’t have to fill out any claim forms.

It is expected that products like Kilimo Salama will increase productivity since only about half of Kenyan farmers invest in improved seeds and soil inputs. A key reason for the low demand is the fear among farmers that poor conditions, such as drought, will render their investment worthless, robbing them of both their crops and their savings.

Using good irrigation techniques can increase the efficiency and profitability of crop production as much as hundredfold. The use of ICT could have a positive effect on irrigation efficiency. “Efficient irrigation practices provide a consistent moisture supply to crops, water deficiencies can be overcome during periods of drought, more than one crop cycle per year can be achieved and the effective use of all production resources can be improved dramatically. The pressure on the diminishing water resources can also be alleviated and, as a result, more land can be put under irrigation,” notes the report.

Two projects from Egypt have been highlighted as examples of the successful use of ICT to improve irrigation. The first one is the government-backed Integrated Water Resource Management Action Plan, which is being implemented on more than 2,000 km2 of the Nile Delta. The project aims to improve irrigation and drainage, and increase the efficiency of irrigated agricultural water use and services. The report says that the first phase of the project has led to crop yield increases of 20%.

The second example is the Magrabi Farms area that has been developed from actual desert to the 8,500 acres that are now fully irrigated. The area exports produce to 38 countries. The whole complex has a fully-integrated irrigation system managed by an irrigation engineer.

The report notes that the capital and operational costs involved in the roll-out of ICT-based irrigation systems are often low compared to the expected benefits.

These days there is a growing emphasis on the traceability of agricultural production. Developed countries increasingly demand that food is tracked from its origin along the entire value chain – from the farm all the way to the supermarket.

One successful example of how ICT has been implemented to boost traceability is the Namibian Livestock Identification and Traceability System, which according to the report, unlocked wealth along the entire livestock value chain. Animal identification is done through both radio frequency identification (RFID) for automated data input, and a visual plastic ear tag that supports production in more rural areas.

Another successful programme that has been introduced in Africa is a mango traceability system linking smallholders and exporters in Mali to global consumers.