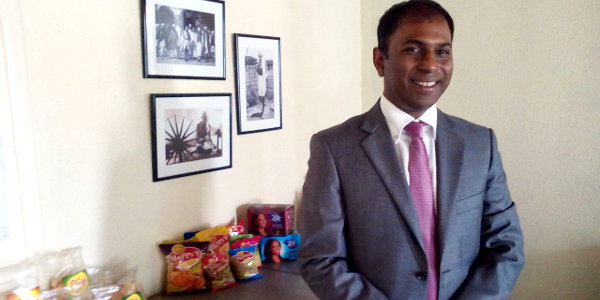 In every other household in Kenya’s capital Nairobi, be it in a wealthy suburb or an informal settlement, one is bound to find a water storage tank. Most schools, hospitals, factories and commercial buildings also cannot do without them. Manufacturing water storage tanks is a business that fits perfectly within the “third world lifestyle,” says Heril Bangera, CEO of Kenyan-headquartered diversified manufacturer Flame Tree Group (FTG).

Bangera started one of FTG’s subsidiaries, Roto Moulders, in 1989 at the age of 18, manufacturing plastic water tanks. Growing up in a middle-class suburb in Nairobi, he was familiar with steel tanks that were common at the time. But he felt plastic would cost less and function better. Back then his goal was to make four tanks a month. Today the company manufacturers hundreds per day.

Bangera says he can’t imagine running a plastic tank manufacturing business in a developed country. In Europe, for instance, most households have a constant water supply. But in Kenya, and other neighbouring countries where FTG sells its products, a water tank is an important, even crucial, requirement.

“Everybody needs water [so] everybody needs a tank – every factory, every office [and] every home,” he explains. “Our plumbing allows us to have a water tank. In Europe if you have a water tank out there during winter everything freezes so nothing is going to flow through. The water supply here is also not consistent, so we tend to store water for times when there is no supply. And therein lies the opportunity to manufacture water tanks.”

Roto Moulders makes tanks varying in size from 100 litres to 24,000 litres. The smaller sized tanks are used by households, while the bigger variety is often bought by schools, offices, farms, hotels, construction companies and even refugee camps.

However, the sustainability of the business has often been questioned. People don’t buy tanks every day, and most will only need a few in a lifetime. After all, his company promises the tanks should last up to 25 years.

Bangera thinks otherwise. First, there is a housing shortage in most urban centres in Kenya. Each of those houses, when constructed, will need a water tank. The construction company will likely need water storage solutions too, to avoid the inconveniences of erratic supply. And another opportunity for the future lies in population growth.

“A family of four which lives in one house today will, in the next 15 years, live in three houses as the children grow up and move out. So there is constant growth for the business.”

Back in 1989 when Bangera started manufacturing tanks he didn’t think too much about the numbers behind the business. Would plastic tanks be cheaper to manufacture than steel tanks? Would people actually buy plastic tanks?

“You are so naive at that age. I was confident that I was going to be very successful. I think when you are young and very ambitious and you haven’t seen failure – that is what you believe.”

Bangera got just under Ksh.500,000 (about $4,900) as capital from his father, also an engineer. He began experimenting by manufacturing tanks using made-at-home equipment.

“We really failed for a couple of years until we got someone to help us modify the equipment,” he recalls. “We sold the first tank to someone in Kisumu (a lakeside city 350km from Nairobi) for about Ksh.3,000 ($29). The cost of transporting the tank from Nairobi to Kisumu was nearly the same. We began wondering whether it was really viable to sell the product.”

He admits he lost confidence along the way and many times questioned himself. It took Roto Moulders about eight years to become profitable.

“I’d have done a lot more calculations and I wouldn’t have started off. It is sometimes good to be a bit foolish in your young age,” he says.

One of the reasons for FTG’s growth is that it has focused on building businesses that solve some of Africa’s unique problems. Take sanitation, for instance, a business FTG recently ventured into. An estimated 2.3 billion people across the globe don’t have access to proper sanitation, most of them residing in Africa and Asia.

“Water and sanitation are two key problems within our continent. When we were selling water tanks to [refugee] camps or schools we saw there was a need for toilets,” Bangera explains. “We make [plastic] pit latrine slabs which replace the wooden slabs… We have the mobile hut that goes on top of that and we also make septic tanks. We are looking at water and sanitation as growth areas.”

A key advantage of mobile plastic toilets is the ease and speed at which they can be deployed. FTG has supplied its sanitation solutions to places like Somalia, during crises.

The pit slabs have been used during emergencies outside of Africa too.

“When there was an earthquake in Haiti and they had a cholera outbreak, there was a need for toilets. They sourced toilet slabs from us in Kenya. So we supplied Haiti in spite of them being next to the US.

“The US has all the technology but didn’t have the product because it is simply not relevant to their market. This is a product relevant in Africa – and that is our niche.”