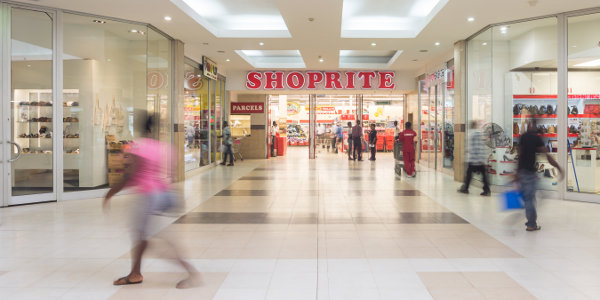 A Shoprite outlet at the Accra Mall, Ghana

South Africa’s low-income consumers are not spending as much as they used to. This is partly due to economic troubles that have led to an increase in inflation and interest rates, eroding disposable incomes. Although it recorded some growth, the performance of the Shoprite brand was affected by declining purchasing power. Shoprite has continued to subsidise bread, milk, rice and other basic foodstuffs.

However, its sister brand, Checkers, which targets mainly middle and higher-income consumers, posted better results and emerged the top-performing supermarket brand within the group in terms of turnover growth.

South Africa’s economic woes are unlikely to end anytime soon, with some noting the country is in recession and the World Bank predicting growth of less than 1% in 2016. South Africa is suffering from a weak currency, high unemployment and a drought. In coming months, the group expects “challenging trading conditions” to persist in its home market, with fierce competition among retailers that will likely put margins under pressure.

But the group is more optimistic about the other 14 sub-Saharan African countries where it operates, where growth boosted overall performance in the six months ending December 2015. “In [other] African countries… growth has also slowed, but as yet consumer spending has not been affected to the same extent as in South Africa,” said the company.

Shoprite did, however, highlight supply line issues – such as red tape and long lead times – as challenges it faces outside of South Africa.

However, Shoprite CEO Whitey Basson noted Nigeria’s economy “showed surprising resilience” in the six months under review. Shoprite opened four new stores in Nigeria, and to further prove the group’s confidence in Africa’s most populous nation, it intends to add another four outlets by mid-2016.

Angola, another country reeling from the fall in oil prices, is still offering opportunities in retail. Shoprite said Angola “performed very well” and was the biggest contributor to turnover from countries outside South Africa, replacing Zambia, which was impacted by low copper prices. Growth in Angola was partly due to the opening of two new outlets. The group expects a further boost in turnover from Angola after the reopening in April of a large store in Palanca, near Luanda, which burnt down in July 2014.

Low-income consumers increasingly prefer shopping closer to home and will go to informal traders if supermarkets are too far away. Usave, the small-format retailer that offers a limited product range, is one of the brands affected by the growing tendency among consumers to buy from informal shops within close proximity.

“The high cost of transport… has seen many consumers shop closer to home at informal traders where short-term credit is also available,” the company said. But more affluent shoppers, who don’t have to worry about transport costs, preferred centrally located large-format supermarkets.