It is predicted that by 2050 the world will have an additional two billion people and food production will have to increase significantly as a result. According to a report by the German Agency for International Cooperation (GIZ), small-scale farmers will be crucial in feeding this growing population. 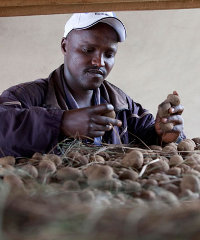 Smallholders farmers and big companies often find it difficult to do business together.

While it would be mutually beneficial for companies and smallholders to do business together, they frequently find it difficult to enter into productive commercial relationships, with both sides often lacking trust and access to the other.

The report has identified five structural challenges that need to be addressed, and understood, in order to improve this business relationship for both parties.

With market research and consulting firms being scarce or non-existent in rural areas in developing countries, it can be difficult to get up-to-date market information. From the company’s side, it can be difficult to obtain vital information on smallholder markets, whether they are selling to, or sourcing from, smallholders. Companies selling products to small-scale farmers do not know what they want, how much they are willing to pay or how to market their products to these small-scale farmers. Companies sourcing from smallholders are often also not aware who is selling what, at what price and where.

Small-scale farmers generally lack business skills like cash-flow management, accounting and the ability to engage in strategy development, and typically have minimal formal education, if any. “Companies consequently struggle with the lack of capacities possessed by their smallholder business partners,” continued the report. “However, they often lack the skills and resources to provide the required training and education themselves.”

Typically, the business relationship between a small-scale farmer and a company is drenched in insecurity, making it difficult for one to trust the other, enter into long-term commitments and take additional risks. The income of small-scale farmers is characteristically low, insecure and irregular, and the majority of developing countries usually only offer limited insurance coverage and social safety nets needed to absorb losses of a failed harvest or an unexpected fall in prices.

“Less than 5% of people with low incomes have access to general insurance coverage, and even fewer to agriculture-related policies,” the report pointed out. Small-scale farmers also risk theft of livestock and produce.

Markets in rural areas are also mostly informal, and contract-enforcement support systems – like the police or courts – are also generally unavailable, time-consuming or unreliable. Contracts therefore often have to be based on trust.

Companies also lack the formal means to enforce contracts with small-scale farmers, and bureaucratic and formal processes for gaining operating permission usually create long delays. In addition, these companies can also face political risks in some countries. According to the report, “business regulations are often patchy, administrative systems are inefficient, and legal insecurities exist in areas such as the requirements and procedures for exporting agricultural products, or for registering a product for sale on the local market.”

Typically, small-scale farmers in developing countries lack financial resources and assets, making it even more difficult to improve their financial situation. According to GIZ’s report, insufficient access to credit is also tied to the lack of formal property titles, as many smallholders cannot show an official document certifying the land’s legal ownership to a bank. This means that small-scale farmers are unable to use their land – their main resource – as collateral.

“This capital constraint makes it difficult for smallholder farmers to make investments that don’t pay off immediately, as for example in machinery or long-term crops such as trees,” added the report. “Even the acquisition of financing for inputs covering a single cultivation period often constitutes a challenge.”

In addition, the report stated that 55% of farmers surveyed in sub-Saharan Africa said credit for input purchases was their leading desire.

“Companies are used to suppliers that can invest in order to meet demand, as well as to customers who can finance comparatively large investments. They find it difficult to provide financing for infrastructure that their potential partners lack, such as machinery or storage facilities,” the report explained.

In many developing countries, and indeed in many rural areas in Africa, small-scale farms are widely dispersed and can be difficult to reach as roads are either in poor condition or non-existent. While Africa is seeing improvements in its infrastructure, ports are often outdated with a limited capacity while railway lines are poorly maintained. The result: companies suffer a long transport time, and often high costs, due to inadequate transport infrastructure.

Lack of electricity is another infrastructural problem that many African small-scale farmers experience. According to the report, sub-Saharan Africa has the lowest electrification rate where only 31% of the overall population has access to electricity. As a result, they rely on candles and kerosene for light and diesel fuel for production-related activities. “The high cost of energy for tasks such as processing is a serious disadvantage in highly competitive markets,” continued the report.

Once these challenges are understood, there is potential to turn them into business opportunities. In a recent article, How we made it in Africa published examples of how some existing companies have managed to overcome these challenges using innovative ideas.