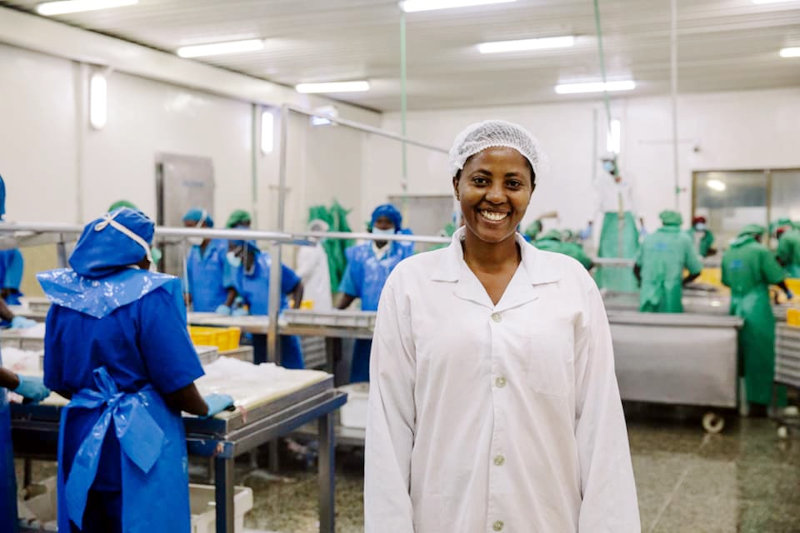 Kati Farms – based in Kampala, Uganda – produces a range of processed fish products. Founder and CEO Lovin Kobusingye started the company with an innovative product that became very popular: fish sausages. Today, Kati Farms has its own branded outlets and supplies the local and regional market with 17 different products. Jeanette Clark spoke to her about the growth of the company.

Lovin Kobusingye’s dream job was to work in a bank. It was what she studied for but when she graduated, there were no employment opportunities in the sector. “Unfortunately, I couldn’t find a job. In retrospect, though, I can say it was very fortunate.”

To gain work experience, she volunteered at a fish-farming co-operative and was tasked with mobilising more farmers to become part of the initiative. When she started, they had just 34 members but soon the numbers started to climb towards the target of 1,000.

“As the numbers grew, the challenges also came out of the woodwork. The biggest was market access. Every day, the farmers would ask: where, where, where? Where are we going to sell our fish? It was stressful because I could not find a solution,” she recalls.

She was knocking on the doors of supermarkets and fish processors, with no luck.

One day, she pitched the idea of fish sausages to an existing processer but the company did not think it was a viable idea.

Kobusingye did not agree. Street roasters and supermarkets were selling beef, chicken and pork sausages. But no one was thinking of fish as a possible ingredient for sausages; to her, it was a clear gap in the market and a massive opportunity.

A conversation with an acquaintance in 2011 led to her being introduced to the Uganda Industrial Research Institute (UIRI). She wrote a concept paper and was accepted into the programme. For eight months, she refined and developed her sausage recipe and the value-addition process.

Kobusingye vividly remembers her first sales. “There was a conference in Kampala hosted by the Uganda Investment Authority that focused on the fish industry and I was not invited,” she laughs. “However, I went to the conference organiser and offered to supply free fish sausages that they could serve to the participants for breakfast.”

After questioning Kobusingye about the quality and origin of the sausages and being reassured it was being processed at UIRI, a government facility, Kati Farms got its first big break.

She was given five minutes to talk about her product before breakfast was served, telling her story, and asking for feedback from the participants, which included commissioners and ministers. The sausages were a hit and the journalists in attendance swarmed her for interviews. Kati Farms was featured in newspapers and on television and sold all available stock.

“That was the most exciting day. It validated the product.”

Kobusingye had to quickly register her company to meet the demand that flowed from public coverage of her innovation.

A product in demand

Fish sausages, as a product choice, ticked all the boxes. “It was the one solution that would solve the farmers’ access to market as it could absorb the numbers we had in supply,” she says. 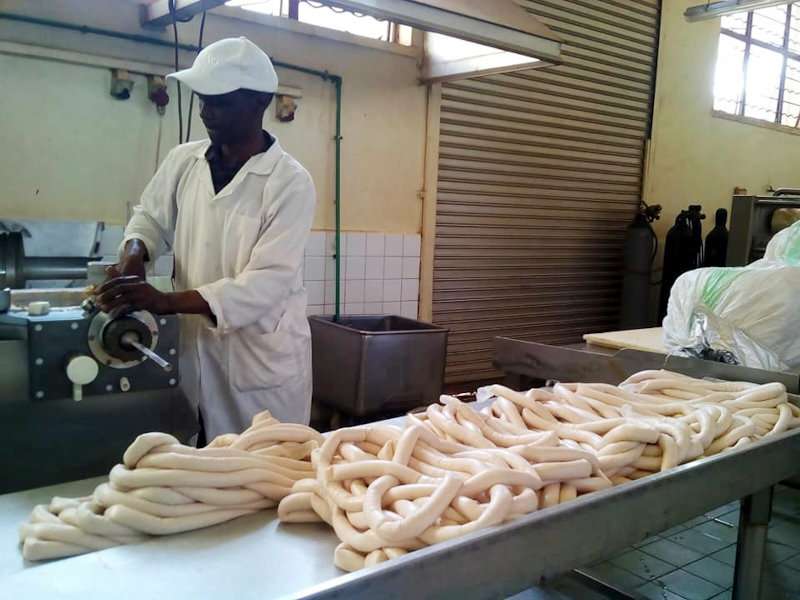 Kati Farms started with the production of fish sausages.

Using fish as an ingredient also addressed concerns about traditional sausages being unhealthy or unsuitable for consumption by some groups, such as the Muslim community. “I was trying to come up with a new product that was going to address those health issues, and it worked.”

Once registered in 2012, Kati Farms had to move out of the Research Institute’s buildings. While grateful for the institute’s support she acknowledges it was the right time. “Working in the government facility was limiting. For example, the building closed at certain times and over weekends. I needed to move forward in becoming a commercial enterprise.”

Using the little bit of sweat capital and savings available, Kati Farms purchased land on Hoima Road in Kampala. Despite the big capital expense at the time, not having to pay rent greatly assisted with cash flow management. The company remains at these premises to this day.

The growth of the company has been slow and gradual. Every bit of profit has been ploughed back into the business. Small grants (such as a UNDP grant the company received right at the start) and zero-interest loans from the government as part of its youth support programme, helped pay for equipment and cover other expenses.

The farmers also came to the party and would supply fish on credit, only expecting payment once Kati Farms was paid.

“Along with the supportive farmers and some awards and a small commercial bank loan, we could build the company to what it is today,” she says. “People were willing to help but I had to be proactive. Support is available if you show persistence and commitment.”

Once there were customers for the sausages, the requests for other fish products started coming in.

“We would get calls from hotels and supermarkets asking for fillets, fish burgers or fish powder. Every product on our inventory is due to demand,” reveals Kobusingye. “I would never say no. We would figure it out, find the supply, process, and provide the product. Then we were able to test costing to see if the product would be commercially scalable.”

During the first lockdowns under Covid-19, the company bought motorcycles for home deliveries. It has since also opened five branded outlets in the city.

The company exports some of its products, mainly to the other eastern African countries. “We are not yet in Europe or the US. We want to learn from home and once we believe we are successful and the market is saturated, we will look at markets outside the continent.”

Kati Farms aims to provide healthy and nutritional products to a segment of the market that cannot afford expensive items. Its fish powder, for example, is packed in small 50 g and 80 g sachets that allow customers to add a nutritional supplement to their cooking at an affordable price.

Challenges on the horizon and new opportunities

Kobusingye lists the possible impact of climate change as a concern as her company relies on aquaculture. “We have had a lot of floods and this will impact operations. We will have to adapt and diversify,” she says.

To this end, she has been working on a new product idea after seeing very few options of frozen potato chips on the shelves of local supermarkets.

“I have been to the US and noticed how big the sector is there. Here, in Uganda, the only options you can find are imported from South Africa or even Asia, even though we have a ready supply of potato crops. The prototype product that I have developed is healthier as it takes only 15 minutes in the microwave. I see definite opportunity there.”