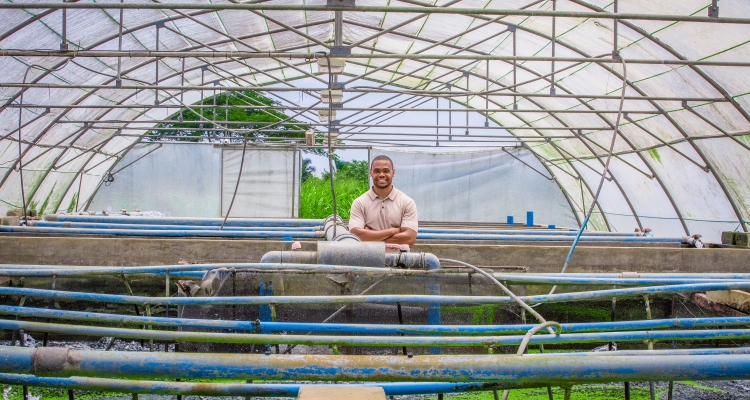 Tell us more about your aquaculture business?

Frutos da Lagoa Limited, was established in 2019. We run a semi-intensive fish farm here in Caxito area of Angola with the capacity to produce 500 tonnes of catfish a year.

Our goal is to become a regional processing centre for all types of fish products with nationwide, or even international reach, depending on the African Continental Free Trade Area (AfCFTA) distribution capacity.

Our social outreach programme provides smallholder farmers with training, fingerlings and feed to grow their own fish. We shelter outgrowers from market variations by guaranteeing buyback of grown fish according to agreed quality standards. [Outgrowers are farmers contracted by a firm to ensure constant supply of agricultural products].

To scale our social outreach programme, we partnered with Coopera, a credit cooperative, to finance initial capital investments and working capital.

We bypassed the institutional difficulty of extending credit to small farmers by building trusting relationships with the community and using social pressure to persuade people to honour their financial commitments.

As a result, we have been able to achieve good returns at acceptable risk and we are now in talks to obtain commercial bank financing.

Trading under the AfCFTA has started in January 2021. How do you think it will benefit businesses such as yours?

Fortunately, Angola has signed and ratified the AfCFTA. As for the implementation, I am cautiously optimistic. The free trade agreement can be a great opportunity for Angola to capitalise on its comparative advantages of relatively cheap energy, reasonable infrastructure and plentiful arable land to become a regional agro-industrial trade hub.

The free trade agreement could significantly increase my customer base. Yet, caution is also warranted. According to the World Bank’s rankings, Angola needs to improve its business environment. Cross-border trade scores particularly low.

Hence, the implementation of the AfCFTA must be coupled with drastic institutional changes to improve business conditions and local market competitiveness.

However, I am hopeful the AfCFTA will drive the Angolan government to urgently implement much-needed market reforms.

What led you to start Frutos da Lagoa?

When I started this catfish farm on a piece of rural land owned by my parents, I did not know much about the business. I had a career in infrastructure and oil and gas. Yet, I thought it could be a fun adventure to diversify into agribusiness.

Like any other business, our goal is to deliver long-term value to our shareholders. While profits are important, they are not the only metric. When we focus on value rather than maximising profit, we have a broader approach to measure the impact of our business.

With high levels of poverty, youth unemployment and many other social issues, we believe the only way a business can deliver long-term value to its shareholders is by including and growing with the community.

How much investment did you put into the project?

Why did you choose to have women as smallholder farmers?

Gender equality is an important value for our company. However, we never had to make deliberate gender inclusion programmes because the women were already there. In Angola, women have always played an active role in the agricultural sector. Men tend to look for jobs in urban areas. On the other hand, women are also adept traders selling their products in the informal markets.

This way, women have become an integral in all stages of our supply chain, from outgrowing (contracting people to supply agricultural products), to distribution and commercialisation in the informal market, in which we deal almost exclusively with women who have raised money to buy large quantities of fish.

How do you encourage people in other regions of the country to see the benefits of this business?

The best way to encourage others is to have a profitable business, not just aim for positive social impact. As soon as others realise there is money to be made, they will enter the market, which in turn will benefit the community.

Any challenges so far?

My immediate challenge is how to best strike a balance between acceptable production levels and keeping employees safe during the Covid-19 pandemic.

My long-term challenge is to create a sustainable ecosystem for aquaculture in Angola. As one of the few large-scale fish farms here, I worry about all aspects of my supply chain. In a market like ours, it is always a chicken or egg paradox. If there is no business, there are no suppliers; if there are no suppliers, it is hard to sustain a business.

What have you learnt in this business so far?

This business has led me to develop empathy as an important skill. Before I started the fish farm, I worked in oil and gas and logistics. Although I was experienced in business, I had no idea about the difficulties people in rural areas face. I realised that every plan needs to be contextualised to its area of implementation. A deeper understanding of the reality of the people we work with is necessary for long-term success.