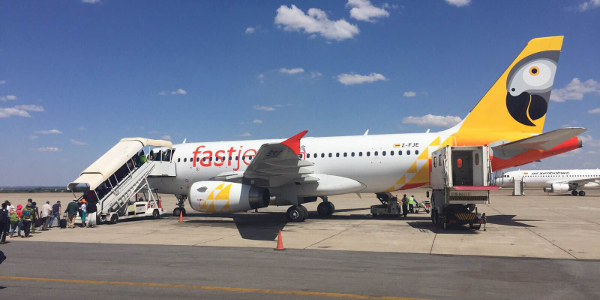 This week low-cost African airline Fastjet officially launched Fastjet Zimbabwe with its inaugural flight between Harare and Victoria Falls, which will now be serviced three times weekly. According to the group’s chief commercial officer, Richard Bodin, the airline has big plans for the market.

“We already have been designated by the Zimbabwean authorities to fly to three other countries – Malawi, South Africa and Botswana – and we fully expect to service five or six designations to other countries will be approved in the not too distant future,” he told How we made it in Africa.

“So now we are just waiting for the approvals at the other end. We don’t believe it will be too long in coming, and then we will launch flights to those countries.”

In the South African market, which has a large Zimbabwean diaspora, the airline is looking to service Harare-Johannesburg at least twice daily. “We are also looking at the opportunity to fly to Cape Town from here, and also Durban,” added Bodin.

Other countries Fastjet Zimbabwe is considering servicing regionally include Kenya, DRC and Mozambique.

The airline is also planning to offer more routes domestically, with hopes to add Zimbabwe’s second largest city Bulawayo to the list, as well as increase flight frequency between Harare and Victoria Falls.

The decision behind launching in Zimbabwe was based on growing demand for travel to and within the market, especially at low-cost.

“We see a lot of inbound traffic from other carriers – for example South African Airways – that have been enjoying significantly higher yields than you would normally expect on these routes. So we see a commercially strong opportunity,” explained Bodin.

“To give you an idea of the sort of traffic we are looking to stimulate, there are up to 100 buses a day operating between Harare and Johannesburg… And our lowest fare is cheaper than the bus and certainly, in terms of time, risk and hassle at borders, flying is by far the better option.”

Bodin estimates that up to 40% of the carrier’s target passengers have never flown before.

Fastjet Zimbabwe is also looking to cater to the international tourism market. The airline has recently signed a contract with the Dubai-based carrier Emirates to allow its passengers to book Fastjet flights through Emirates’ sales channels.

The airline, owned by London-listed Fastjet, launched towards the end of 2012 with domestic routes within Tanzania. It has since launched international routes to and from Tanzania’s commercial hub Dar es Salaam.

In 2013 Fastjet’s CEO Ed Winter told How we made it in Africa that he underestimated the extent that African governments are willing to block competitors to protect their own flag carriers.

And according to Bodin, the airline has been trying for more than two years to get permission to fly from Nairobi to Dar es Salaam, “and still the Kenyan authorities are doing all they can to block that application”.

However, due to Zimbabwe’s Indigenisation and Economic Empowerment Act requiring foreign companies in the market to give up 51% ownership to local shareholders, Bodin said they have not experienced any protectionism from the Zimbabwean government.

“Fastjet Zimbabwe is a Zimbabwe airline, staffed almost exclusively by Zimbabweans, and on that basis the government has looked very favourably on it.”