Farai Gundan is a Zimbabwean-born member of the diaspora living in the US with a number of accomplishments under her belt. She is an MBA graduate, TV and radio personality, African entertainment blogger and co-founder of two tech startups. She is also a speaker and commentator on the role of women in Africa, and was even featured on the Oprah Winfrey Show. 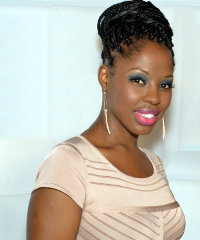 During a 5am (US time) interview, How we made it in Africa asked her what it was like to juggle so many endeavours at once. “Call us a tad bit crazy, but my co-founder and I are working on two tech startups at the same time which obviously means a lot of work for us. But I think that’s the exciting thing about Africa, the opportunities for innovation and disruption are tremendous.”

One of her startups, Farai Media, is an online and mobile advertising platform focusing on Africa. According to Gundan, it was born out of the frustrations of trying to monetise her African entertainment blog, a problem she saw a number of other African-focused publishers also facing.

“With the growth of African publishers, we wanted to offer an online and mobile advertising platform that specifically targeted African audiences, both diasporan and on the continent,” explained Gundan. “With Farai Media, we also wanted to be specialists of the African consumer audience so that we could connect top brands with influential publishers to reach and engage African consumers.”

“There are numerous dynamics that factor in with the differences between online advertising here in the US – or the West – versus on the continent,” she continued. “Online and mobile advertising in Africa is still in its infancy. There are several inputs along the value chain that are needed to grow this ecosystem, such as internet ubiquity [and] low internet costs for consumers.”

Gundan added that while US consumers are much more sophisticated with their online purchasing habits, she is seeing a steady rise in online advertising in Africa, with more brands beginning to understand the impact of mobile and online advertising.

“Africa is second to Asia in mobile subscriptions. The advantage of this is that, if you use mobile/online advertising, your consumers can potentially carry your marketing message with them on a device – as opposed to on television, radio or on a laptop where they literally have to go home or [to the] office to log on to see your marketing message. I see how effective it is here in the US and that it could have a bigger impact back on the continent.”

Gundan’s other tech startup is AfricaTripDeals, an online African travel reservation platform. It was launched due to the potential and growth she and her partner saw in the continent’s tourism industry. She explained that there has been a rise in both people travelling to the continent, and Africans travelling between African countries.

“A lot of your hotels, airlines are beginning to specifically target the African audience because they appreciate the value of the African dollar or the African pound. For instance, Africans in the US have a projected combined spending power estimated at US$300 billion. Part of that spend means that plenty of us Africans are travelling back home in huge numbers, either for vacation or business. This benefits companies in the travel industry to do some targeted marketing for that particular segment.”

While Gundan said that American brands and companies are still very cautious when it comes to the African market, their interest has been caught by the potential in the African consumer.

“It’s untapped,” she highlighted. “I am a little bullish when it comes to Africa; there are about 1.2 billion people and there are reportedly about 300 million Africans with significantly more disposable income in the middle class. Potentially, that is a huge consumer base that is emerging from the continent of Africa; 300 million is approximately the size of America’s total population. That’s pretty significant for a brand that is looking to tap into Africa. I should add that the other side of this equation is that African consumers need to [be] better educated on saving and growing money beyond their pay cheques.”

“From a branding perspective, the ability to get the consumers to be aware and convert them into loyal consumers of your brand, is exciting,” she continued. “However, targeting African consumers should be nuanced to factor in cultural norms and consumption habits of this particular audience.”

In addition, with the American market being so saturated and African countries becoming more political stable in general, Gundan said that Africa is becoming one of the last places for US companies to really expand.

“I think it was CNN that said that the next gold rush is hotels establishing a footprint in Africa because they realise that African travel is growing, both from an international perspective and intra-country travel… and as you see increased accountability and transparency with African governments, people are becoming very confident that they can actually do business in Africa with Africans.”

She added that the media perspective on Africa is also changing. “We are now witnessing the narrative on Africa shift from the unfortunate and premature description of the ‘hopeless continent’ to ‘Africa rising’… but we also have to be very cautious on what we mean by ‘Africa is rising’. Yes, Africa is growing rapidly from a very low base. Yet, when you look at the industries on the continent, a lot of them are extractive industries with the majority of our economic activities concentrated at the start of the value chain.”

“I think that we need to move further along the value chain and develop our economies to go from just production of raw materials to also processed finished goods and services. To be the economic powerhouse that we are projected to be as a continent, we also need to focus on activities that unlock economic opportunities and have value adding potential.”

As a serial entrepreneur, Gundan advises Africa’s aspiring entrepreneurs to seek out mentors, partner with those that share the same values, know their target audience, and have a clear focus on what they want to achieve in business.

Her advice to business women on the continent is to make sure that they communicate what they want in life, and not to be afraid of going for it. “Don’t be afraid to raise your hand and ask. Let your presence be known.”

“I think that African women are one of the best kept secrets. The demographic dividend in Africa of our women is one of our greatest and most enduring assets. I honour us, and I honour those who have gone before us and have paved the way,” she concluded.