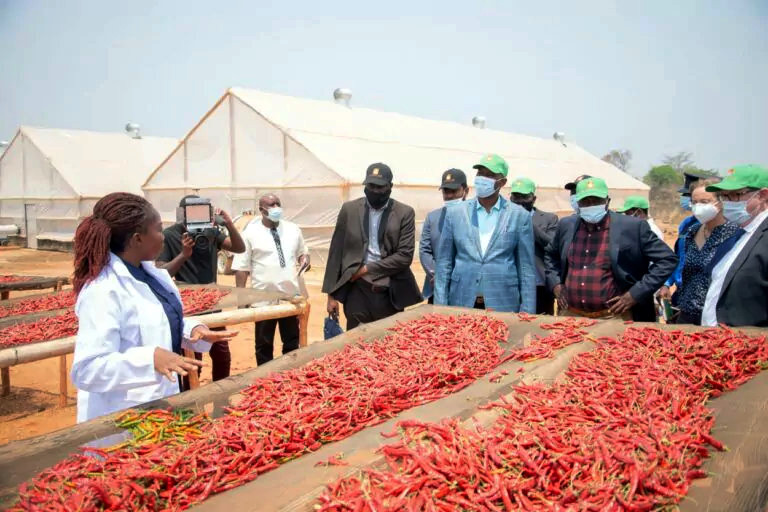 Chillies are grown by Amatheon Agri and in partnership with surrounding smallholder farmers.

Germany-based agribusiness company Amatheon Agri is ramping up its production of spices and superfoods in Africa as global demand for these products continues to increase. Amatheon has farms in Uganda and Zambia where it cultivates crops for bulk export and as inputs for its products.

The company’s Zambian unit recently inaugurated new processing factories for spices and superfoods at its farm in the Mumbwa District. At the facility, chilli and superfoods cultivated on Amatheon’s land and by surrounding smallholder farmers will be cleaned, processed and packed for the export market. Amatheon’s chilli processing facility will allow for products to be whole-dried, flaked or milled and exported to off-takers across the world.

Amatheon started out producing staple crops – such as maize, wheat and soya – in sub-Saharan Africa more than a decade ago. Some years later, it noticed the potential for healthy, organic and natural foods and became one of the pioneers of superfood production in Zambia. It began supplying chia seeds and quinoa to European markets in 2019.

As part of its diversification strategy, Amatheon undertook large-scale plantings of various chilli varieties in 2020.

“We looked at the markets worldwide and saw that superfoods were receiving a lot of attention, especially gluten-free products like quinoa and chia. These are usually grown in South America but we believed there was no reason why we could not cultivate them in Africa. We did some tests in Uganda, Zambia and Zimbabwe and started with large-scale production in Zambia two years ago. We also installed processing capacity in Zambia to get the products ready for bulk trading and export to Europe, said Amatheon CEO Carl Heinrich Bruhn in an earlier interview with How we made it in Africa.

Amatheon’s target market for its superfood products are people living a “lifestyle of health and sustainability”. “This is a growing segment worldwide, particularly in megacities; for example, it is spreading on the west coast of the US in California as well as in Australia,” explained Bruhn.

Victoria Cavanagh, director of international sales and marketing, says Africa is home to several crops that can benefit from the health and wellness trend: “Baobab and moringa are probably the most known superfoods from Africa that have been receiving some attention. Teff and fonio also seem to be growing in recognition and, lately, I have seen hibiscus gain a lot of visibility.”

Amatheon has both its own land and works with smallholder farmers. According to Bruhn, this strategy has been an meaningful factor in the company’s traction to date. “One important contributor to our success is having our commercial farm in the middle of the outgrower farming community as a centre point or anchor. That is where we, ourselves, test and learn. We get the expertise to improve our operations and we transfer it to the outgrower programme.”

Originally, Amatheon’s smallholder farmer partners cultivated staple crops such as maize and soya. Once the company completed trials for quinoa and chia on its commercial farms, it introduced these crops to the smallholder farmers.

“In the beginning, we used 1,000 hectares of our commercial farm for quinoa production, with about 300 to 400 hectares under irrigation. At that time, 100% of our quinoa came from commercial farming. Today, we have about 4,000 outgrower smallholder farmers producing quinoa and the split has moved to about 30% commercial and 70% in favour of the outgrower programme. This creates market access for these farmers for high-value export-focused products,” Bruhn added.