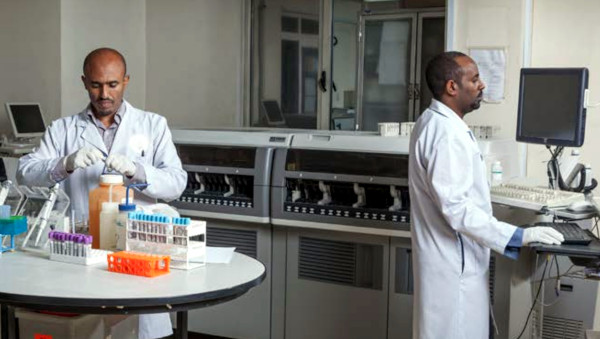 [Read part one of our interview with Owino: Investor reveals East Africa’s most attractive opportunities]

Ascent has made several investments in Ethiopia; what are some of the opportunities and challenges there?

Taking a top-bottom approach, Ethiopia is home to 110 million people, the second largest country in Africa in terms of population, after Nigeria. The median age of the country is 19.5 years, so it’s a very young market.

We have invested in the country’s healthcare diagnostics industry through the company International Clinical Laboratories (ICL). It is the largest privately-owned medical lab business in Ethiopia but, for context, it generates less than a third of the revenue of the largest privately owned lab in Kenya. This is because the concept of diagnostics is still new in Ethiopia. ICL has embarked on an exercise of sensitising health workers to use diagnostics in helping identify illnesses in patients; doctors are realising the value of sending patients to a lab for tests so that they can treat the exact problem. From a revenue standpoint, you could say ICL is a small entity – in comparison to similar players in Kenya – but the emphasis should be on the market potential. It is only a question of when, not if, such an entity will be three times the size of the largest player in Kenya.

Overall, Ethiopia’s economy is opening up and it’s growing in leaps and bounds, sometimes above 10%; the lowest has been about 7% year-on-year growth. The government has been deliberate in positioning the country as the manufacturing hub of East Africa, and we see this being implemented both at the policy level and on the ground.

Another of our investments in Ethiopia is Allied Chemicals, which produces chemicals like LABSA (linear alkyl benzene sulfonic acid) and sodium silicate, both of which are used to manufacture soap. It is an import substitution play, and we have been able to onshore the production of some of the necessary inputs for soap production. This has a positive trickle-down effect of creating jobs in Ethiopia. This business has seen consistent growth and did very well in 2020 in response to the coronavirus pandemic, which saw a heightened level of hygiene and increased demand for soap.

Our third investment in Ethiopia is in Universal Plastics, the largest plastic injection moulding and drinks packaging manufacturer in the country. It provides packaging and crates for milk, beer and soft drinks for companies like Coca-Cola and Diageo.

In terms of challenges, the biggest problem we have is the availability of hard currency (forex) which is necessary for buying inputs for production in the global market. The government has been making significant investments in infrastructure, which requires a lot of hard currency but the negative effect of this has been the crowding out of the private sector. We’ve learnt to manage our forex very carefully there because it may be a long time before we get our next allocation. When you receive an allocation of hard currency, you need to buy as many inputs as possible, so that even if the next allocation is delayed, you have what you need to maintain operations. As a result, businesses in Ethiopia tend to invest a lot more in working capital, which is something you wouldn’t typically see in a country such as Kenya. For example, for a similar business operating in Kenya, we’d keep stocks for one and a half months, whereas in Ethiopia we’d keep input stocks for six months. So you need to be more cautious and increase your investment in working capital.

When we first went to Ethiopia, we were one of two private equity firms looking at investments there; the economy has changed a great deal. Manufacturing in Ethiopia is now much more competitive, although countries like Kenya do currently have an advantage with more advanced human capital. But if you have a serious outlook for Ethiopia, and are willing to have a 10- to 20-year horizon, this is the right time to invest for the first-mover advantage.

You’ve previously mentioned some investors see Ethiopia as the gateway to Africa; what do you mean by this?

We’ve attracted interest from some big global players and they believe the gateway to Africa is through Ethiopia. For one, the domestic market is sizeable but these players also plan to use Ethiopia as their base to serve the rest of Africa. They are not as concerned about the issue of foreign currency because they can bring in hard currency if they export their services across Africa. Having the Ethiopian Airlines network is a key factor; as the biggest and most successful airline in Africa, you can get almost anywhere on the continent from Addis Ababa.

To give you an example, consider our medical lab business, ICL. The local market for medical diagnostics in Ethiopia is tiny but the opportunity beyond Ethiopia is huge, particularly if you look at Djibouti, South Sudan, Burundi, Congo, even the Central African Republic. Do any of these places have diagnostic services? These destinations are all only a few hours from Addis Ababa. There is an opportunity to partner with people in those markets to collect samples, fly them to Addis Ababa via Ethiopian Airlines, do the test and email the results to the doctor. The doctor can then give the correct diagnosis that same day or at the latest, the following day. It will be much shorter than sending samples to South Africa or India. Taking this model as an example, investing in Ethiopia means you have immediate access to 110 million people, and potentially 400 million people in the region. With a unique outlook like this, the market is for you to take.

Identify your most successful investment to date.

Definitely Allied Chemicals in Ethiopia. It has demonstrated consistent double-digit revenue growth in dollar terms despite devaluation of the birr and has been our best performing investment. We anticipate we will need to expand the capacity of our plant threefold in the coming years to meet market growth.

However, in terms of holistic impact, ICL is one of our most successful investments. It is changing the whole medical industry by showing that diagnostics work and help solve health problems better than just diligent care. ICL has been constant in educating doctors, and even provides additional tests free of charge to ensure prescribed treatments work so that doctors know which medicines are most effective and which to avoid. ICL’s founder, Tamrat Bekele, trained in the United States and returned home to use his training to benefit Ethiopians. ICL has received Joint Commission International accreditation (a US accreditation for laboratories) which makes it one of just three laboratories with that rating across Africa.