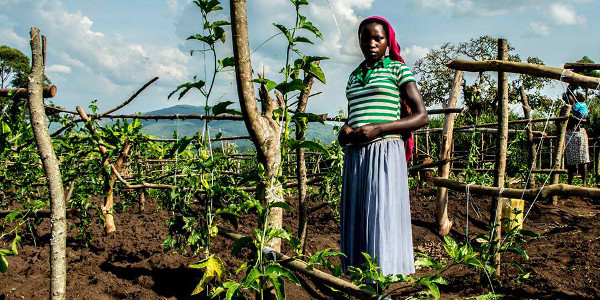 Most young people would hesitate before leaving a stable job for an entrepreneurial venture. But not for a plucky 34-year-old Ugandan, Eric Kaduru, who made a decision to leave his advertising job in the capital city, Kampala, to become an agripreneur – an entrepreneur in the agriculture business.

Kaduru had grown weary of the early-morning traffic and day-to-day struggle in Kampala, and was ready to try something new. A magazine article about an agricultural project triggered his interest. He and his wife did some research, and that’s how the idea of passion fruit farming was conceived. He quit his advertising job in 2011 to found KadAfrica, a commercial passion fruit farm and outgrower network, which links farmers with buyers.

KadAfrica, located in Fort Portal, a town in the Western Region of Uganda, concentrates on commercial production of export-quality passion fruit. It sells fresh passion fruit used to produce juice and pulp countrywide to markets as well as to juice companies such as Coca-Cola. KadAfrica products can now be found in markets in London.

A desire for positive social change drives the company. On its website it lists early marriage, high school dropout rates among girls and girls’ lack of economic power as social problems it hopes to tackle. Its vision statement sums up its purpose: “Enable girls to become economic drivers of their communities.”

Kaduru told Africa Renewal that at the beginning, most of his employees were women who needed money for food and for their children’s school fees. The women also complained that their husbands were not providing any support.

In rural Uganda, women face economic hardships and many young girls are still out of school.

KadAfrica provides training and passion fruit vines to girls, especially those between the ages of 14 and 20 who have dropped out of school, so that they can set up viable agricultural enterprises and earn income. It assists the girls to start their own cooperatives and trains them in basic business management skills and agriculture. The company then connects the girls to domestic and international markets.

The company has engaged more than 1,600 girls since it began operations.

More than 70% of households in Uganda grow food for subsistence only – meaning little to no income. As a result, farming is not seen as a business, but rather a chore delegated to women and girls.

“It was challenging to convince them that it can be a profitable business,” Kaduru said.

With time, after his work with three farmers proved profitable for them, many more wanted to work with KadAfrica.

“Finding access to money is a huge headache for young people, plus getting the best-quality workers also costs a lot of money,” Kaduru said, adding “Finding good partners really helps”.

In 2015, at just 31 years, Kaduru was awarded the Africa Food Prize, becoming the youngest laureate since the prize was established in 2005 to honour achievements in agriculture in Africa.

Encouraged by this and other accolades, he gives this message to African youth: “When you have an idea, if you pursue it, if you persist, you’ll succeed… The quicker you fail, the faster you learn, the quicker you grow. So don’t give up.”