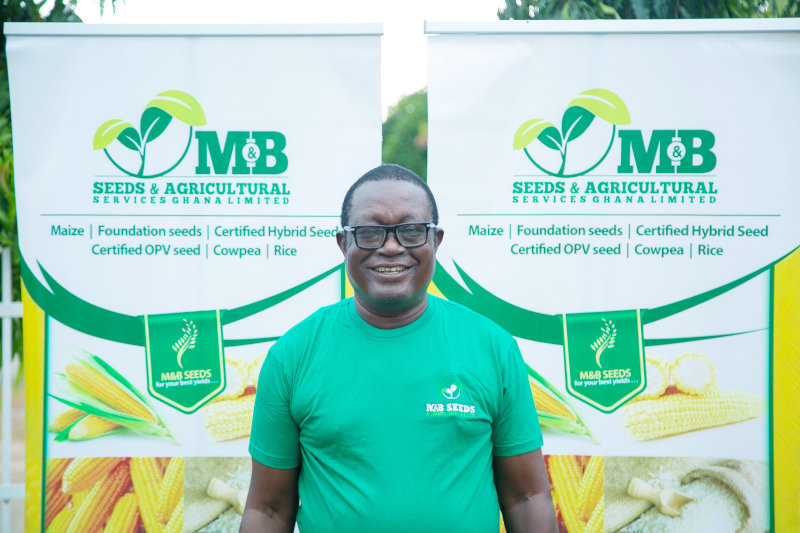 In the early 1990s, Ghanaian Ben Kemetse was studying biology and aquaculture in Norway. He would watch the news about the famine in Somalia, seeing aid agencies drop food parcels from the air to assist those who were starving.

“Seeing that, it sat in my heart. It challenged me to become a farmer,” Kemetse says.

In 1996, he returned to Ghana and began farming, mainly cultivating exotic vegetables like bird’s eye peppers and green chillies for export and using irrigation in the dry months to grow leafy green vegetables for the local market.

Financially, it was a challenge. The yields he was achieving did not translate into sustainable income streams to make the farm viable.

“I lost a lot of money; the overhead costs were too much. I realised I had to increase my productivity and this could only be done through better, improved seeds.”

Kemetse researched the benefits of using different types of seed – especially the hybrid varieties – to boost yields, but it was only after a friend prompted him to apply for an Alliance for a Green Revolution in Africa (AGRA) grant targeting aspiring seed companies, that the idea for M&B Seeds and Agricultural Services firmly took root.

“During my career as a farmer from 1996 to 2008, I had dealt with many people; unfortunately, not all of them were faithful or truthful but Monica was an exception,” says Kemetse. “When the opportunity came to form a company, she was the partner I wanted.”

Awuku was working in the extension services department of the ministry of agriculture.

Today M&B uses genetically pure breeder seeds procured from the International Institute of Tropical Agriculture (IITA) to grow its own foundation seeds. These seeds are provided to farmers who are part of the company’s outgrower supplier base who grow the certified seeds the company treats and processes for sale. M&B offers three types of hybrid maize seed to the public, as well as rice and beans seed. It also provides consultation services to farmers.

Quite early in the company’s existence, Kemetse decided hybrid seed was going to be much more viable and profitable than the open-pollinated varieties. A hybrid is created by crossing two different varieties of the same plant. It provides better yield but seed produced by the plants grown from a hybrid seed cannot be re-used like its open-pollinated counterpart.

According to Kemetse, the three-way hybrid cross was not pure; two of the parent lines were not what was indicated on paper. “This meant we were giving seed to the farmers that did not deliver on what we promised. We wrote reports to AGRA and I did not relent until there was a solution,” he explains. This was one of the first business lessons he learnt: always do your own research.

M&B procured the foundation seed directly from the IITA to ensure its quality and purity. This was not accepted good practice at the time; however, he persisted in using the direct link and not working through local sources who were promising high quality but not delivering.

Initially, Kemetse used the foundation seeds to start production on some land. Within two years, he produced about two tonnes of seed for sale, with himself and his co-founder as the only employees. Today, M&B produces 300 tonnes of seed annually and has approximately 20 permanent staff members, with double that number in casual workers employed part-time in the processing facility and M&B’s fields.

Expansion through outgrowers and mechanisation

Four years after M&B’s launch, Kemetse realised they would need to expand production and started recruiting farmers as outgrowers. With a loan facilitated by AGRA, Kemetse purchased equipment from China to assist in the processing of the seeds which, up to that point, had been done by hand.

Currently, the company has 150 outgrower farmers who each produce the seed on plots of land ranging from two to 10 hectares.

The total outgrower tally is a rolling number. Every year, M&B recruits more farmers as well as terminating the relationships with others who did not adhere to the conditions set by the company.

This was another important lesson, notes Kemetse. “I found plenty of challenges in the farmers’ attitudes. People were not honest about their operations and we were not achieving our yield.” M&B now provides extensive training and support to its supply base and evaluates it regularly.

A lot of time was spent on educational drives; firstly, regarding the benefits of using certified hybrid seed as opposed to using seed taken from existing harvests. He had to combat market perception that this was a way to control the purchasing of seed every season, instead of a method to boost yield and production.

He did many radio interviews and hosted demonstrations and invited farmers. “We put the seed in small packs and would distribute them at churches. I would drive around and when I saw farmers growing maize, I would hand them some seed and ask them to listen to the radio programmes. Those days were difficult as the original grant was not enough to cover all these costs.”

It took five to six years to get proper market acceptance from the farmers. The policymakers and officials took even longer. “They only listed our seed in government tenders in 2019,” he says. “It was resilience, commitment and passion that ensured this company still exists.”

About 80% of M&B’s distribution is through agro-dealers.

In some areas, where there were no agro-dealers, M&B set up shop themselves and paid someone a stipend to manage it. Once these shops developed into viable ventures, the company would exit.

Kemetse adds that M&B does not have the capital to have an office in every region where it would like to operate. Its reach, however, is expanding steadily outside the Volta region where the company has its base.

In 2017, the government’s Planting for Food and Jobs policy was implemented and subsidies for seed came into play. M&B still distributes through the agro-dealers but the subsidy is paid directly to the company.

“My actual competition is the farmer who still thinks he can recycle his seed,” says Kemetse. He explains that the use of certified hybrid seed is still not widely used in the country. “Yes, the multinationals are coming, but they will also find it difficult to sell. Our seed matures fast, dries fast and the yields are competitive. It also requires less fertiliser than some of the seed from multinationals,” he says.

Even though some of the farmers have requested M&B fertiliser and agro-chemicals, this is not the company’s priority. “If I have enough finance to cater for the seed needs of the country, then we will diversify,” he says.

Finance remains a big challenge. In 2017, a bank approached M&B with the offer of a possible loan. Kemetse and the team spent a substantial amount of money to get the application finalised and have still have not had a response. Any finance secured will go towards the building of a larger warehouse where surplus seed can be stored.

“My first priority is to increase seed output, educate the farmers and bring quality seed as close as possible to the doorstep of the farmer. The profit-margin on farming is extremely thin. We don’t want the farmer to lose that small profit they make because they have bad seed, bad inputs or bad agronomic inputs.”