Chris Ngoforo is the founder of Rooti Creations UK, a company that produces an educational, cultural and language-specific range of Rooti dolls aimed at Africans and their diaspora. Each doll is programmed to speak over 20 phrases in four different languages from a specific African geographic region. For example, the Nigerian-origin Nina doll, can speak over 20 phrases in four of the ethnic languages of Nigeria – Igbo, Yoruba, Hausa and Ibibio. The Shiroh doll can speak in Swahili, Kikuyu, Somali and Luganda of Kenya, Somalia and Uganda. 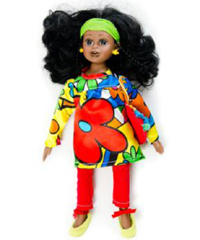 Ama is originally from Ghana and can speak Twi, Ga, Ewe and Krobo. She wants to be a doctor someday.

How we made it in Africa asks Ngoforo about the inspiration, business opportunities and meaning behind the Rooti dolls.

What was the inspiration for the creation of these Rooti Dolls?

Over the years my wife and I have found it extremely hard finding real black dolls that can truly connect with our little daughters. The dolls out there in the market are nothing close to the real image of a black child in terms of features and other attributes. They are either too thin, too light or chiseled-faced and even the complexions of most of the dolls are kind of whitewashed. The unfortunate effect of this stereotypical misrepresentation is a case of low self-esteem among black children who have been directly or indirectly made to believe less in themselves as a black child. They have been made to believe that you have to look like a white doll to be accepted as beautiful or even good.

Secondly we observed that over 90% of children born or living in the diaspora and millions in Africa do not speak or understand their mother tongues. Our research made us understand that the reason for this is not because our children don’t want to learn their mother tongues, but more because there are not many essential tools that can easily be both educational and fun at the same time, like Rooti dolls. The danger of this is the rapid rise in the demise of African ethnic languages as the children become disengaged from their cultural heritage.

Who are your target customers and why do you think they will be interested in these dolls?

Rooti dolls are a range of first ever educational fashion dolls that speak various ethnic languages which are targeted primarily at children between the ages three and 12 without excluding those of older ages. So our customers include all fashion doll lovers and collectors and families with children both in Africa and the diasporas (UK, Europe, USA, Canada, Australia, etc.).

Rooti dolls were not made just to offer children comfort and fun – it was more as a response to the rapid demise of African ethnic languages. So we know that the dolls will be purchased by both government bodies, agencies, NGOs, and schools, in an effort to preserve our rich African languages.

In your opinion, why do you think African languages are being increasingly included in the ICT and commercial arena?

We are privileged to be witnessing the overwhelming technological advancements taking place in virtually the whole of the African continent: from Kenya to Ghana, South Africa, Egypt, Nigeria, etc. The continent is rapidly becoming a business gateway with its teaming generation of vibrant young professionals. And since ICT is the bedrock of any sustainable economic development, we believe it is very important that African languages be integrated into the system to enable speakers, like farmers and market women, to be able to communicate better.

Have you sold any dolls yet? If so, which ones are most popular so far?

The dolls are selling very well and the feedback has been very encouraging. We started very small but the results so far have been quite amazing, not just here in the diaspora but in Africa as well, as a huge percentage of children born both in the diaspora and in Africa don’t understand their mother tongues.

Though the dolls are all selling well, Nina, Ama, Nubya, Shiroh, Keza and Esther dolls do kind of attract more sales, perhaps because of the populations of the speakers of these languages in the diaspora and Africa as well.

Other than Shoprite, are there any other well known stores where the dolls are sold?

Apart from Shoprite Africa, we are speaking with other chain stores and distributors in Africa where the dolls will be stocked. Some of them are companies like Deacons Kenya, Nakumatt Kenya, ToysRus South Africa, Melcom group of stores in Ghana, Kwatsons Ghana and some other stores in other countries in Africa.  We are currently supplying to stores in South Africa, Kenya, Nigeria, Ghana, Zambia, Zimbabwe, DRC, Angola, Mozambique, Madagascar, Namibia, etc.