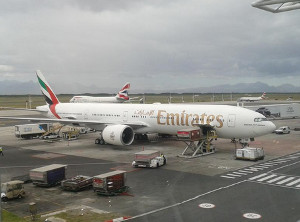 So said Tim Clark, president of Emirates, at the recent Africa Global Business Forum held in Dubai. The event was a Dubai initiative to boost the presence of Gulf companies in Africa, while at the same time position the emirate as a gateway for investment into the continent.

While it is not cheap to operate on the continent, he said the airline generates satisfactory yields from its African operations.

Emirates currently flies to over 20 destinations in Africa and during an earlier session, Mohammed Al Shaibani, CEO of Dubai’s sovereign wealth fund, said Emirates is sometimes referred to as “the national carrier of Africa”.

Clark highlighted Dubai’s role as a facilitator of trade. He explained how African traders used to travel via Dubai to buy merchandise in the Far East. Dubai-based business people then spotted the opportunity to purchase goods in bulk from suppliers in China, and sell it directly to the African traders. And because they bought in large quantities, got better prices. It also eliminated the need for African traders to travel all the way to China.

According to Clark, Africa’s aviation industry is being held back by inadequate airport infrastructure. For instance, many African airports can’t accommodate the Airbus A380, the world’s largest passenger liner, of which Emirates has over 50 in its fleet.

Only a small percentage of African carriers currently fly internationally. “Today two-thirds of the capacity going in and out of Africa is by foreign carriers,” said Clark.

He added there are many opportunities for Emirates to grow its business in Africa, and to open new routes. West African countries, such as Equatorial Guinea and Benin, are possible future destinations.

Emirates also recently entered into an agreement to help the Angolan government develop its national airline.

Commenting on the Ebola crisis, Clark said there were indications the epidemic is impacting ticket sales from Asian countries such as China, Taiwan and Vietnam. This is because of a false perception that Ebola is an Africa-wide problem.

Clark however didn’t seem too concerned about the impact of the virus on the airline. The continent, he said, has always faced challenges and despite this latest one, “there is always business to be done in Africa”.