Alongside the tragic human cost of the Ebola outbreak in Africa, there is also a severe economic impact. It is raising the cost of foodstuffs and heightening the need for spending on healthcare infrastructure. This could trigger a rise in public debt and general government budget deficits in affected countries, as government struggle to divert enough financial resources to contain the outbreak. 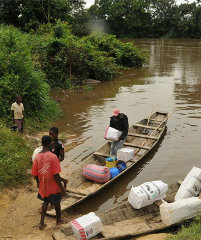 A key impact of the Ebola outbreak is that food prices are rising in affected countries, as flights are suspended to these areas.

Nigeria’s outbreak is especially damaging as it is a key emerging market. It accounted for 33.7% of total GDP in sub-Saharan Africa in 2013 and is one of the main catalysts for Africa’s rising economic prosperity. Tourism has also been hit in sub-Saharan Africa even in countries that are currently unaffected by the virus, which is likely to negatively impact real GDP growth in the region.

The far-reaching effects of Ebola on the African economy

A key impact of the Ebola outbreak is that food prices are rising in affected countries, as flights are suspended to affected areas. With poverty so widespread in the affected African economies, this can have catastrophic effects on already meagre incomes. In Nigeria for example, 76.4% of the population live below the international poverty line of US$2 per day, while in Liberia the figure is 84.7%. This means that rises in food prices will render it unaffordable for the many living on such low incomes. The real weakness in many economies in sub-Saharan Africa is that they are dependent on export trade with economies outside Africa for their economic growth.

The limited transport and air connections to and from affected economies will reduce trade and economic growth at a time when their governments need extra finances to tackle the disease. Travel and tourism in the affected countries has been limited or stopped by major airlines such as British Airways and Kenya Airlines in countries hit by the Ebola outbreak. Crucially, paranoia among travellers that the disease could spread to other countries has triggered a downturn in tourism to other countries in Africa that are not affected. Korean Airlines for example has cancelled flights to Kenya out of fear of the disease spreading to the country.

The drop in trade and tourism combined with the rise in healthcare infrastructure spending in affected countries is likely to trigger a rise in government debt-to-GDP ratios and a slowdown in economic growth as well as job losses. While Guinea, Sierra Leone and Liberia are relatively minor economies, Nigeria is a key driver of economic growth in sub-Saharan Africa. It accounted for 33.7% of total GDP in the region in 2013 and is one of the main catalysts for Africa’s rising economic prosperity, meaning that real GDP growth in the region is likely to be hit as a result.

Affected countries need to work hard to isolate and contain the virus outbreak in order to stem the human cost as well as further economic damage. The commercial impact of the outbreak is likely to be felt for many years to come however.