Members of East African Community will formally begin Thursday the process of integration. Despite some reservations from smaller countries, analysts believe the union will greatly benefit the region. 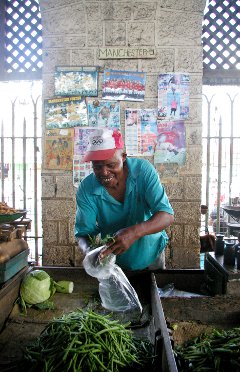 A trader in Mombasa, Kenya. Critics of East African economic integration say that Kenya is likely to reap the majority of the benefits.

The Common Market Protocol – signed last November by members of the East African Community – will take effect officially on 1 July, as the region moves closer to the dream of a politically and economically unified East Africa. That’s when Community members Kenya, Tanzania, Uganda, Rwanda and Burundi will open their borders for the free movement of goods, services and citizens throughout East Africa.

The protocol is part of a vision that would see the nations eventually form a federated state, complete with a single currency and unified foreign policy. While critics of the East African Federation are sceptical such a union can be achieved by the proposed date of 2012, the integration set to begin in July has been heralded as an economic and political achievement.

“In the global world a single country, and particularly a single African country which has a very small economy, it makes sense for there to be a greater bloc, for two reasons,” says Shaw. “One: the potential for trading within that bloc is great, and we have seen it. We have seen it even with the tentative moves that have gone so far. The increasing trading between Kenya, Uganda, Tanzania, to a lesser extent Rwanda, etcetera, has increased year after year. It makes sense. The second point there is that the bigger your market, that is much more attractive for investors, locally and internationally.”

The Protocol also will eliminate the vast amounts of restrictions and regulations often required to do business in the region. In addition to the elimination of trade barriers and border taxes, citizens of East Africa will be able to freely relocate within the community, bringing education and expertise where they are needed most.

But not everyone is optimistic. Critics of the union say that Kenya, the region’s largest and most dynamic economy, is likely to reap the majority of the benefits. In smaller countries, such as Rwanda and Burundi, there are fears that Kenya’s larger businesses will push aside the local economy.

According to Shaw, these fears distort the larger picture.

Despite the regional optimism, it likely will take some time before the borders are opened. According to Shaw, the borders in East Africa are notoriously tight and the elimination of red tape will not happen overnight.

The East African Community now will look to consular integration, which could see the bloc adopt a common immigration policy within the coming year.

The new market is already attracting attention. Turkey’s ambassador to Kenya announced his country would establish an Export Processing Zone within the East African Community to take advantage of the region’s potential. – VOA