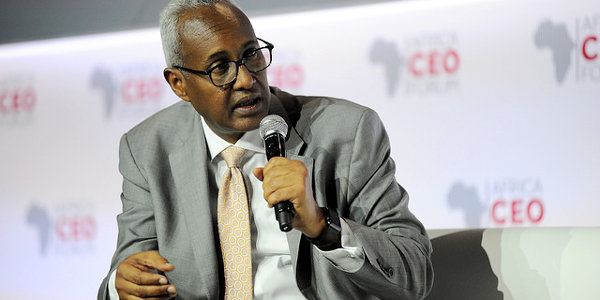 The tiny of country of Djibouti wants to leverage its geographic location, at the entrance of the Red Sea, to become a logistics and light-manufacturing hub. One way it is trying to do this is by establishing free-trade zones where goods can be landed, manufactured and re-exported without being subject to customs duties. Jaco Maritz caught up with Aboubaker Omar Hadi, chairman of the Djibouti Ports and Free Zones Authority, on the sidelines of the recent Africa CEO Forum – held in Geneva, Switzerland – to find out more about the country’s ambitions. Below are slightly edited excerpts of the conversation.

It seems like in the past year or so, Djibouti’s economic opportunities have received increasing attention in the media and elsewhere. Is this a fair assessment?

It is a fair assessment because of the investments happening in Djibouti in terms of transport infrastructure – roads, rail, ports and free zones – as well as developments in the energy sector. Over the last three years we’ve invested around US$2bn, and in the next five years we are planning to invest a further $15bn.

Give us an overview of Djibouti’s free zones, both in terms of what is currently on the ground as well as in the pipeline.

There are two [free zones] for the time being. The first one was developed in the early 1970s and is only 14 hectares (ha); the second one was developed in 2002 and is 17 ha. So now we are really moving to a bigger scale by developing a new free-trade zone industrial park of 4,800 ha. Out of this 4,800 ha, we’ve started developing phase one, which is 600 ha. We are investing around $225m – the contract has already been awarded and construction has started.

We are trying to attract factories and industries from countries where labour costs are rising. Mainly Chinese companies are interested to invest, because their wages in China went up recently. In the coming five years, 85 million jobs will be delocalised out of China, and many will go to Africa. We are preparing ourselves to attract a large share of these businesses – to export goods from Djibouti to Europe and the Middle East as well as east African countries.

Which type of industries are you targeting?

We are looking at light industries such as assembly lines for vehicles and consumer goods – things that are going to be re-exported. You have to understand that Djibouti is not a big market, but it is a gateway to bigger markets. What we did was to locate the ports inside the free zones – the ports and free zones have the same external perimeter fence. Consequently, the movement of goods – such as raw materials or semi-finished products – from the port to the factory inside the free zone are not subjected to customs duties. The same applies for re-exported products.

There is no forex control in Djibouti – our currency is freely convertible. You can transfer any amount you want from Djibouti, and you can bring in any amount you want. That is something that a lot of developing countries don’t have, or cannot offer. The investors that are going to establish their businesses in Djibouti have to know that they can buy spare parts and raw materials, and that there will never be a shortage of foreign currency. They can also repatriate their profits and dividends without any restraint. This is a very unique advantage that Djibouti can offer.

You mentioned Djibouti wants to attract companies from China. But with a relatively small population of just over a million people, does Djibouti have a large enough labour force to do the work?

That’s the question everyone asks. We will see. We want our people to get jobs first. For the time being, it is very hard for us to believe that all Djiboutians will be employed, and that we will start importing labour. We will be more than happy when we see all Djiboutians employed – [for now] that is our main objective.

Djibouti has an exceptional geographic location at the southern entrance of the Red Sea. The shipping route from the Far East to Europe is the world’s second-busiest. We have 99 ships passing by the coast of Djibouti every day. Djibouti is located at the crossroads of three continents – Africa, Asia and Europe. It is a very unique geographical position – we can almost say it is in the centre of the world.

Djibouti’s bigger neighbour Ethiopia is one of Africa’s fastest-growing countries, with its GDP expected to expand by an average of 7.3% from 2016 to 2020. How is Ethiopia’s soaring economy impacting Djibouti?

It is having a positive impact, because as you know Ethiopia is using the port of Djibouti for its foreign trade. All this growth that you are seeing in Ethiopia is coming through our ports, whether imports or exports. So we are benefiting a lot. The fast-growing economy of Ethiopia is really the engine of development in our region.

What are the challenges Djibouti faces as it tries to accomplish its goals?

The challenges are many – mainly the issue we have in the Indian Ocean regarding piracy. There are also some countries around Djibouti which have political instability – like in Yemen, Somalia and Eritrea. So those are the challenges, but we hope that in the coming years the situation will improve.