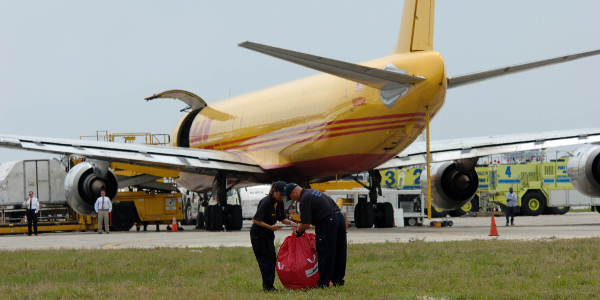 Deutsche Post DHL Group, the leading mail and logistics company, and the United Nations Development Programme (UNDP) office in Mauritius will conduct the disaster preparedness programme, Get Airports Ready for Disaster (GARD), from February 15 to 18 at the Sir Seewoosagur Ramgoolam International Airport in Mauritius. The workshop, developed by Deutsche Post DHL Group (DPDHL Group) and UNDP aims to better prepare the airports to handle the surge of incoming relief goods, should a major natural disaster strike.

Mauritius is prone to natural disasters, in particular, cyclones. As such, it is imperative that plans be developed to enable the airport to be able to support natural disaster management response. The workshop will bring together representatives of all aspects of airport operations, The National Disaster Risk Reduction and Management Center, the Red Cross, United Nations agencies as well as representatives of civil aviation authorities from Seychelles and Reunion Island.

“This important workshop will be the first of its kind to be held in Africa and the first for a small island state and will build upon the support of the UNDP in Mauritius in supporting Disaster Management and Disaster Risk reduction,” noted Simon Springett, United Nations resident coordinator for Mauritius and the UNDP resident representative.

Chris Weeks, director of humanitarian affairs at Deutsche Post DHL Group, said, “The GARD workshop allows us to work with authorities to increase the surge capacity of airports after natural disasters. It also helps to improve the overall coordination across various organisations involved in relief efforts when a disaster hits. Using our logistics expertise and the partnership with UNDP, we have together completed 30 GARD workshops and trained 600 people at airports around the world.”

Rahman Bholah, country manager, DHL Mauritius, said, “During natural calamities, the Airport becomes the center for international support after a natural disaster has hit. The GARD programme is coordinated jointly with the national stakeholders – from airport authorities to emergency services such as the special mobile force, the police helicopter squadron as well as the security manager. It is, therefore, vital to prepare all relevant stakeholders to be able to work hand-in-hand in this situation and to develop a contingency plan that will respond well to an emergency and its potential humanitarian impact”.

About the GARD programme

GARD was developed by Deutsche Post DHL Group in cooperation with the United Nations Development Programme (UNDP) with the aim of preparing airports in disaster-prone areas to handle the surge of incoming relief goods after a natural disaster occurs. It also enables the various organisations and aid agencies to better understand the processes at the airport in the aftermath of a disaster, which will help facilitate relief efforts and enhance overall coordination.

GARD trainers and materials are provided free-of-charge by DPDHL Group while UNDP leads the project implementation and facilitates the coordination with the government authorities. GARD training workshop arrangements and logistics costs are fully covered by UNDP with funding contribution by the government of Germany.

The GARD concept complements the disaster management programme of Deutsche Post DHL Group, including the DHL Disaster Response Teams (DRT). DRTs step in to organise the logistics at airports following a disaster, and this has been implemented at over 30 airports since its launch in 2005. The DRTs, which work free-of-charge and in close cooperation with the United Nations, help keep the flow of incoming relief goods moving at disaster-site airports. Both GARD and DRT form GoHelp, part of the Group’s corporate responsibility programme “Living Responsibility”. Both programmes are conducted in partnership with the United Nations on the basis of a voluntary engagement.