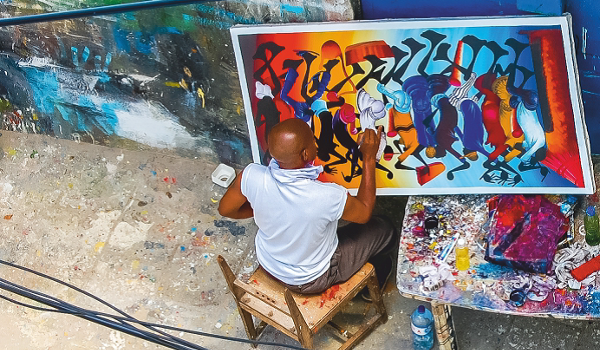 This article is an excerpt from Quantum Global’s Q3 2017: Africa Investment Review.

Creative industries are characterised by the use of creativity and intellectual capital as inputs in the production of goods and services. Increasing attention is being drawn to the sector after the release of multiple detailed reports by UNCTAD emphasising their growing importance for growth and development through the trade potential of creative products. The reference to creative industries usually applies to activities such as design, fashion, film, television, radio, music, the internet, performing arts, visual and graphic arts, digitalised creative content, software and other new media.

With proper investment in creative talents in sub-Saharan Africa, creative ideas can be turned into successful businesses. This is seen, for example, in Nigeria, where the film industry is undergoing important developments and has earned its own brand, labelled “Nollywood”; in Kenya, where digitalisation is expanding; and in different parts of the continent where the fashion and music industries are finally entering the international scene. These industries have a tremendous potential for income generation in Africa given the continent’s abundance of talents, cultural traditions and heritages. Moreover, the lack of a suitable support system to back the development of creative industries has confined these activities to mainly take place in the informal sector, where financial and other constraints limit their production to a small scale. To tap into the income generation potential of these industries in Africa, greater interest should be drawn to the informal sector.

Investing in informal and talented designers would strengthen African fashion both locally and internationally. Most small-scale production is realised in poor neighbourhoods where individual producers would have direct contact with a meagre customer base that helps maintain the business with no growth prospects. Lack of important financial support and business knowledge limits their capacity to move beyond their modest local market. This seems to be a common issue in the informal sector in general.

For the fashion industry, building a network that increases opportunities for exposure, besides providing financial and knowledge support to individual producers, would help to build up local markets in different African countries and boost the global presence of African fashion through trade. Euromonitor (2015) has reported that sub-Saharan Africa’s apparel and footwear market is worth US$31bn, and Africa together with the Middle East are expected to provide fashion’s long-term growth. This is an expanding industry in which efficient use of talents working in the informal sector can result in colossal income generation.

Beyond fashion, African visual arts in general have tremendous income potential. Although fashion is only starting to receive global attention, African artifacts have always held the international eye, even if most are generally perceived as craftworks rather than fine arts. Best known for their representation of African core culture, visual arts in different regions across Africa carry the regional ethnic identity that makes them popular in the tourism industry in Africa. The lack of proper art displays leaves most local artists to organise themselves and try to sell their products in the most touristic sites or in markets in different African cities.

The fact that artifacts trade mainly in informal markets further contributes to keeping most African arts at craftwork level. A solid investment should consist of providing more opportunities to increase local and international exposure of artifacts to change the perceived value of African arts and support skill-building for long-term growth prospects of the industry. There is already growing awareness around supporting professional artists in Africa, as seen with the setting up of the African Arts Trust, which facilitates exhibitions, and funds art organisations and various art projects. We may, however, still be missing investments to tap into the raw talents that are operating in the informal sector.

At this nascent stage of development of creative industries in Africa, the scarcity of intermediaries between the production of creative products and retailing to consumers shortens its value chain and thus keeps African creative products under-valued. The music industry, for example, is on the rise with countries like Democratic Republic of Congo and Nigeria among those leading the way. However, the shortage of recording studios not only encourages talented artists to venture overseas where they reach higher levels of recognition, it also limits the distribution of music products. This constrains the income potentials of this industry, since the distribution to consumers is mostly done through live performances and new media like YouTube, rather than recordings. The industry realises sizeable income losses from a general lack of respect for copyright. Nonetheless, many artists are succeeding in creating music with international appeal and have achieved global recognition. We can see this growing success in a country like Nigeria, which has joined South Africa in increasing its music infrastructure.

Another promising creativity-fuelled industry that is cropping up in Africa is digital technology. With the rise of multimedia and telecommunications technologies comes a global emergence of digital goods that are creatively answering different consumers’ needs. Just like the rest of the world, Africa is not staying behind. Kenya is now leading the world in mobile money with M-Pesa, Nigeria’s e-commerce platform Jumia is booming and attracting international investors like JP Morgan, and the entertainment industry has now very successful online streaming platforms with the biggest being iRoko for African entertainment. At the heart of this digital revolution in Africa are numerous start-ups with innovative and transformative ideas that mostly operate in the informal sector. The ideas stem primarily from the need to answer economic or development needs and they mostly come from an entrepreneurial mind-set that lives the realities of underdevelopment. Those are the entrepreneurs or potential entrepreneurs that mainly operate in the informal sector and need the right investment to turn their ideas into successful businesses.

Besides great income potential, another investment attraction for creative industries is their proven resilience to economic crises, as observed with the last global crisis. Their cultural and geographically-specialised characteristics give them a strong advantage on the global market and make them more resistant to international competition pressures. Cultural goods have the uniqueness of the region that facilitates the build-up of an indelible trademark that further supports the development and growth of the industry. One has to look at what the developed world has made of its movie and music industries, how visual arts (especially fashion) are now driving the society, and how digitalisation is affecting every aspect of our life, to realise the potential of building up African creatives industries. Beyond the income potential, this can also fuel development in the continent and further guarantee a great return to incoming investments.