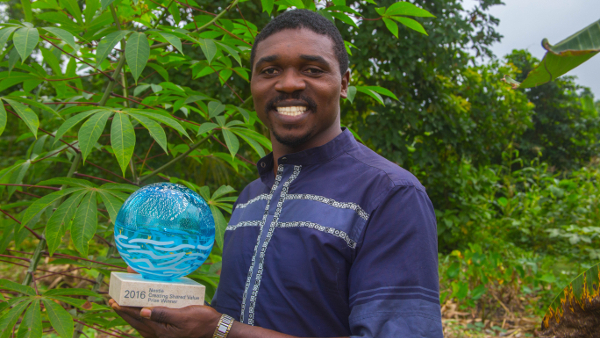 As a child, Cameroonian Ernest Atem Lefu often accompanied his parents to their farm, and witnessed first-hand how his father struggled to sell his crops at a fair price. Years later, after he quit his job as a conservationist, Lefu began building a solution to this problem.

His work eventually lead to the creation of AGRO-HUB, which Lefu describes as an agricultural production and marketing agency that gives smallholder farmers access to sustainable markets for their produce.

However, the business didn’t start out as what it is today. In 2009 Lefu and his partner, Valery Colong, developed a software solution, called SMS Deck, that connected farmers and buyers through SMS. But according to Lefu, although it helped with communication between the parties, “it did not solve the problem of trade”. The distance and lack of a proper address system made it difficult for the buyers to locate and deal with the farmers.

The next step was to intervene in the market itself. So in 2013, the partners bought a pickup truck and opened a fresh-food store called AGRO-MART, which retailed farmers’ produce.

While this idea did assist buyers and farmers alike, Lefu soon discovered that the capital required to sustain such an operation was just too large, and the outlet had to be shut down in 2014.

Aside from market access, there was another issue which hindered the sale of the farmers’ crops.

So Lefu went directly to the farmers and began training them. This included everything from advising on what fertiliser to use to which crops to grow, as well as how to manage their land in order to remain both self-sustainable and profitable. In addition to training sessions and workshop, information is also disseminated through text messages, webinars, podcasts, e-books, and videos.

“So we started working with both the farmers and buyers and we developed the programme, which we call: value chain development and financing – which works in two forms. It actually satisfies the buyer on one hand, and at the same time helps the farmer to produce what is necessary, thus adding more income to the farmers and helping them in terms of training.”

AGRO-HUB acts as a middleman between the buyers and farmers. According to Lefu, it “buys directly from farmers at fair prices and resells to consumers, still at very fair prices,” and “at all levels we shift all related cost to the buyers since we deal with smallholder farmers, whose lives we hope to improve”.

AGRO-HUB also processes cassava, a woody shrub with an edible root that looks like a large sweet potato, from its own factory. Working directly with 2,000 cassava farmers, its buys and processes the tubers into garri (a staple food in West Africa), flour and starch. These are sold to supermarkets, bakeries and restaurants. 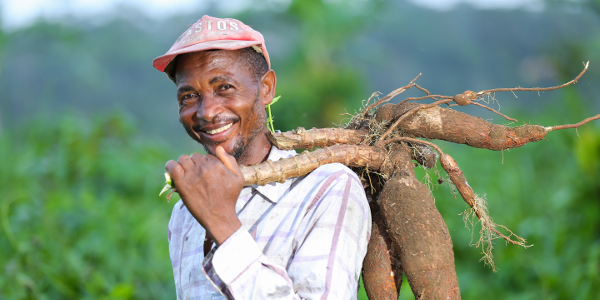 “That is where the market is, for example, last year we produced more than 250 tonnes of garri – it was still not enough, the demand is always very high.

“It is eaten by everybody in West and Central Africa – especially the Nigerian market. So we are selling in Cameroon and in the sub-region – it is a huge market here,” he says.

Having grown up working on a farm, Lefu who later also purchased and cultivated land of his own, likes to see himself as a “resource book” on agribusiness in sub-Saharan Africa.

“If you start up a business around here and I tell you it won’t work, it won’t work. You might go out to do a survey taking the statistics of people to be able to know the market before you start up a business – but what people will tell you is not [necessarily the truth]. Business is based on people’s culture, it is based on people’s way of life.”

According to Lefu, smallholders account for 80% of Africa’s farming sector – and to improve the industry, investors need to take a risk and start trusting small entrepreneurs who work with these small-scale farmers.

And, while Lefu praises NGOs for the training they do with farmers, he disagrees with their policy on handouts.

“NGOs do a good job in training, but NGOs do a very bad job [in that] they keep giving, they keep giving and people in Africa, smallholder farmers, just want to see a project of an NGO giving [handouts] and they just go there. They don’t actually look at how they are going to make a business from their half a hectare of land.”