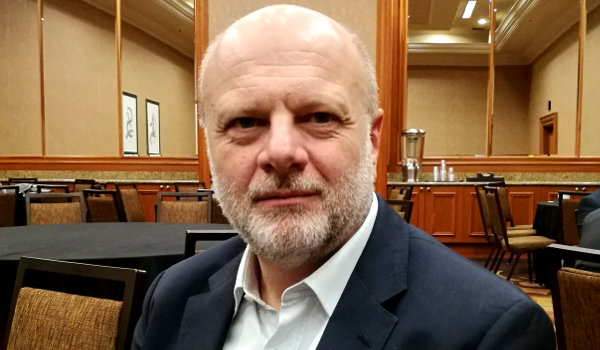 The internet of things (IoT) – which refers to the connecting of any device with an on and off switch to the internet and/or to each other – has been a hot topic of late. But IoT doesn’t only have consumer applications; it can be used in industries such as manufacturing, logistics and agriculture to make businesses run smarter and faster.

To find out more how companies can take advantage of industrial IoT solutions, Jaco Maritz spoke to Greg Kinsey, vice president for industrial solutions and innovation at Hitachi Vantara, on the sidelines of the Hitachi NEXT 2017 conference recently held in Las Vegas. Here are slightly-edited excerpts from the conversation.

For those not familiar with the term, how would you define industrial IoT?

Industrial IoT is integrating and aggregating data from things that play a role in industrial processes. Some industries have a lot of IoT data already. An example is the automobile industry, which is one of the most automated and sophisticated industries today. But on the other end of the spectrum, you will find industrial activities with close to zero connected objects or connected things. So in those cases the challenge is to determine where to collect data from, and what can be done with that data to improve operations.

If you look at many factories today, they have many assets, but they are what we call dark assets – they are not connected to the internet. So the first stage is to connect a machine. One needs to establish what kind of sensors would be used to connect it and how data can be gathered from that machine. For instance, the physical characteristics of a machine – such as motion, vibration or temperature – can be measured.

In most African countries the manufacturing industry is focused on relatively low-value-added production. Is industrial IoT only relevant for high-tech manufacturing, or can it also be applied in areas such as agri-processing or clothing production?

It is a good question. One shouldn’t confuse automation with digitisation. There are many industries that have minimal or no automation, but do have IoT data which can be collected and used. That could be something as simple as scanning the flow of physical objects, which will enable you to know where certain objects are at a particular time. A second example would be the use of video analytics – installing cameras that can look at any physical work being done, and compare it to what it should look like, and discovering anomalies. That could be used in industries such as agriculture or basic manufacturing.

So [IoT] is an opportunity that spans all types of industries. On the one extreme you’ve got sophisticated factories with lots of robots, lots of automation and huge amounts of data, but they are not using that data for anything. The other extreme would be a company doing very manual work that is not generating any data. They can start to collect data, start to codify that data and start to build a data platform.

What we see now, with the changes in IT, is that you can build customised solutions very inexpensively, and with that customised solution you can unlock value. And so typically when we do a project in manufacturing we get a 3:1 return on investment (ROI) – invest one million and you get three million back. And that can come through in improved quality, improved productivity, improved capacity, improved efficiency, etc.

In Africa I see a range of manufacturers. There are both international companies who manufacture in Africa, who bring with them a certain investment and a certain level of process capability that is at global standard. And on the other hand, you may find some very basic industries that are not so advanced in terms of processes and automation, but nonetheless they can also use IoT data. They can start to install sensors and start to collect data. The price of a sensor has dropped to the point where you can now start to sensorise physical processes that may have been too expensive before.

So in terms of costs, you don’t necessarily have to be a big operation to embrace IoT?

Not necessarily. Clearly, the bigger your operation the easier it is to get that payback. If you have a tiny operation, it’s trickier. But in theory you could find that 3:1 ROI – even as high as 6:1 ROI like we’ve had on some projects – in any scale of operation.

What are some of the common mistakes companies make when implementing industrial IoT solutions?

The first mistake people make is not taking the time to really understand the problem before jumping to a solution.

The second challenge is the cultural approach of innovation. Many engineers and many IT people are risk averse. They want to have things very well defined before they start a project, and they want to be successful at every step along the way. But innovation is often a step into the unknown. Innovation means learn as you go. Innovation means make mistakes, and learn from the mistakes. And that is a culture change for many industrial companies.

Do you have anything to add in terms of industrial IoT pertaining to Africa?

African economies hold huge growth potential. If we look at the history of technology, there are always cases where certain geographies had that leapfrog effect and they don’t have to invest in what was done the previous 10 years…

… Such as mobile telephony that leapfrogged fixed-line telecoms infrastructure in many African countries?

Exactly. And I think the same applies to IoT. I think that African industrial activity – whether that is transportation, logistics, manufacturing, food production – could benefit by being able to jump ahead, and move towards more digital-based concepts earlier.

Obviously every African economy looks different, but we see a lot of activity in northern Africa. Some American and European companies have moved their manufacturing to northern Africa, and they are putting in place world-class operations. We also see the transportation industry advancing with investments in airports and train infrastructure across the different countries of Africa. This area also holds huge potential.