“China’s gift to Africa.” The new headquarters of the African Union, a towering 20-storey building in Addis Ababa, Ethiopia, is so called because China picked up the US$200 million tab for the state-of-the-art complex. Ethiopia’s tallest building, completed in December 2011 in time for an AU summit the following month, includes a 2,500-seat conference hall. The gift prompted Ethiopia’s late Prime Minister Meles Zenawi to refer to Africa’s current economic boom as a “renaissance,” due partly to China’s “amazing re-emergence and its commitments to a win-win partnership with Africa”.

Not all Africans have welcomed China’s gift. West African political commentator Chika Ezeanya considers it an “insult to the AU and to every African that in 2012 a building as symbolic as the AU headquarters is designed, built and maintained by a foreign country”. However, as African leaders savoured the swanky complex in January, they took turns thanking China.

China’s largesse to Africa is not new. Previously China had either donated or assisted in building a hospital in Luanda, Angola; a road from Lusaka, Zambia’s capital, to Chirundu in the southeast; stadiums in Sierra Leone and Benin; a sugar mill and a sugarcane farm in Mali; and a water supply project in Mauritania, among other projects. At the fifth Forum on China-Africa Cooperation, held in Beijing in July 2012, Chinese President Hu Jintao listed yet more, including 100 schools, 30 hospitals, 30 anti-malaria centres and 20 agricultural technology demonstration centres.

African leaders continue to insist that the relationship with China is not a one-way street and that it includes more trade than aid. Indeed, trade between Africa and China was $166 billion in 2011, according to The Economist, a UK weekly. “The good thing about this partnership is that it’s a give and take,” Faida Mitifu, the Democratic Republic of the Congo’s ambassador to the US, told the Reuters news agency.

Eye on the pie

What then is China taking? In China Returns to Africa, a collection of essays published by Columbia University Press, the editors Chris Alden, Daniel Large and Ricardo Soares de Oliveira note, “The overarching driver has been the Chinese government’s strategic pursuit of resources and attempts to ensure raw material supplies for growing energy needs within China.” The world’s second-biggest economy currently buys more than one-third of Africa’s oil.

In addition, China’s industries are getting raw materials such as coal from South Africa, iron ore from Gabon, timber from Equatorial Guinea and copper from Zambia. 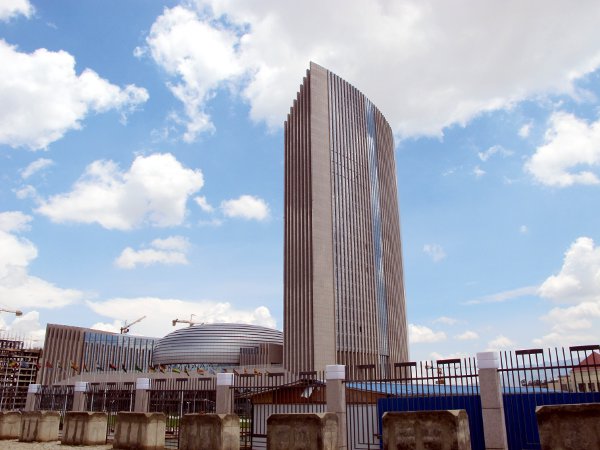 China picked up the tab for the new African Union headquarters in Addis Ababa.

Chinese industries also require new markets for their products and Africa is a potentially enormous outlet. “China is repositioning itself continuously for the new Africa that’s emerging,” says Kobus van der Wath, founder of Beijing Axis, an international advisory and procurement firm based in Beijing.

Chinese products have flooded markets in Johannesburg, Luanda, Lagos, Cairo, Dakar and other cities, towns and villages in Africa. Those goods include clothing, jewellery, electronics, building materials and much more. “Even little things like matches, tea bags, children’s toys and bathing soaps are coming from China,” says Bankole Aluwe of Alaba market in Lagos, Nigeria.

African consumers like Chinese products because they are affordable. “Chinese goods are cheaper than those from Europe and North America. In our business, price is very important to customers,” Aluwe says.

In an article in This Is Africa, Sven Grimm and Daouda Cissé state that in recent years China’s economy at times has grown at more than 10% a year, while cheap labour has helped reduce production costs – hence cheaper products. They also note, “The low level of the yuan [the Chinese currency] compared to the other major world trading currencies such as the US dollar, the euro and the yen” attracts African importers.

Already trade between Africa and China has grown at a breathtaking pace. It was $10.5 billion in 2000, $40 billion in 2005 and $166 billion in 2011. China is currently Africa’s largest trading partner, having surpassed the US in 2009. The Chinese government is eager to cement China’s dominance by burnishing its image through initiatives such as a $20 billion credit to African countries to develop infrastructure and the African Talents Programme, which is intended to train 30,000 Africans in various sectors.

China’s give-and-take relationship also plays out in other forms. Chinese construction firms are acquiring enormous construction contracts. The China Railway Construction Corp. (CRC) signed a $1.5 billion contract in September 2012 to modernise a railway system in western Nigeria. That same month, China South Locomotive and Rolling Stock Corporation, the largest train manufacturer in China, signed a $400 million deal to supply locomotives to a South African firm, Transnet. In February 2012 the CRC announced projects in Nigeria, Djibouti and Ethiopia worth about $1.5 billion in total.

Not all is rosy

China’s inroads into Africa’s agricultural sector include the 20 demonstration centres that President Hu said will “help African countries increase production capacity”. But there was a backlash when the government of the Democratic Republic of the Congo leased thousands of unutilised hectares of land to ZTE International, a Chinese company, in a deal that Oxfam, a UK charity, and others have labelled a “land grab”.

The “land grab” accusation may be overstated, according to a study by the UK’s Standard Chartered Bank. But the authors of the study believe that in the longer term China could well seek to import much more food from Africa which, by World Bank estimates, has 60% of the world’s uncultivated land. “Given Africa’s potential, China is likely to turn towards it.”

The furore over land adds to growing criticisms of the manner of China’s aggressive Africa penetration. Many Africans often refer to the poor quality of Chinese products and blame their low prices for the collapse of local industries. Comatex and Batexci, two leading textile companies in Mali, have been severely affected by cheap fabrics from Asia. “Hundreds of textile factories collapsed across Nigeria because they could not compete with cheap Chinese garments,” noted The Economist, which approvingly added that the Tanzanian government has stopped Chinese from selling in that country’s markets. Chinese are welcome as investors, but not as “vendors or shoe shiners,” said The Economist. In May, Neil Bruce, head of Zimbabwe’s Furniture Manufacturers Association, told the country’s parliament that imported Chinese furniture, “which is not strong,” is crippling the local furniture industry.

Performance assessments of some Chinese investors have not been stellar. The managers of Chinese-run mines in Zambia have been accused of not taking adequate safety measures for their local workers. A Chinese oil firm is exploring in a Gabonese national park, angering environmentalists.

On the flip side, Chinese investors face huge challenges in Africa. In an article in the Globe and Mail, a Canadian newspaper, David Berman maintained that cultural differences between Chinese and Africans, including the language barriers, often lead to social tensions, and that poor infrastructure in Africa makes business operations difficult. Frequent power outages in some countries raise production costs, while policies towards businesses are inconsistent. African governments can raise taxes at a whim. And most African economies are still fragile, subject to shocks from the global economy.

China hopes to minimise social tensions by bridging the information gap. Xinhua, China’s state-run news agency, has increased its bureaus in Africa to more than 20. In 2008 the China Africa News service was launched, to report “China-Africa news stories from African, Chinese and Western sources”. In early 2012 China Central Television (CCTV) opened a broadcast hub in Nairobi, Kenya – its first outside of its Beijing headquarters. Its strategy has been to hire some of Africa’s brightest journalists to report on Africa to viewers in about 170 countries.

“We have the news of what is happening in Africa, we tell a positive story,” says Pang Xinhua, the CCTV managing editor. But Yu-Shan Wu, a researcher at the South African Institute of International Affairs, sees a broader motive. “China is actively introducing its culture and values,” she says, and calls the push “the rise of China’s state-led media dynasty in Africa”.

In the view of David Shinn, former US ambassador to Burkina Faso and Ethiopia, the West is nervous about China’s activities in Africa. Shinn adds that China’s policy of non-interference in the internal affairs of African countries and its fast approach to aid delivery make it more attractive than Western donors, whose aid often comes with demands to improve human rights and democracy.

US Secretary of State Hillary Clinton recently warned against a “new colonialism in Africa,” in which it is “easy to come in, take out natural resources, pay off leaders and leave”. It was a veiled jab at China, according to The Guardian, a UK newspaper. But Clinton’s point echoed across the continent, and it appears that African leaders are now treading cautiously.

South African President Jacob Zuma warned in July that the current “unbalanced” trade pattern is unsustainable. He was referring to the tendency of Africa to export raw materials to China while largely importing only cheap manufactured goods. Maged Abdelaziz, the UN Secretary-General’s special advisor on Africa, told Africa Renewal that the continent must develop a strategy for its dealings with emerging economic giants such as China, Brazil and India.

Along this line, talks began in South Africa in June 2011 to merge three regional trade groupings (the East African Community, the Common Market for Eastern and Southern Africa and the Southern African Development Community) into a “grand free trade area” incorporating 26 countries with a combined gross domestic product of $1 trillion. Such a combined strength could give Africa a more assertive voice at the negotiating table.

The China-Africa relationship will get stronger. The editors of China Returns to Africa sum it up: So long as Africa’s development requires huge foreign investments, so long will China continue to be relevant. “Irrespective of the concerns being voiced in some circles in Africa, Chinese involvement is widely considered to be a positive-sum game.”