Chemvet Steel & Fencing (PTY) LTD started out in 1979 as a small business situated near to the City Deep abattoir in Johannesburg, South Africa, with the sole purpose of selling stock feed and remedies to farmers transporting livestock to the abattoir. 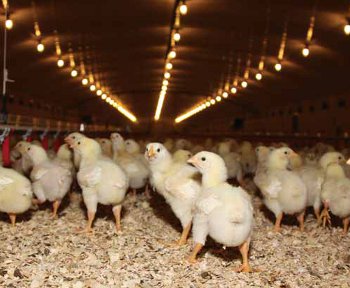 Chemvet Steel & Fencing provides farmers with new technology in the design of housing, and upgrading and extensions to housing, for poultry and pigs.

Thirty years later, the company has developed into a business with three divisions, delivering a wide product range and services to clients situated throughout South Africa and extending into neighbouring countries such as Namibia, Botswana, Angola and Mozambique.

The basis of the company’s growth stems from the ability of its founder, Attie Smuts, to cater to the needs of farmers. According to the company history: “Attie soon became renowned for his excellent service and the fact that he gave attention to the farmer’s needs, which became the basis for Chemvet Steel & Fencing.”

Meanwhile CEO Smuts has handed over to Managing Director, Eugene Marais. This change-over took place at the beginning of 2008.

Leader in chicken and pig housing

Chemvet Steel & Fencing has made a mark as a leader in providing farmers with new technology in the design of housing, and upgrading and extensions to housing, for poultry and pigs. This reputation builds on more than 14 years’ experience in the supply and erection of chicken housing.

The company attributes its success in the supply of housing to poultry farmers to two factors: The expertise of Chemvet Steel & Fencing director, Nick du Plessis, who has expert knowledge in the field of animal feeding, breeding and diseses, and the company’s strength in the field of steel and related materials.

In addition to a comprehensive service offering for the steel requirements of poultry businesses, which includes the company’s “DIY-concept”, Chemvet Steel & Fencing recently launched an insulated, dome-shaped broiler house developed with the insulation company, Technopol.

The companies maintain that this new type of broiler house that they have developed in South Africa offers about 16% more weight per square metre, as well as better food conversion rates.

The dome-shaped houses combine a high level of insulation with a top-of-the-range management computer system.

Nuway, as the new concept is called, was tested on four houses for 40 000 broilers each that were built on a farm at Nigel on the South African highveld. The farm was acquired for this purpose as part of the R16-million Nuway development project.

The Nuway concept employs polystyrene in the broiler house walls, which are made of concrete with a polystyrene backing applied in a panel on the outside. The dome-shaped roof, based on mechanically rolled Ipe-beams, consists of arched polystyrene tiles sandwiched between PVC roof sheeting. PVC is used instead of metal to eliminate the heat radiation inside the roof, but also because the white plastic sheeting reflects radiation.

A computerised management system, whereby ventilation and temperature is computer-controlled from the control rooms, is a key feature of the Nuway system.

Chemvet Steel & Fencing considers the main advantage of the Nuway housing to be an increase of about 16% in the amount of kilograms per square metre that the houses afford. This is believed to achieve about 43-43,2 kg – rather than about 36-37 kg – per square metre.

Chemvet Steel & Fencing entered the limelight in the poultry housing industry in February 2003, when the company built the first environmentally-controlled chicken house for Lelievlei farm in the Wolseley district.

The Chemsmooth house was the first smoothfinish ceiling house, said Smuts. This highly advanced ceiling increased ventilation efficiency and reduced the risk of infestations due to the highly cleanable surface of the ceilings.

The Chemsmooth system allows 100% control of the environment, with temperature, lighting and ventilation again controlled through a centralised computer system for each breed housed, said Smuts. Business advantages of the Chemsmooth environmentally-controlled houses included most efficient feed conversion, increased energy efficiency, improved management systems, and a decrease in labour required.

Prominent names among Chemvet’s clients in the poultry industry in South Africa are Rainbow Farms, Supreme Chickens, Daybreak Farms and Spiff Chickens. Projects are run throughout Southern Africa, including in Botswana, Zambia and Namibia, as well as in Nigeria and Kenya. Chemvet’s activities outside of South Africa include service and product delivery to Hybrid Poultry in Zambia, Kenchick in Kenya, and Ritchmark Poultry in Botswana.

“We are highly optimistic about the poultry industry throughout the world and the impact that our range of chicken houses can have on the bottom-line profits of the poultry farmer,” Du Plessis has said.

Other projects with which the company has been involved include Tswana Pride in Botswana, Remote Sites Solutions in Mozambique, Echard Waldschmidt in Namibia, John Sangwa in Zambia, and St Patricks in Nigeria.

A field in which Chemvet Steel & Fencing is seeing increasing application for its services on the continent is wildlife, as both economic opportunities and environmental benefits are becoming apparent in the use of wildlife resources in Africa as opposed to livestock production.

The result has been greater demand for the company’s expertise and products in steel and fencing in the growing and lucrative industry of trophy hunting. Smuts points out how the trophy hunting market is developing alongside increasing turnovers being obtained for wildlife game auctions and a growing awareness of the conservation benefits of trophy hunting. Such developments have been highlighted by J du P Bothma, writing in SA Jagter.

The industry of trophy hunting, of large and rare game animals especially, demands extensive areas of land that are well-managed, said Smuts. Chemvet Steel & Fencing’s products and services that include all types of game and security fencing catered ideally for such an application, he added.