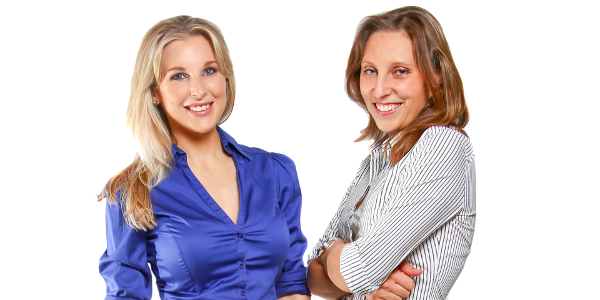 Moira Johnston (left) and Nicky Rosin (right) are the founders of EventRoom, an easy-to-use online marketplace where users can shop for both commercial and private event venues.

When Moira Johnston attended a baby shower at her friend’s mom’s house in Somerset West (near Cape Town), she thought it would be the perfect venue for her upcoming 30th birthday. It had a beautiful backyard with a large fire pit and swimming pool. Johnston would have happily paid to use it, but didn’t feel comfortable asking. And with commercial venue spaces costing thousands, she wished there was some place where she could shop for unique home venues like this.

That is when the idea hit her: what if there was an online portal that allowed people, like her friend’s mom, to list their private venues for events?

“I thought that would actually be a really good idea. It’s like Airbnb but for event spaces, and I was sure there were people willing to do this because they want to make money and everyone has a bond to pay off.”

She approached her sister, Nicky Rosin, with the idea and the duo started conducting some market research.

“Through talking to potential customers we realised that there is actually a much broader market for it – hotels, restaurants, bars, art galleries, boats, yachts, everything you could imagine. We found they were all interested in listing as an event space,” said Johnston.

By end of May 2015, the sisters launched EventRoom, an easy-to-use website where both commercial and private venue owners can list their spaces. Its first listing was Winchester Mansions, a popular hotel along Cape Town’s Sea Point Promenade, and today the site has over 420 listings across South Africa – from wine farms to private beachside mansions to conference centres to lighthouses.

Johnston even got her friend’s mom to list her house. “She had a booking very soon after,” she recalled.

Plans in the pipeline

EventRoom is currently a free service for venue owners, as the founders wanted to encourage as many listings as possible. Once its value has been proven, Johnston and Rosin will look at implementing a subscription or commission-based revenue model, and have started talking to clients about what would work best for them.

The company has also partnered with an event planning company to allow users to easily organise other aspects of their event through the portal.

“So if you want the [event planner] to find a DJ and a venue – they can do that. Or if you want them to organise everything, they’ll do that too. And we share the commission,” explained Rosin.

There are a number of other affiliations in the works. The sisters are in talks with an insurance company that can offer venue owners event liability coverage when a booking is made. They are also looking into a partnership with a cleaning service to both prepare venues for events and clean up afterwards. And to ensure that users get what they asked for, EventRoom is in the process of implementing a ratings and reviews system.

Johnston (31) and Rosin (33) have big dreams for EventRoom, and their backgrounds in law and accountancy bring valuable expertise to the table. Johnston also has prior experience in entrepreneurship, having launched an online marketplace for legal services, LawyerUp, about a year and a half ago.

Over the next five years the sisters hope to expand EventRoom to two or three other African countries. But right now they want to consolidate their position in South Africa and grow sustainably.

“We are both very firm believers in the lean start-up mentality,” noted Johnston. “We work from home and I don’t foresee us getting offices any time soon, just because we feel like they are such a waste of money – especially if you have a house that’s centrally located. All we really need is a phone line, internet access, a desk, laptop – that’s it. Once we are making more money, then it is a different story. But I feel that in these beginning phases you should just keep your burn rate down as much as possible. And that’s kind of what we have done.”

Both Johnston and Rosin were advised against going into business with a sibling, as entrepreneurship is stressful and some said it would place a strain on their relationship. But the duo believe being sisters and business partners has its advantages. For starters, they already know how to fight with each other.

“As founders and start-up partners, you are going to go through trials and tribulations and you are going to fight… If there is no pre-existing relationship between founders, [they might] walk away when they hit a hurdle,” explained Johnston.

“Whereas family or friends are much less likely to just throw their hands up and walk away.”

They both agree that the biggest lesson learnt so far is to be careful with whom they enter into a business partnership, and always start with a trail run.

“We have had a lot of issues in the past with people we have worked with because people over-promise and under-deliver,” Johnston explained. “So the biggest lesson has been to always do a trial run before entering into a formal relationship.”

And their advice to others with a fresh idea and no clue where to start?

“Test your theory,” encouraged Johnston. “You have a hypothesis where you think there is a problem you can solve. Now go out into the market and speak to your target audience to find out what they think.”