Few would argue that football is not the most popular sport in Africa. However, the beautiful game could soon face some competition from the National Basketball Association (NBA) that has upped its efforts to grow the popularity of the sport and to boost support for NBA teams such as the New York Knicks and the Los Angeles Lakers. 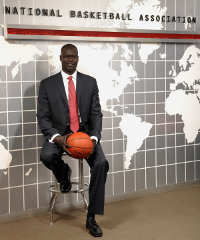 In 2010 the NBA opened its first African office in Johannesburg. The man they recruited to lead the league’s operations on the continent is Senegalese-born Amadou Gallo Fall, who previously worked for the Dallas Mavericks as director of player personnel and vice president of international affairs.

Fall’s mission is to develop basketball on the continent. He has identified five priority countries – South Africa, Kenya, Angola, Nigeria and Senegal – where the NBA’s initial efforts in Africa will be concentrated.

“We see that there is tremendous potential for the sport, but there are issues related to accessibility that we need to first find a way to address. So we are going to focus on the grassroots level to grow the sport, working with relevant stakeholders to build the infrastructure, because you need some basic infrastructure in order for children to have access to courts. And also train local coaches who can teach the game. And just to make sure the games are an attractive product to see, and kids that want to play have access to it,” Fall told How we made it in Africa in a telephonic interview.

The biggest partnership to date is the Royal Bafokeng NBA Development Programme in the North West province of South Africa. Since the launch of the programme in May 2011, more than 8,000 children have been introduced to the game; 18 refurbished and new courts have been built; three full-time coaches trained and appointed with 40 more in training; and it’s been introduced as a sixth sporting code at schools within the community.

Fall has also negotiated a television deal with South Africa’s public broadcaster, the SABC, to air NBA games as well as a basketball lifestyle show. “A big part of the strategy is to increase our television footprint. It is one thing for young people who want to play to have courts and the relevant equipment they need to master the sport, but at the same time it is important to allow fans in general to be able to view NBA games, just like the rest of the globe.”

Like most sports these days, the NBA is big business. Its players are among the top paid sport stars in the world, while teams generate money from ticket sales, television contracts, merchandising and sponsorships.

As we speak over the phone, I try to find out whether the NBA’s new focus on Africa was because it sees the continent as a source for future revenues. After all, Africa’s much touted growing middle-class can surely mean money for the NBA in one way or another.

“We are looking to form marketing partnerships with brands that see their goals and aspirations aligned with ours. Ultimately there is a commercial aspect that we would pursue in time, but at this initial stage I think it is more about growing the sport, increasing our fan base…” said Fall.

Fall also sees commercial potential in mobile and merchandising. “TV is always important because you expose your product to a bigger number of viewers, but we are looking at areas such as the digital realm. Obviously we all understand how big the mobile penetration is in Africa. Merchandising is another area that we see as an opportunity for growth.”

There are also plans to hold exhibition games. “But ultimately also we want to bring out big events to engage with our fans… One of our goals is to have two NBA teams come to an African capital and play exhibition games like we do in London, Istanbul, Shanghai, all over the world. These are the goals, and we are working towards that and making tremendous progress…”