When Sean Garstin retired in 2007 after decades in the car industry, his first instinct was to start his own car dealership. Today, he runs Sean Garstin Motors in Nairobi, Kenya’s capital, a company that imports and sells used cars. 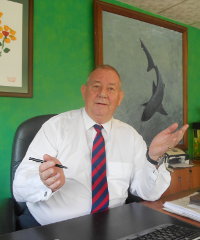 Born and raised in England, Garstin moved to South Africa in 1968 to farm apples. He had planned to return to England after a year, but instead chose to stay in South Africa where he took up a sales job at a car dealership because he “liked cars”, he says.

This marked the beginning of a long career in the industry, selling some of the world’s leading auto brands. “This is fun. I love doing what I do. I woke up at 5am this morning to buy a car in Japan,” says the 70-year-old entrepreneur.

Sean Garstin Motors imports cars from Japan and England and the firm’s target market is Kenya’s elite customers. “Our target market is a lot of mzungus (white foreigners), well to do Africans and the odd Asian. There is a huge mzungu market here,” says Garstin.

Last year the dealership sold 116 cars and Garstin expects the number to rise to 125 this year.

Garstin attributes the success of the business to honesty and building the brand around him rather than cars. “I don’t advertise cars, I brand myself. I have 44 years of experience. I am very straight and honest. I don’t work on big profit margins. My profit margin is between 10% and 15% before I pay tax,” says Garstin. “I have never had to take a car back. I have never had an unhappy customer.”

Despite the growing popularity of online platforms on which people can sell and buy cars, Garstin believes his business is under no threat. Online platforms, he says, come with a lot of risks. He says some websites are run by crooks and advertise stolen cars. “The real hidden disasters hang in there [buying online]. The dishonesty is terrible. [In business] honesty is more than important, it is critical,” he says.

According to Garstin, Kenya’s second-hand cars industry is thriving due to increasing incomes and people’s aspiration to keep up with the Joneses.

“Kenya is a pretty wealthy country. In the last 20 years it has grown enormously. People’s salaries have gone up over that period of time [and] the standard of living has increased.

The increasing demand for cars has encouraged more dealers to import vehicles. “We’ve probably got two year’s [worth of] stock in Kenya, most of which is not turning around. Kenya is a dumping ground because of dishonesty in our customs [department]. I would think up to 80% of used cars in Kenya are not what you think they are.”

Some of the challenges players in the industry face include corruption at the port in Mombasa and fraud. “A few people have tried to crook us a couple of times and we have had a few forged banker’s cheques,” says Garstin. “We haven’t had a lot of theft in the port recently. It used to be a lot, but it is getting better.”

Garstin says doing business in Kenya is exciting. “I love it here. It is very exciting. People are great. I am [now] a Kenyan citizen.”

The most important lesson he has learnt in the car business is to treat customers with respect. Garstin tells a story from his days as junior salesman working at Chrysler in Cape Town, some 40 years ago. One day a young black man arrived at the dealership on a bicycle. He walked into the showroom, but was ignored by all the staff, except Garstin. The man asked about a pickup and whether he could pay cash. When he left the other salesmen laughed at Garstin, but, the next day, the customer returned with a plastic bag full of money. He turned out to be the owner “of all the fish shops in a huge township”, says Garstin. “That gentleman loved cars. He ended up buying seven cars from me. Never judge a book by its cover.”

Garstin advises entrepreneurs to calculate their finances and have good relationships with stakeholders such as banks, insurance companies and other service providers. “You can’t do things without money,” he says. “I started with KSh 1m. I couldn’t buy my own stock to start with. I was buying stock for other people. The first year was very difficult. Now my cash flow is fine, I can afford to buy my own stock. Finance is critical.”

To be successful, you must also have good staff, Garstin says. “Your staff can make or break you. Research shows that about 60% of the staff in a company are stealing from you and of the other 40%, about half are planning how to do it. That is a fact, doesn’t matter if it’s a pencil or car oil, it is something,” he says. “I have got one guy I know is stealing from me. I nearly caught him the other day.”

Garstin advises entrepreneurs to exercise caution and be honest in their dealings. “Be honest, be dead honest. In fact, be over-honest if you like. That is what people deserve, I think.”