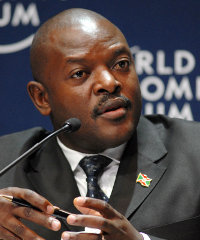 Burundi’s President Pierre Nkurunziza has been sworn into office for another term. He was re-elected in the country’s first presidential direct-vote election in late June, while the opposition boycotted the poll, claiming massive fraud and intimidation by the government in previous legislative and local-government elections.

Up on a hilltop overlooking vast green countryside and countless rolling hills, 28-year-old Suleyman Aronge sways from side to side beating a traditional Burundian drum. He and about 20 others are wearing tunics colored red, green and white – the colours of Burundi’s flag.

Aronge voted in the elections despite fears by many of a terrorist attack. The Somali militant group al Shabab promised to target Burundi next after taking credit for the deadly bombings in Uganda on 11 July that left 76 people dead. But Aronge, who lives in Burundi’s countryside – like the majority of the country’s 10 million people – said he was not afraid to vote.

Uganda and Burundi both have a few thousand troops in the African Union peacekeeping force in Somalia. Aronge says Burundians think their army is able to stop those attacks. “We are confident in our army,” he said, but “we hope such an attack will never happen in our country”.

Another challenge the country faces is ethnic division. A 13-year civil war between Hutu rebels and the Tutsi-controlled government ended in 2006, but left about 300,000 dead. About 86% of the population is Hutu. The rest are mostly Tutsis.

In Burundi’s capital, Bujumbura, 22-year-old student Gloria Kaneza said she does not like to think of people along ethnic lines. She is a Tutsi and is going to marry a Hutu. “So me, I cannot judge someone because he is Tutsi or Hutu because there are Tutsi who are not so good. There are Hutu who are not so good. You can judge someone by his actions, his heart, what he are doing. Me, I do not like the expression that I am Tutsi or I am Hutu because it makes barriers.” She also said discrimination between the two ethnic groups still exists, but with peace now, she said her country will be “very beautiful” in the future.

Jacques Mafarakura, a 55-year-old museum curator in Gitega, agrees, saying life has never been better in Burundi. Mafarakura says if you look at the way people live, they produce more wealth than they have in the past. They have more, he said. Although it is not obvious, he claims things have improved. When you are walking in the street, you can see that things are slightly better, he added.

Things could get even better now that Burundi and four other nearby countries started the East African Common Market in July. It allows people, goods, and services to travel across borders with less taxes and less red tape.

For Elias Dina, that is good news. The 29-year-old sells phones and phone covers in Burundi. Dina said the Burundian economy is not as bad as before because the country has its own products, like rice, that are good at the moment. He added that now that east Africa has come into play, Burundians will have good things and cheap stuff, too.

The International Monetary Fund expects Burundi’s economy to grow by nearly four percent this year, mostly thanks to its production and export of coffee and tea.

In July, however, Transparency International named Burundi the most corrupt nation in East Africa, with a corruption prevalence of nearly 37%. Burundi’s revenue authority and police force topped the list of most corrupt institutions in the region.

That is a problem for salesman Dina, who said corruption is everywhere. “It is alive here, it is going on,” he claimed. “There are things that come into the country without paying taxes.” He said sometimes if the police catch someone, they do not take the person straight to the police station, they just sort it out on the streets.

An opposition party leader, Jean de Dieu Mutabazi, agreed that corruption is a serious challenge for the country. His party boycotted the recent elections, but said the opposition groups need to help build a “strong Burundian society”.

“The problems will be from now on,” Mutabazi said, “since the ruling party will have all the power and they will have the tendency to dictate everything to the people.” The opposition is weak, he added.

The president of the ruling party, Jeremy Ndikumana, though, said the political environment in Burundi is improving. “The democracy in Burundi is now taking place, slowly of course. We are in the beginning, but we see that we are going well.” – VOA