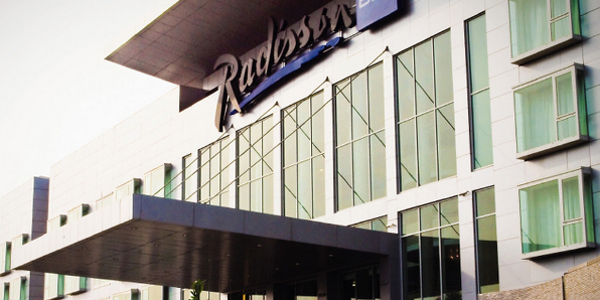 The Radisson Blu in Lagos, Nigeria

“For some of these economies that are in a downturn right now, it is actually the right time to get into the market – at the bottom of the cycle, not the top.”

So says Andrew McLachlan, Carlson Rezidor Hotel Group’s senior vice president of business development for Africa and the Indian Ocean. The hotel operator – which owns the brands Radisson Blu and Park Inn – launched its first African hotel (a Radisson Blu in Cape Town) in 2000. It has since expanded to 29 countries on the continent.

According to McLachlan, the group hopes to grow to 15 hotels in Nigeria by the end of 2020 – from the two that it is currently operating. Hotel brands targeted at the west African powerhouse include Radisson Blu, Park Inn, the luxury five-star Quorvus Collection, as well as its new hotel concept, Radisson Red, which is aimed at a millennial mindset.

Nigeria’s economy has been struggling since the downturn in global oil prices – mainly due an overvalued naira and shortage of foreign currency. A fall in investor confidence has translated into a drop in FDI. But McLachlan says Nigeria remains its second key market on the continent after South Africa (where it plans to grow its 14 hotels to 20 by the end of 2020).

“When you go into the hotel sector it’s a long-term play, not a short-term play. So you look at the long-term fundamentals.”

Outside of South Africa and Nigeria, McLachlan said the group has identified “pro-active countries” – where it sees potential to operate about five hotels.

“So we might not go into the depths of those markets but we think there are probably at least two locations within each country where we could have a couple of our hotels under at least two of our brands. These would be Ethiopia, Kenya, Tanzania, Mozambique, Angola, Ghana and Algeria. We think in those markets we can have at least five hotels each.”

A key part of the company’s strategy is focusing on economic regions – such as the East African Community (EAC), the Economic Community of West African States (ECOWAS), and the Southern African Development Community (SADC). Here the operator aims to have a hotel in the commercial hub of each market to cater to regional business travellers. For example, ECOWAS covers 16 countries, of which eight share the same currency, the CFA. Many of these markets are small, and there is not much demand for Carlson Rezidor’s hotel brands outside each country’s main economic hub.

“So we create a business circuit within ECOWAS, where we say we would like to have a hotel in Cotonou, which is the financial hub of Benin, as well as a hotel in Lomé (Togo), Abidjan (Côte d’Ivoire), and Freetown (Sierra Leone). And we start developing a business circuit within west Africa and one within the upscale segment. So we develop a Radisson Blu first in each of these financial hubs and if the market is developed enough then we follow with a Park Inn by Radisson,” he explains.

“And we do exactly the same in the EAC. Again, because it is a community that has free trade and free movement, we will develop a business route within that community because you might find that the same person from Deloitte, as an example, who is based in Nairobi (Kenya), is actually servicing Kampala (Uganda), Kigali (Rwanda), Bujumbura (Burundi), Arusha and Dar es Salaam (Tanzania) too.”

Typically, Carlson Rezidor enters a market with its upscale Radisson Blu brand first – mainly because the group finds that many African cities need to be more developed before it becomes feasible to launch a mid-scale brand like Park Inn. For example, to launch in a city like Kinshasa (DRC), the group would have to ensure there is a water treatment plant, sewerage, diesel generators, as well as facilities like a bakery, butchery, laundry and dry-cleaning to adequately run the back-end of the hotel. As a result, it can cost the same to enter a market with the group’s upscale brand as it does to launch with its mid-scale offering.

Carlson Rezidor’s other two brands that are being targeted at Africa are Radisson Red and Quorvus Collection. It is expected to open its first African Radisson Red hotel in Cape Town in September. The brand – which emphasises art, music and fashion and has a modern, minimalist design – is likely to launch in other South African cities, such as Durban, Johannesburg and possibly Pretoria. McLachlan says he also sees potential to launch the brand in Nairobi, Lagos, Abidjan, Dakar, and Luanda.

“And that is probably as far as it’s really going to go at this stage, because outside of those markets there isn’t a customer base that will really understand the brand.”

Its Quorvus Collection is also only being targeted at a handful of countries. “Probably just 10 markets in Africa – like your bigger, traditional capital cities. So we see it going into Pretoria, possibly Cape Town, Addis Ababa, Nairobi, Abuja, Abidjan and Luanda, probably, as well,” he adds.

“And then it is also going into the Indian Ocean island resort offering, where we are offering a luxury beach resort.”