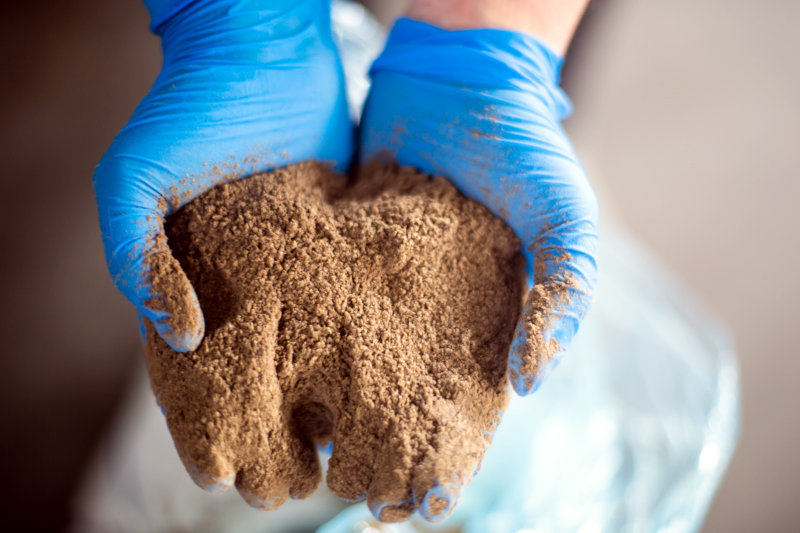 Insects are dried and powdered to produce EntoMeal, which is used in pet, poultry and aquaculture feed.

In 2018, economics graduate Simon Hazell co-founded the South African insect protein company Inseco with Jack Chennells. Its core business is to use black soldier flies to convert low-value organic waste into insect protein, oil and fertiliser. Jeanette Clark spoke to him about the challenges of fundraising, plans for expansion and convincing the world to use insect protein.

Hazell became aware of the sheer volume of organic waste that was produced after spending some time with a friend who worked in the wine industry. “I wanted to understand what was available to manage this food waste and discovered composting and landfilling were the main solutions,” he says.

Research highlights the rise in organic waste generated worldwide as an emerging threat to human health, biodiversity and the ecosystem. Some of the dangers include contamination of water, air and soil, as well as the spread of harmful pathogens. Simply sending the waste to a landfill also contributes to greenhouse gas emissions.

Hazell’s research on how to deal with the problem differently brought him to the black soldier fly, an insect originally from South America but which is nowadays found in various parts of the world. It can consume waste of around 70% its bodyweight daily, providing a compelling business case for waste management, considering the products that could be manufactured from the process.

Inseco kicked off with a pilot project in 2018, using personal savings and a few small grants. “In the pilot phase, we focused on understanding the inputs – the organic waste – where it came from and how it was transported. This has given us a good grasp of the supply chain around food waste,” says Hazell.

The company studied the biological process of using insects, more specifically black soldier flies, to upcycle the organic waste into various insect products. “We tested it at a rudimentary level, but it did give us some data to generate a financial forecast of what a bigger factory could do.”

Finally, Inseco had to find a market. Initially, they took samples of the live larvae of the flies to local poultry farmers to ask whether they could feed them to their flock.

“The initial response was one of hesitance. People said they wouldn’t feed maggots to their free-range chicken and fish, and we would respond with the question: ‘What do you think they are currently eating?’,” laughs Hazell.

Over time, the founders felt that there was a compelling opportunity worth exploring, and searched for a larger factory and additional funding.

Fundraising for a unique industry

In the beginning, Inseco covered its research, development and operational costs with money from angel investors. “It was largely about who we knew; our network that was willing to take a risk on the business, but even that was difficult,” reveals Hazell. “We had to show our first funders the return they stood to make.”

Hazell and the team raised the money incrementally. If the company needed R100,000, for example, it asked for only R30,000. Once that was secured, the team approached the next funder, showing that 30% had already been committed. “Crucially, this built momentum; it created a sort of competitive tension.” 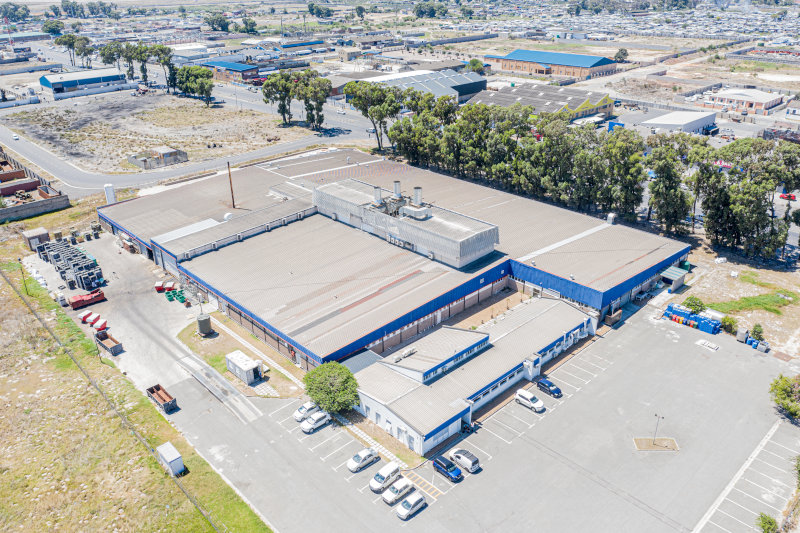 With the angel investments onboard, the company was able to take over a state-of-the-art 10,000m2 factory in Philippi outside Cape Town, from AgriProtein, which was a subsidiary of the UK company Insect Technology Group, after the latter went into administration in late 2021.

Inseco then had to raise funding to expand its team and increase manufacturing capacity from the plant.

“Fundraising for a biotech company such as ours – one that has physical assets – is really hard. Banks are risk averse and venture capital companies typically like funding software businesses. We also needed more initial capital just to prove the business case in comparison to what is required for the minimum viable product for a digital tech company,” Hazell comments about the funding round.

In April 2022, the company announced it had secured US$5.3 million. The round was led by Futuregrowth Asset Management’s Development Equity Fund, with participation from E4E Africa and Philippines-based Oakdrive Ventures. This will be used to further increase production, for ongoing research and development and to expand into the export market.

The company currently has capacity to produce 100 tonnes of insect oil and defatted insect meal per month. These are sold under the brand names EntoOil and EntoMeal; the ‘ento’ is derived from entomology.

Inseco is also scaling up production of the organic fertiliser EntoSoil; it provides EntoEggs to up-and-coming black soldier fly farmers; and is experimenting with the business case for EntoChitin, a polysaccharide that is finding emerging use cases as a food preservative and in the cosmetic and pharmaceutical industries.

The organic waste is delivered to the factory from suppliers like packhouses in large volumes and goes through a treatment process so that it can be pumped into containers. The larvae are added afterwards.

The larvae work through the food in approximately 10 to 12 days, breaking it down completely.

“What is left are the mature insects and the frass, the organic fertiliser, which we sell as EntoSoil to farming clients for crop production,” adds Hazell.

Some of the larvae are dried as is for NutriGrubs and used as an animal feed. The rest of the fully grown larvae go through the next processing step, where the fat content is pressed out to produce the EntoOil. The defatted insects are then dried and powdered into EntoMeal, used in pet, poultry and aquaculture feed. The oil is an alternative to fish-, coconut- or palm oil, for human food and animal feed applications. 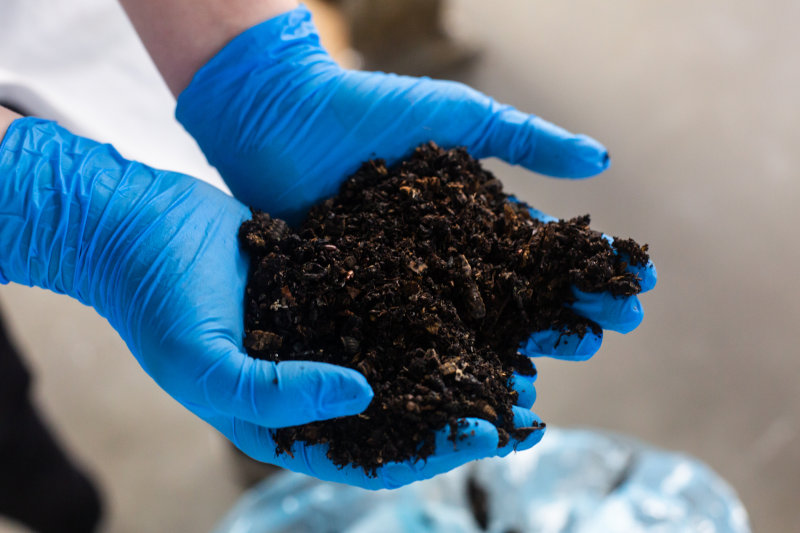 Inseco is seeing growing demand for its organic fertiliser, partly due to the Russia-Ukraine war.

Growth potential across the board

While the protein powder and oil are currently considered the flagship products, Hazell is upbeat about the growth in demand for EntoSoil. “Owing to the current Russian-Ukraine crisis, the export of chemical fertiliser has dropped significantly. Coupled with the supply chain issues the world is experiencing, the price of inorganic fertiliser has shot up and organic fertilisers are now an appealing alternative,” explains Hazell.

Recently, the company has seen rising interest in its EntoSoil fertiliser. “The chitin it contains acts as a biopesticide. We have found that, if applied in particular ratios, it reduces the prevalence of certain diseases. It also means a farm can classify its produce as organic, which boosts unit prices.”

Hazell also believes the growth potential for the oil is promising. “We’ve done several tests with big manufacturers and the palatability of the oil is up to 30% higher than conventional products, which makes it perfect for inclusion in fish, pet and livestock feed. While we originally thought the oil would be a low-value product, it is turning out to be anything but.”

“You can’t win the league unless you win your home games,” says Hazell of the company’s initial domestic focus. Inseco’s primary South African customers are poultry or fish-farming operations. Discussions are underway with various other agricultural producers.

The company is hoping to start exporting in July. “There is plenty of international demand for the protein and oil, specifically for use in pet food.”

Inseco’s products also have applications aimed at humans, whether in medicine, cosmetics or as a nutritional alternative, according to Hazell.

“I believe it is an incredible protein source. I exercise and occasionally need to take something to aid recovery. I cannot consume whey protein because I am lactose intolerant, so this is a great alternative. It tastes nutty, almost like Horlicks.”

Insect protein is already being consumed by humans on a significant scale in Africa, Asia and South America. According to Hazell, these consumers are used to their own insect protein sources – such as worms or locusts – and to sell them protein from a source such as black soldier flies would be difficult.

However, “in the West, consumption of insect protein is still unusual. It is an emerging sector that we’re currently exploring with a few local and international partners,” he says. “Although, we think widespread adoption is still a few of years away.”