In 1994 Tanzania-based British-born entrepreneur George Theobald saw an opportunity to start a tea processing company in the East African nation. At the time there was only one local tea processor and the government was set to deregulate the domestic tea market. 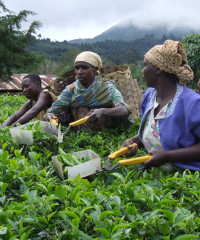 Theobald teamed up with Joseph Mungai, a prominent Tanzanian businessman, politician and former minister for agriculture, to set up Tanzania Tea Packers (Tatepa) to process tea for sale in the domestic market. They identified an industrial site, raised US$200,000 of their own money and got additional financial support from development institutions and venture capital funds.

In 1995 Tatepa launched its first product branded Chai Bora (Swahili for “high-quality tea”). The brand was widely accepted in the market and in its second full year of operation, Tatepa made profits in excess of $700m.

“Tatepa was a very successful start-up, and I’m delighted to say it made good money for our investors,” says Theobald. Kenyan investment firm TransCentury acquired Chai Bora from Tatepa in 2008. By that time Chai Bora was the largest tea brand in Tanzania with a 55% market share.

After that disposal, Tatepa ventured into new ground with its investment in avocado and tea blending businesses. When it launched Rungwe Avocado Company (RAC) in 2010, Tatepa co-founder and chairman Mungai told shareholders avocado is a more profitable agricultural commodity than tea.

Theobald tells How we made it in Africa the company sees opportunity in the avocado business citing demand in Europe. “The two big growth sectors for Tatepa are primary avocado and the blended and packed tea segment,” he explained. “We have our own avocado fields and also buy from smallholder farmers. Our first target is 1m kilos of avocado next year, building to 5m kilos over the next few.”

Tatepa is still active in the growing, processing, blending, marketing and distribution of tea through its subsidiary Wakulima Tea Company. In 2012 it introduced a new brand of blended tea, Chai Tausi, which is now the third-largest tea brand in Tanzania.

Theobald attributes part of the success of Tatepa to making it a public company. In 1999 it became the third company to list at the Dar es Salaam Stock Exchange (DSE). This move gave it wider access to finances to fund its growth.

“When you list you open yourself up to much easier access to cash. We expanded by buying big tea estates, we got into smallholder tea production and avocado production. It allowed us a much higher profile,” says Theobald.

He explains the decision to list at the DSE was guided by the founders’ interest to involve more people than the two of them in the business. “We floated at Tsh.330 per share and the current price is about Tsh.650, almost double. So people who invested originally have made good money.”

But Theobald concedes it has been a challenging journey. In the early days particularly, access to capital was a hurdle. And he cites changes in government policies that are impacting the agriculture industry in Tanzania as one of the major concerns at the moment.

“For example new quasi government bodies coming in demanding fees is an issue which of course affects primary agriculture. We are also not sophisticated yet in our port infrastructure so exporting is still a challenge, especially for fresh produce like avocado.”

To be successful in business in Tanzania, Theobald notes it is vital to have a good grasp of what one is doing and understand the market. “You have to have local knowledge and local partners. You really do need to know what you are doing.”