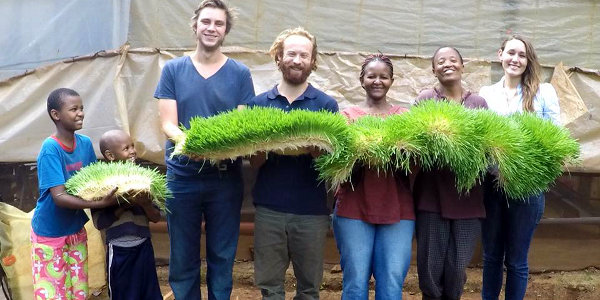 Graham Benton is founder and managing director of LishaBora Hydroponics, a Kenya-based start-up that produces a barley nutrient supplement targeted at smallholder dairy farmers. LishaBora operates a greenhouse system where it grows barley seeds using nutrient-rich water. The end product, a fodder mat that looks like grass, is fed to cows as a replacement to nutrient concentrates. The product is said to improve milk yields by up to 30%.

Benton tells How we made it in Africa about his solution to some of the challenges smallholder dairy farmers face, and the lessons he has learnt in business. Below are edited excerpts.

1. Tell us about your start-up.

LishaBora is a hydroponic feeds production company that targets smallholder dairy farmers in Kenya. We sell them high quality nutritious fodder in order to supply the nutrients and proteins needed for cows to produce more milk. Smallholder farmers make up the vast majority of dairy farmers in Kenya and most struggle to make a living off their cows. The cost of feeds is prohibitive, plus the quality of feeds they buy is also really poor.

Some farmers will buy bags of concentrates that are mixed and fed to cows to provide the required nutritional content. However, most are not aware of the required ratios for mixing concentrates – hence there are inconsistencies. They also usually don’t know the exact nutrients and minerals their cows need.

As a result, dairy farmers generally record low milk volumes. Our hydroponic fodder can increase milk production by up to 30% over current feeds, while also reducing expenses for farmers.

We target farmers who generally own one to 10 cows and produce less than 10 litres per cow. When they start using our fodder they immediately record an increase in milk production as well as lower costs because they no longer need concentrates.

We produce the hydroponic barley fodder at our greenhouse system in Kiambu, Central Kenya. We source barley seeds from farmers in the neighbouring environs. After germinating and growing the barley seeds in our greenhouse, we get a final product that is a fodder mat that looks a lot like grass. We make deliveries daily to milk collection and distribution centres so the farmers both drop off their milk and collect the fodder. Daily deliveries are beneficial because then the fodder is fresh.

We tried making bulk deliveries and realised farmers typically wouldn’t store the fodder well, and others would feed it to pigs and chickens – and in the end the cows wouldn’t get the required nutrients. This was stopping us from actually having impact and increasing sales. So we decided to monitor the usage closely because it would be an unfortunate reason for a company to fail because its customers are not using the product properly.

2 . How did you finance your start-up?

I started with US$10,000 of my own money, then I asked my family for some money, and asked my friends for more. We got early stage funding and human capital from Engineers Without Borders Canada. I also have four small private investors who gave money to get us going. Additionally, we recently received a $20,000 grant from the Kenya Climate Innovation Centre.

I don’t think I’d do anything differently for the next four months. We’ve got funding right now to carry out our project for that period. But after March or April, we’d be scaling up the project to go to four new sites – and that’s where we could use the money. We are looking to get about $150,000 to $200,000 to get us through 2016 and that is given we make our revenue targets. From there we would scale up again to get 50 systems on the ground by the end of 2017.

There are some internal and external risks. Internal risks include us not growing a high enough ratio of fodder to seeds, or we don’t develop a product that fits the market well. But these are things we can manage.

The external risks are a bit more concerning – things like corruption and potential difficulties sourcing the barley. Some people say competition could be a risk, but I don’t really see anyone doing this until LishaBora is very successful.

5. What has been your most successful form of marketing?

Word of mouth. If you have something exciting, interesting and innovative, people talk about it. In the rural areas people talk to their neighbours all the time. One satisfied farmer will speak to five others. We have also been working with farmers’ groups and cooperatives, which has proven valuable because they have huge networks of farmers we can tap into.

When people pay for my product. When I signed up my first customers and they started paying and picking the fodder it was really exciting. It was a great feeling.

7. Tell us about your biggest mistake and what you’ve learnt from it.

If I could go back, what I’d do differently is do things slower. I’d do more incremental work. I tended to jump the gun, poured hundreds of dollars into building things and not really testing them well. I think testing things better and going slower at the outset would have allowed me to use the funds I had in a more efficient way.

I also made the mistake of not doing market research in the area we set up our system. I did not talk to farmers, and as a result, we now transport our products much further every day. We only realised after setting up that many of the farmers around us are doing dairy farming as a hobby, whereas we need people who think of it commercially and want to improve both yields and income from dairy farming.

Through this journey I learnt there are many ups and downs. Sometimes you run out of money and even start to think about quitting. There have been multiple times when I really thought it’s not going to work – and even talked to people about giving me employment.

But I have learnt you just have to wait, be vigilant, be persistent and exhaust all your options. Until you have done all that, you really shouldn’t consider failure.