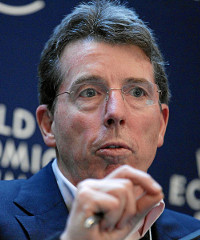 Diamond last year teamed up with celebrated 32-year old entrepreneur Ashish Thakkar, founder of the diversified Mara Group, to form Atlas Mara. The duo hope to build “the leading financial services organisation in Africa” and has so far announced investments in Botswana-based financial services company BancABC and the commercial banking subsidiary of the state-owned Development Bank of Rwanda.

African banks have been notoriously hesitant to finance small businesses, but Atlas Mara wants to change this and sees an opportunity in lending to entrepreneurs and consumers.

Diamond told delegates in Nigeria’s capital Abuja that a growing private sector will have positive spillover effects on Africa’s development. “The single most important thing we can do is to help foster private enterprise,” he says.

“One of our messages to our investors is that what we are doing here is almost the perfect intersection of doing good and doing well. Our investors are going to do extremely well, but if we are successful in adjusting a business model and creating more finance for young entrepreneurs… it is also doing good.”

Support from US investors

Although the US has been accused of being slow to seize the opportunities on the continent, American-born Diamond says the biggest chunk of Atlas Mara’s funds came from US-based investors.

However, he says this was the first time most of these investors committed money to Africa.

In December 2013, Atlas Mara raised US$325m through an initial public offering on the London Stock Exchange as an Africa focused entity.

Diamond highlights a large gap between perceptions about doing business in Africa and the reality on the ground, particularly from US investors.

Diamond resigned as Barclays CEO in 2012 after the bank suffered heavy fines following revelations that some of its employees had been trying to manipulate inter-bank lending rates. He worked at Barclays for 16 years.

His passion for Africa started through the Diamond Family Foundation, a not-for-profit organisation supporting causes on the continent.

He also gained experience in doing business in Africa through Barclays, which has a presence in 15 African countries.

Diamond says his time with Barclays made him “one of the very few global bankers that really understood Africa and banking in Africa”.

He has gone back to his previous employer to poach John Vitalo as Atlas Mara’s CEO. Vitalo was Barclays’ head for the Middle East and North Africa.

According to Diamond, Atlas Mara has seen “an avalanche of requests” from educated Africans living abroad wanting to come home and work for the company.

“One of the things Ashish and I are trying to do is to rather than being passive investors, [is] to be operators and active investors in a sector where we see so many opportunities… to bring innovation,” he explains.