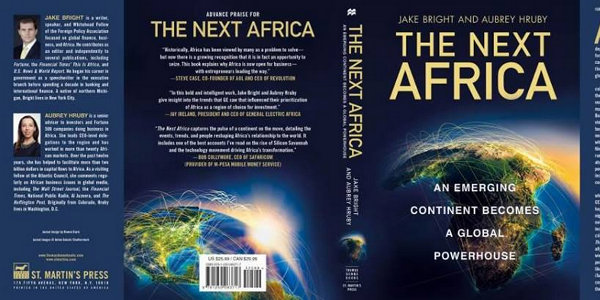 Jake Bright and Aubrey Hruby are the authors of The Next Africa: An Emerging Continent Becomes a Global Powerhouse, a new book highlighting the trends driving Africa’s growing influence in the global economy.

How we made it in Africa asked Hruby about the reasons for writing the book; which US companies have been the most effective in Africa; and in what sector she would invest her money.

1. What have been the main reasons for writing The Next Africa?

We had two main reasons for taking on this important book project. Firstly, for over two collective decades, Jake and I have been connecting US companies and policy-makers to African business and thought leaders. This work has historically been confined to a small Africa business/investment community in the US – a few dozen people mainly in Washington and New York. Our goal with this book is to reach a broader audience and to introduce the varying aspects of the transformation that African countries have been undergoing for the past 15 years – the cultural, economic and political changes underway.

Secondly, we want to challenge the simplistic framing of Africa in the media over the past decades. Because US interests in African countries have historically been narrow and shallow, the continent has been broadly brushed in either apocalyptic colours or blind optimism. We are striving to replace the pundit’s pendulum between afri-optimism and afri-pessimism with a more nuanced view that recognises the inherent complexity in African markets and the uneven nature of rapid economic growth.

2. Tell us about the most challenging part of writing this book.

It was challenging to achieve the right mix of analysis, factual research, personal anecdotes, profiles of prominent Africans and structured thinking in the book. We worked hard to make it accessible to the average American and present the complex transformation of many countries in a way that was interesting and engaging.

3. Interest from US companies to invest in Africa is arguably rising. In your opinion, which American company has been the most effective in doing business in Africa?

US companies doing business in Africa can be loosely divided into two groups – the large multinationals which have been doing business in African markets for decades and smaller, newer companies that believe their technology or product is a good fit for developing countries. In the first category, Coca-Cola has been a real market leader– directly and indirectly employing over 100,000 Africans and innovating down its supply chain. Through initiatives such as the 5by20, ably led by Dr Susan Mboya, Coca-Cola is working to give greater opportunities to women entrepreneurs.

In terms of US smaller companies, Consult Hyperion is working to assist African countries and banks build out financial inclusion programmes. From helping to eliminate fraud in Nigeria’s fertiliser subsidy programme to doing some of the early work on M-Pesa in Kenya, Hyperion is providing cutting-edge approaches to mobile finance and know your customer efforts.

4. From your discussions with US executives, what would you say is the number one factor holding American companies back from investing in Africa?

As we have written in The Next Africa, we believe that one of the main constraints is of a developed market mindset and misperception of risk. US companies often think headline risk – political upheaval, irregularities in the justice system or public scandal – is the main problem in African markets, but the real risk generally is counter-party risk. Choosing competent and upstanding local partners in an environment of lacking data is difficult.

5. If you were given a significant amount of money to invest in an African country/sector, which would it be?

I would invest in African-owned construction companies that will benefit from large scale infrastructure projects, increasing demand for housing and office space, and policies that demand local content be used in the extractive industries.