Yesterday a number of business people in Cape Town attended a conference, hosted by South Africa’s Cape Chamber of Commerce and Industry, to look at market opportunities for South African companies in the rest of the continent. During a panel discussion, an audience member asked how South Africans are perceived by other African business people, which inspired several thoughts on the matter. 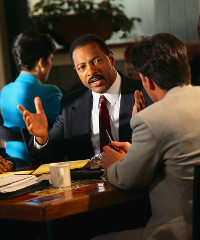 According to a senior manager of WESGRO, Jacyntha Twynam, South African business people are sometimes perceived as too westernised in their approach to business.

“And sometimes we are too arrogant. We just want to go in there guns blazing and ‘let’s do this deal’. Often we first need to enjoy a meal together, get to know one another, before you start talking business [with people in other African countries],” noted Twynam. “So I think that is probably one of the biggest problems.”

“There is a wariness about South Africans and how they do business,” she said, adding that this had been a topic she had brought up with other African chambers of commerce.

African business people are aware that many investors are viewing Africa as a big opportunity, but there is also some distrust that quick deals will be made that will only benefit the foreign company, explained Kausch. “I think a lot of that has been seen in some of the mining deals.”

She advises South Africans to take time to get to know and understand the people they want to do business with, and work on developing relationships and networks. Not only are there over 50 unique countries in Africa but there are also diverse cultures and ways of doing business within borders.

South Africans need to test their perceptions of Africa

Layo Seriki, managing director of management consultancy firm Cielarko, noted that the question of how other Africans perceive South Africans comes up a lot in her line of work.

“And what we try and remind people is that it’s just as important to know how we perceive the people from the countries that we are going into… Because very often we have our minds made up about how people in Angola are, and how it’s going to be to do business in Angola. And we don’t question these assumptions,” said Seriki, adding that South Africans should test these assumptions by spending time in the countries they want to operate.

Twynam stated that South Africans also need to be careful of generalising everything north of South Africa’s borders as the ‘rest of Africa’.

Ruben Richards, CEO of the Cape Chamber, said he is always received positively as a South African when meeting other Africans on the continent. He believes a major reason for this is due to South Africa’s late statesman, Nelson Mandela, and the brand he has fashioned for the country globally.

“That is one of the first ports of call or connections that people have with South Africa. So they see me and say, ‘you are South African, oh yes, Mandela’s country’.”

Richards highlights that this “Brand Mandela” has been good for the country’s reputation. He advises South Africans to engage with other African business people with humility and respect to both continue and capitalise off this positive image that exists in Mandela’s name.