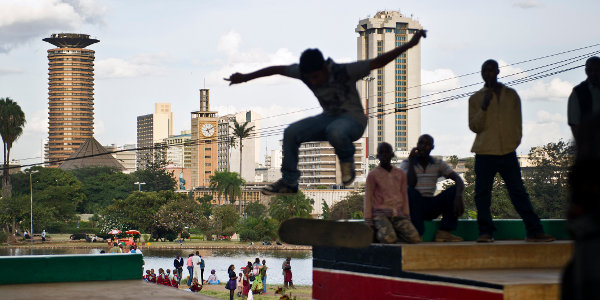 Nairobi, Kenya. A question mark remains over how urbanisation in Africa will play out.

The world is changing at a rapid pace – socially, politically and economically – with much disruption forecast for the insurance sector over the coming decade. South Africa-based insurance company Santam recently hosted an event, called Insurance 2025, where a group of individuals explored the external forces shaping the business environment, and sketched future scenarios that could impact the insurance industry for the period up until 2025.

Here are some of the key drivers of change for Africa’s insurance industry, as identified by the event’s participants.

Africa is experiencing significant migration from rural areas to urban centres. However, a question mark remains over how urbanisation will play out. Well-planned, inclusive and sustainable cities with adequate employment opportunities will boost economic growth and prosperity, leading to an increase in insurable assets. On the other hand, an influx of people into cities with crumbling infrastructure and a lack of jobs, could make them dysfunctional with high crime rates.

The connected consumer – new distribution channels and access to data

With sharp growth in internet and mobile phone penetration over the past decade, Africans are more connected than ever. Mobile telephony offers financial services providers a cost-effective distribution channel to target low-income, underserved customers. Throughout the continent there are already a number of companies selling micro-insurance products through partnerships with mobile network operators.

Improved connectivity also means a greater availability of data. If consumers are comfortable sharing personal data with insurers, it could allow for more effective pricing and underwriting of risks. There is however the danger that insurers are overwhelmed by too much data or that it is misinterpreted.

Changing consumer behaviour could have a profound impact on the insurance industry – both in terms of the assets people want to insure as well as the type of service delivery they expect from insurers.

Speaking at one of the event’s plenary sessions, futurist Jonathan Cherry noted that young people are starting to place greater value on experiences than physical assets. They are also embracing the shared economy. Cherry explained: “More and more people are saying, ‘I don’t need an Audi, I can just Uber an Audi. I don’t want to have the responsibility of owning an asset, because adding more assets adds more complexity.’” The type of assets that people do value is also changing – they might want to start insuring their Instagram accounts, for example.

In addition, consumers are demanding greater control – companies have to adapt to their needs, not the other way around. One participant noted that in the future people could expect to purchase insurance in the same way they request an Uber ride.

From online peer-to-peer insurance to new ways of accepting premium payments – fintech start-ups have the ability to disrupt traditional insurance. Technology is also enabling unconventional players to enter the industry. “Fintech entrepreneurs are a little bit like piranhas attacking the value chain. They take out the meaty bits as corporates watch their value chains being eroded,” commented Willem van der Post, managing partner at the Deloitte Centre for the Edge Africa, during a plenary session.

However, traditional insurers don’t have to sit on the sidelines as these start-ups eat their lunch. Fintech can be embraced by partnering or acquiring start-ups, establishing tech incubators, and investing in research and development. This will allow insurers to operate more efficiently, access untapped markets and exploit new income streams.

Geopolitics – a threat to trade

The past century has seen a significant rise in globalisation, with the world economy becoming more integrated and an intensification of cross-border movement of people, goods, and services. However, of late there has been a resurgence of nationalism, as evidenced by Brexit and the Trump candidacy. The rise of nationalist political parties in Europe has also raised concerns about the future stability of the European Union. This trend, together with conflict in the Middle East and religious terrorism, has the potential to stifle global trade, which would negatively impact economic growth in Africa, and subsequently the insurance market. On the other hand, if global instability subsides and growth picks up, it could attract new entrants into the insurance industry, presenting additional competition for the incumbents.

Inequality – will economic growth be inclusive?

Despite reports of a growing middle class, hundreds of millions of people in Africa still live in poverty – with low levels of education and little in terms of employment prospects. The extent to which these people can be brought into the mainstream economy could shape the environment in which insurance companies will need to operate. If meaningful job opportunities cannot be created, it could lead to further frustration and disillusionment resulting in protests and riots. While such a scenario could reduce the demand for general insurance, it might also prompt people to turn to insurers to protect their assets.

Extreme weather, drought and rising sea levels could impact both the individual and commercial clients of insurance companies, from seaside home owners to farmers. Although insurers have always covered these events, future success will depend on the industry’s ability to adapt to the speed of climate change. Current risk models might not be adequate to cover future climate catastrophes. An inability to adjust to climate change could lead to weak insurers exiting the market. There is also opportunity for companies to become specialists in climate change insurance.