Agriculture has long been the sleeping giant of Angola’s economy. The country’s biggest employer, it has consistently been neglected by a government more interested in the fabulous revenue-generating possibilities of oil. 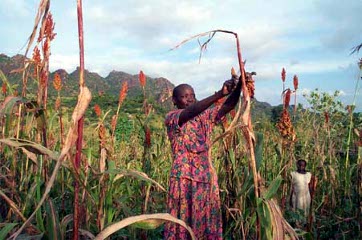 Angola has an estimated 35m hectares of arable land and considerable water resources.

That finally looks to be changing with the announcement of several grand schemes to establish new and old cash crops and invest in small-holder production to boost food supply, taking advantage of both Angola’s estimated 35m hectares of arable land and its considerable water resources.

Overall, the government is to invest $1.2bn in agricultural development from 2009 to 2012, financed by a credit line from the China Development Bank. The programme is aimed at bolstering food security and reducing costly food imports – a tough reform given the princely sums many politically-connected businessmen make from the latter.

Last year, secretary of state for agriculture Amaro Tati said that $350m would be directed toward small-holdings, with an emphasis on mechanisation and the provision of seeds and inputs.

Success is far from guaranteed. Agro-processing efforts at Vila Nova in the temperate Huambo Province have not performed as expected. Commodities like milk and flour, which Angola should be producing in abundance, are still mostly imported. A show-piece banana project involving Escom and the US company Chiquita collapsed because the land it secured to grow bananas was far from the southern port city of Lobito.

On the agri-business front, the ministry of agriculture has announced plans to revive colonial-era ‘income crops’ such as sunflowers, grapes, wheat, rice, palm and sisal for export and to boost rural employment. A key target is raising cereal output to 15m tonnes, most of which will be exported. The 2009 crop was estimated at just 1.8m tonnes, well short of the national requirement of 2.5m.

According to a government official, a grape-growing project is under way in Cunene Province, rice growing is being explored in the eastern province of Moxico – as well as a rehabilitation project of existing palm forests there – and work on a $40m cotton plantation in Kwanza Sul has begun.

Elsewhere, the National Institute for Coffee of Angola has pledged $220m to invest in the rehabilitation of coffee production in the provinces of Uíje, Kwanza Sul, Bengo and Kwanza Norte. Coffee is historically a key cash crop, but it is hard to see Angola competing effectively.

In May 2010, How we made it in Africa reported that US-based Gaiacor International has announced that it has signed a memorandum of understanding with MITC Investments to manage and operate large farming operations in Angola. MITC is a privately held business group in Angola interested in improving agriculture in its country. Gaiacor intends to combine its experience of modern cultivation techniques and sophisticated farming practices to produce high quality and profitable crops, while providing much needed jobs to the local labour force.

In the most ambitious privately funded project yet, Sonangol, Brazil’s Oderbrecht and Angolan company Damer launched a $258m food and energy venture called the Bioenergy Company of Angola (BIOCOM) in September 2009. BIOCOM will plant 30,000ha in Malanje with sugar cane and hopes to produce 30m litres of ethanol and 250 tonnes of sugar as well as 45 MW of electricity. Power will be directed to the domestic market, with the possibility of exporting in the medium term.