Like many other sectors of Angola‘s economy, the country’s telecoms industry has more than a few tales to tell. 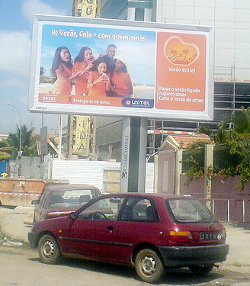 The destruction that resulted from three decades of war severely damaged the country’s fixed line network, which is still far from its potential.

The breakneck pace of technological advancement in mobile telephony, however, has had a more definitive impact on the local market, and leads the fixed line network by a significant margin, in volumes as well as revenues.

The importation of technology and skills transfer can also be attributed to Unitel’s partnership with Portugal Telecom, an
international mobile telecoms operator, capitalised at €6,5bn that has operations in Brazil, Africa and Asia.

The numbers are not small, and with over 7.5m mobile phone subscribers in total, Angola has one of the larger mobile telecoms markets in sub-Saharan Africa.

Penetration levels, at about 60% of the addressable population, point to further upside, and the duopoly comprised of Unitel and Movicel have embarked on multi‐million dollar expansion projects over the next five years to satisfy demand and expand coverage to areas that are still lacking.

Similarly, there is significant scope in the growth of data services, and following the very recent launch of 3G services and video conferencing, data services are set to take off too.

Unitel is the leader in the Angolan mobile telecoms market by a wide margin. With over 6m subscribers, Unitel is roughly twice the size of Movicel and offers the full spectrum of mobile telephony products, including GPRS, EDGE, UMTS, international roaming and recently launched 3G services which were showcased at the FILDA show in August 2009.

This is particularly impressive considering that Unitel started operations in March 2001. The mobile group is owned by Mercury (a subsidiary of Sonangol), Group GENI, Vidatel and Portugal Telecom, each with a 25% shareholding.

Turnover and EBITDA for Unitel increased by 38.1% and 50.2% in the first half of 2009, reaching US$362m and US$236m respectively, sustained by strong subscriber base growth in Luanda and in the country’s other main cities. Net additions of 383,000 were recorded in H109, increasing the number of clients to 4,955,000, representing an increase in the subscriber base of 37% year-on-year.

During the first half of 2009, the average number of minutes of use (MOU) increased marginally from 104 minutes per subscriber at an average ARPU of US$24.50, which is the highest in Africa and more than twice the regional weighted average of US$11.84. The nearest peer is Maroc Telecom, but Unitel’s ARPU is still about US$10 higher!

Unitel has recently announced a massive US$1.7bn network expansion and upgrade programme over the next four years.

This will see it extending its reach to areas not yet covered, as well as the laying of a fibre optic network across the country to improve bandwidth.

Currently Unitel’s network covers 138 of the country’s 168 municipalities and it expects to reach all of them by 2012.

Unitel will also be involved in a project to build the country’s first satellite by 2011 having recently signed an agreement with Russia to borrow as much as US$300m from Vnesheconombank, VTB Group and Roseximbank for its satellite programme.

In 2003 Movicel was created as the mobile telephony arm of the national telecoms company, Angola Telecom.

The company currently has a subscriber base of 2.5m, and in most respects seems to be lagging its larger rival; the absence of an experienced technical partner is probably partly to blame.

Nonetheless, Movicel is not resting on its laurels and the recent restructuring of the group may see them win back some market share.

Movicel has targeted the lower end of the market, offering entry level mobile handsets retailing at about US$30. In a country with ARPU’s of close to US$25, this is clearly an attractive proposal.

We estimate penetration levels to be around the 63% mark and whilst we don’t expect Movicel to take pole position from Unitel, we can envisage a more equitable sharing of the mobile market.

On 30 July 2009 The Council of Ministers approved the partial privatisation of Movicel whereby 80% of the company was sold for a sum of US$200m, a sum we think was a steal. Post the transaction the shareholding in the group was as follows:

Given the dearth of information on the company, it is very difficult to arrive at a ball park valuation for them and/or to compare them to regional peers in the sector.