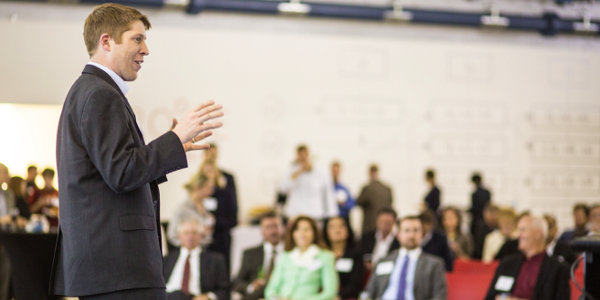 The entrepreneurial landscape in Africa is changing rapidly with more young people going into business, motivated by a growing sense of afro-optimism and the desire to solve decades-long challenges with new technologies. Incubation hubs have sprung up across the continent and more foreign investors are backing local start-ups. But it is still hard to be an entrepreneur in Africa.

Ross Baird, executive director of US-headquartered investment firm Village Capital, has been working with entrepreneurs across the globe over the last five years. It invests in social enterprises solving global problems, and runs business development programmes for early-stage entrepreneurs in agriculture, education, energy, financial inclusion, and healthcare. In Africa, Village Capital has trained 75 entrepreneurs and invested US$500,000 in 11 companies.

From his interactions with entrepreneurs on the continent, Baird has identified peculiar features of African entrepreneurship. One is the ability to see opportunities where others normally wouldn’t. He has also learned that because of the “incredible” challenges they face and limited support, Africa’s entrepreneurs are quick to change their business model and adapt to their environment.

“A lot of entrepreneurs are really stubborn to change their original idea, but African entrepreneurs just go where the opportunity is because they have no other choice. So I have learnt more about how to think quickly, and make quick decisions, and change your business model quickly from African entrepreneurs than from any other ones,” says Baird.

“I have seen entrepreneurs go down one business model that wasn’t working and because they didn’t have any money, they had to change the next day. One week later it is a completely different business and it is amazing. I ask ‘how did you do that? And they say ‘we have no choice, we have to do it, we have to keep surviving’. They are more positive, [yet they] have a harder path to success than [entrepreneurs in] any other region.”

Last month 12 entrepreneurs graduated from the Village Capital FinTech for Agriculture programme whose goal is to spur growth among local businesses offering financial services to smallholder farmers in Eastern Africa. Two start-ups – Rwanda’s Atikus Insurance and Ghana’s Farmerline – received $50,000 each at the end of the programme.

Opportunities to make a big difference

Africa is attractive to Village Capital because of the culture of optimism and the ability to scale solutions due to the continent’s big population and shared challenges.

“Think about what you can do for the hundreds of millions of smallholder farmers in Africa with an entrepreneurial solution? If you really want to make a big difference in people’s lives, I think there is a huge opportunity to do so here.”

At Village Capital’s accelerator programmes, entrepreneurs are trained on financial modelling, teambuilding, fundraising, how to build a sales pipeline and measuring their impact. They also learn basics like to how to write emails that don’t end up in the trash box.

“I often say ‘be concise’. If you send an email or a note, make sure it’s a hundred words or less. The average investor gets 100 emails a day. If they see a long email they will delete it. It is a small but really important thing – write short emails. If you talk to a person, listen before you talk and keep your comments short,” says Baird.

Over the next five years, Village Capital plans to invest in 20 more entrepreneurs in Africa. The goal is to “put entrepreneurs at the centre of problem solving”.

To scale their businesses, Baird advises entrepreneurs not to think as a “solo hero”, but instead to build teams and partnerships.

“One other reason I think a lot of companies to date haven’t scaled yet is they haven’t been focused on being competitive. If you have [social] impact and you’re a successful business, you attract better investors [and] you attract employees,” says Baird.

“I really encourage companies to use impact as a positive mission rather than as a trade-off between impact and financial returns – because if you lose focus on financial returns, then you are not going to be taken seriously by people.”